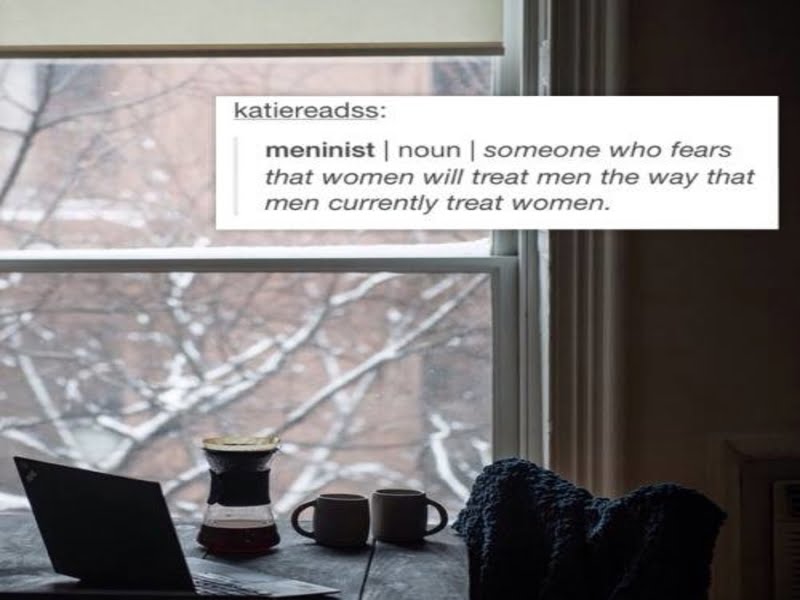 I often go through the woes of a ‘meninist’. These often include the stories of men who have been harassed or wrongly accused by the laws like 498A or due to excessive alimony demands by the wives that takes a toll on their financial standing.

These demands are absolutely legitimate. But try and understand what they are based on.

One of the aspects this is based on is, the idea that man can be the victim, something that our society refuses to acknowledge and digest.

When men come out with the problems they face, they are often subjected to a lot of ridicule and mockery.

They have been wronged. They have faced trauma.

They are bound to be jaded after such an unfortunate experience.

The second aspect that it is based on is, that it is always the woman who has been wronged. The way the laws against domestic violence have been chalked out, itself explains that the underlying idea is that women are always the victims.

WHY CHOOSE MENINIST OVER FEMINIST?

But why such men or people, in general, oppose the very idea of ‘feminism’ is what bothers me. They vehemently oppose feminism, saying that it is indeed “because of feminism” that they are in such a position.

They identify feminism as man-hating and associate more with the idea of ‘meninism’ i.e. the quest for men’s rights.

On the contrary, they should be the first ones to uphold the tenets of feminism.

The underlying problem here is that they perceive that the problem they face is because women are getting rights, or as some say, they play the ‘victim card’ or the ‘woman card’.

Let me clarify first (or yet again): that feminism IS NOT MAN-HATING.

Feminism gives women a level playing field. It demands rights that have been refused to women since forever and it rejects attitudes that put women (and men) in a mould made of prejudices and stereotypes. DO NOT CONFUSE FEMINISM WITH MENINISM!

Women still yearn for the rights and freedom that men have always had. The very fact that some men perceive THIS as oppression, reeks of the privilege that they enjoy. If the demands of men who have been wronged by their partners is that their abuse or trauma be recognized, then it is something that feminism stands for, not ‘meninism’.

Meninism, in essence, is the voice that pops up suddenly and screams “What about male rapes?” only when you talk about the increasing rates of crimes against women.

Meninism is still an offshoot of patriarchy that seeks to maintain the hierarchy of genders and rides on the toxic gender roles defined for each. Feminism recognizes that men have emotions and the right to break out of the stereotype that expects them to be devoid of any sensitivity.

If you wish that your woes be recognized by the society as legitimate, and therefore you call yourself a ‘meninist’, then you are actually a feminist, my friend.

WHO ARE YOU THEN? MENINIST OR MISOGYNIST?

There are two situations in which you oppose feminism. Either when you are a ‘meninist’ or a ‘misogynist’.

In the previous situation, if you are actually propagating or practising what has been mentioned above, then you are a closet feminist. Which means that you just don’t know you are a feminist or you refuse to associate with it openly.

This is because the term ‘feminism’ has been abused to a level that people refuse to identify with it.

If you do not identify as a meninist and are only in it for the heck of it, THEN my dear you are nothing but a misogynist.

Every time Kangana opens her mouth, you feel she is playing the ‘woman card’ or the ‘victim card’, that is because you are so habituated to see everything through the male gaze (reference: Laura Mulvey) that it is impossible for you to digest the perspective of a woman.

You have become so habituated to listening to or reading about crimes against women that a woman’s story of violence or abuse does not make a difference to your ‘desensitized’ nerves. And every story has gotten to sound like ‘just another story’ to you.

In this case, you are a misogynist.

FEMINISM LETS YOU BE!

It is feminism that allows you to live the life you wish to live, without putting you into a mould made of prejudices.

It is feminism that does not beat you up for not conforming to the stereotypes.

Now think, WHO ARE YOU?

But remember, picking a label does not define you. Your being does.

There do exist people who do not know the meaning of any of these terms but are practicing in actuality what you and I are talking about.

You May Also Like To Read:-
“It’s Easy To Hook Up In Corporate, Many Women Are Eager”: Misuse Of Women’s Laws In India Explained

Behind The Famous Indian Lyricist Of All Time, Here Are Few Things You Should...

Entertainment A Guest Writer - December 3, 2021
By Abhirami Pillai I was in my sixth grade when I found my Dad sitting on the couch watching one of his favorite movie of...