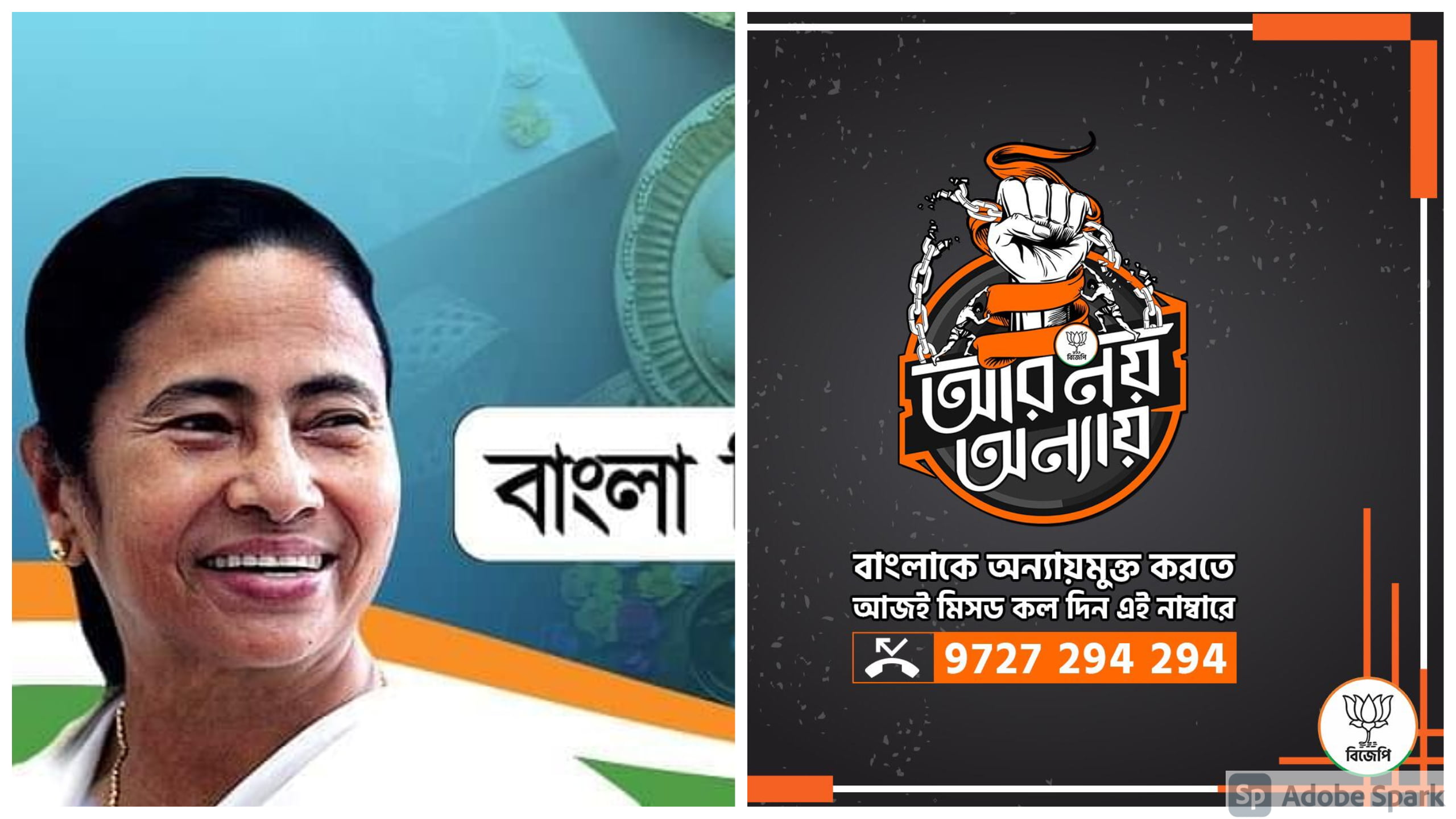 The elections for the gateway to Eastern India have marked a significant rise in the amount invested in marketing campaigns for both Bharatiya Janata Party and Trinamool Congress.

The use of audio-visual media in the form of television commercials defines this generation of politics in the most efficient of ways than any article ever can. The definition, in itself, shall be limited to being stoic propaganda, or libel, depending on how you look at it.

History has borne witness to a sweltering form of cash flow in the form of political advertisements since the dawn of the Information Society.

In the past decade, especially during the 2019 elections, it had become obvious that politics had now become a game of entertainment and gaud, rather than their manifesto and the usual drudge.

This situation of political parties using the audio-visual medium to further their political motivations reminds me of a certain man who formulated a sweatshop for unpaid interns, and the sweatshops were makeshift death factories.

Yes, of course, I am talking about Hitler. Just like the ‘stached man had his ‘films’, our political parties have the television.

In recent years, whenever the elections have come knocking, the common man has piqued their ears up only to listen to the din of their preferred political parties on news channels.

Any educated citizen with a slight inclination towards domestic know-how has been aware of the many political ad campaigns that have emerged on television.

The arrival of the elections also hearken towards the major national parties, the BJP and Congress splurging all their money towards their campaigns.

In Bengal, however, unlike other states, and even the national theatre of politics, the Indian National Congress’ marketing team has given way for Bengal’s proverbial (and self-proclaimed) daughter, Mamata Banerjee.

Didi has been instrumental in being one of the few reasons, apart from the regular poll disruption, for the saffrons not being able to enter the state.

However, this election has marked a significant rise in the BJP’s popularity and they have their ad campaigns to thank for that. It must also be noted that a significant half of the ticket holders in BJP are former TMC men, so it’s anyone’s guess as to where the wind goes.

However, when we are talking specifically about political advertising, the entire ball game which once consisted of politicians walking door to door, has now turned into an industry of profit and the slightest of slander.

An amount of 1.69 crores INR has been spent by the Trinamool Congress on Facebook Ads to further political campaigns on a wider scale. TMC’s campaign has been met head-on by BJP’s 25 lakhs INR expenditure to advertise on Facebook Ads.

Also Read: The Hindu Card: Why Mamata Banerjee Revealed Her Gotra During This Election Campaign

These instances of online ad campaigning have mostly been to slander their opponents’ name or propagate their professed leaders to an almost God-like stature, and I am looking at both the parties.

The instances of slander have not limited themselves to the chasms of the web, they have also found solace on the idiot box with the blaring “Aar Noye Onnaye” (No more injustice) of the BJP trying to overpower the radio jingle of TMC’s “Bangla Nijer Meyeke Chaye” (Bengal Wants Its Daughter).

The intermittent usage of mud caking the competitor’s image in front of an entire nation has been a natural mainstay in the many years of Indian politics.

Most of us have even referred to our years in our high school’s student council to understand the tomfoolery that is Indian politics. Unfortunately, it has brought about little fruit.

Political Campaigns On Popular Media A Form Of Propaganda?

The answer, in itself, is two folds. One half of me wishes to say, yes, it is, and the other says, it is but on the softer side of things. Honestly, there isn’t a clear-cut answer as such.

Political campaigns on popular media are necessary because at the end of the day a political party needs to publicize itself to make it more relatable to the citizens of the state.

Nobody wishes to be a stranger in a land they wish to rule over. However, what it also means is that the parties advertising themselves know no bounds on how they are to project themselves.

What they do know is that they have a piece of land and they need to conquer it by hook or by crook, and unfortunately, ours is a democratic state. You can always capture a poll booth but they have already tried that.

Hence, it all comes down to advertising but when they advertise, they do not put forward what they shall do or will do. The BJP projects the decades of ‘apparent’ misgovernance with the hulking baritone assuring the citizens that they won’t be facing injustice anymore but they never state what they plan to do.

The BJP is then rivalled by a hulking head of Mamata Banerjee who has projected herself as one of the greatest Bengalis that ever lived, and the party knows no better.

The projection of a human being larger than life and much bigger than the State itself, calls for voters to proceed into their booths and press the button.

The rabbit hole of politics only leads further down a labyrinth one can sparsely get out of. This, however, is time for the Election Commission to actually spur its head and work. Popular media is not a tool to brainwash but to educate, and it is time for the country to realize that.