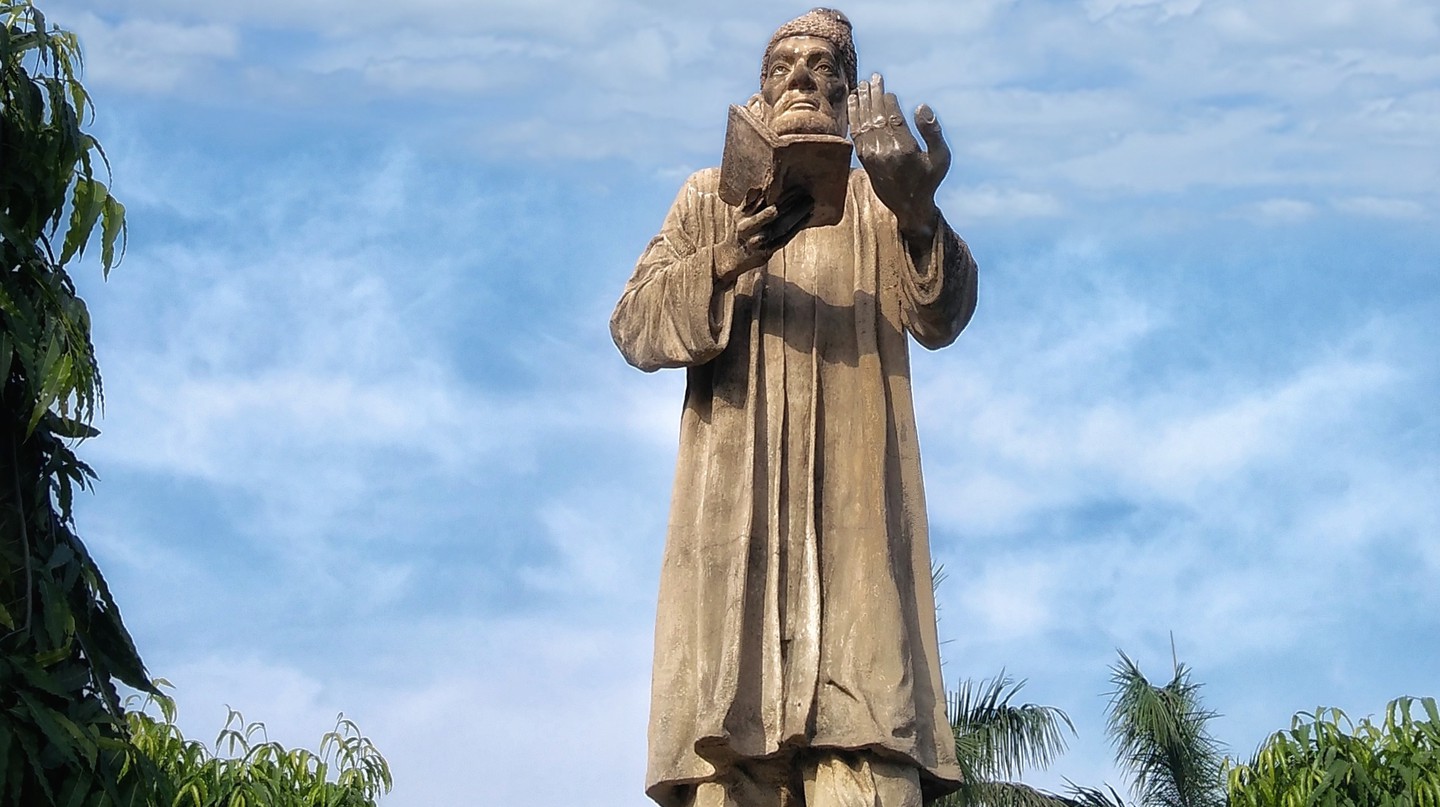 (Your eye penetrates to the (real) beauty of the world—
Life’s vitality is concealed in every element.)

Today marks one of the most tragic days in the world of poetry and art as it suffered a harrowing loss, that of the Urdu connoisseur of the written word – Mirza Ghalib. He is the Giant of Urdu literature and his loss will be immensely palpable in the years to come.

It can be seen that the Ghalib Ki Haveli, that is, Mirza Ghalib’s residence, is jam-packed with people. The large compound of the Haveli with columns and bricks is reminiscent of the Mughal Empire in Delhi. The walls are adorned with the huge portrait of the poet and his couplets which are hung around the side walls.

Huddled, at one corner of the Haveli, one can see the former owner of the Haveli. Name unknown as he has refused to talk, he was a hakim that is a traditional physician who was such an ardent lover of Mirza Ghalib’s poetry that he gave away the mansion to him.

Mirza Ghalib was deeply loved and admired for the way he has changed the course of Urdu literature. Not only did he enrich the Urdu language by broadening its semantic possibilities, but also introduced some philosophical tools of skepticism, irony, and constant questing.

His household consisted of only two staff members – a manservant called Kallu, and a maid named Wafadar. According to Kallu,

“When it came to his drink, Ghalib was very particular and I have been trained to make it to his satisfaction. Mixed with rosewater, the spirit had to be poured into a bowl of clay called aab Khora. The aab Khora would then be covered and buried in the earth or kept afloat in a pool of water for a couple of hours before it was time for Ghalib to have the drink.”

According to these servants, Ghalib was quite fond of Chess and loved feasting on mangoes at any time of the day.

Today this beloved man passed away at the age of 71. Although one might argue that it wasn’t a peaceful death given the fact that he was greatly in debt, frail in health, and extremely mentally disturbed.

However, to attain this momentum, he had to live through some of the darkest of nights. Let’s dive into his past and see what made him the man that he is today.

Originally known as Mirza Asadullah Baig Khan, Ghalib is a prominent Persian poet of the Mughal Empire and was born in Agra, Uttar Pradesh, on December 27, 1797.

At the ripe age of only 11 years old, Mirza Ghalib began composing poetry. He was bilingual and spoke in both Turkish and Persian languages. However, Urdu was his mother tongue. He learned Arabic and Persian logic and philosophy from a newly converted Muslim tourist namely Abdus Samad, who came from Iran and stayed at his home in Agra.

Mirza Ghalib was a handsome man with a fair complexion and broad build. He was a genius with the gift of poetry and prose.

Urdu had become the language of the court by 1850 where Ghalib regularly participated in mushairas. Eventually, emperor Bahadur Shah Zafar, who was an accomplished poet himself, acknowledging Ghalib’s talent and achievements, appointed him as his poetry mentor at the death of Ibrahim Zauq. Mirza Ghalib gave him poetry lessons. That’s how Ghalib became the court poet of Bahadur.

In fact, it was the emperor who gave him the title “Mirza Nosha” from which he added the Mirza to his name.

He was a broad-built, fair-complexioned, handsome man. However, irrespective of how talented a person is, they’re not without their flaws. Outwardly, Mirza Ghalib had a hedonic pleasure-seeking disposition and indulged in drinking and gambling.

He consumed alcohol regularly, so much so that one of his diary entries read that he could not sleep without his regular dose of alcohol. Apart from that, he indulged in gambling and was jailed for a month for conducting an illegal gambling den.

Read More: In Pics: Shayaris Of Mirza Ghalib That Made Us Fall In Love With Urdu

The British Influence On Mirza Ghalib

The Persian letters of Ghalib boast about his appreciation for the British. He came in contact with several British officers of India in whom he found efficient administrators and good human beings.

His personal contact with them made him their great admirer and he considered them his friends. Undoubtedly the British were the new paymasters of Mirza Ghalib.

However, it all changed when his only source of income was cut in half.

Ghalib used to receive a pension from the British government after his uncle’s death, which happened to be his only source of income. Eventually, he was suspected of his loyalty towards the British, thereby leading to the withholding of his pension followed by the termination of it.

Ghalib traveled to Kolkata around 1825 and pleaded his case to the Governor but to no avail. He made acquaintances with many Urdu poets in Lucknow, Banaras, and Kolkata, but he did not succeed in restoring his pension.

During this time, Ghalib wrote in ample amounts to his friends. The collection of these letters forms a crucial asset to his literature. Ever since the mutiny of 1857 and its aftermath where bloodshed and extensive destruction followed by the British accession to power was the only framework, he had been subjected to extreme stress.

He helplessly watched the death of several of his friends including the death of his own younger brother Mirza Yusuf Ali, who was mentally afflicted, was a victim of a bullet, and had to be secretly buried.

His beloved city – Delhi was no less than the land of the dead shrouded by dirt and debris.

Mirza Ghalib And His Poetry

The popularity of Ghazal is what makes Ghalib’s appeal more enduring. Initially, Ghazal found its origin as an art form in Arabia but now has become an innate part of Arabic, Persian, and Urdu literature.

The dense texture of the Ghazals and the way they delve deftly into the subtle nuances of universal themes such as love, loss, betrayal, and Sufi mysticism is what sets Ghalib apart from all his contemporaries. His verses lend themselves to a multiplicity of meaning such as the following lines:

What makes Ghalib’s persona majorly alluring is the accretion of myth around his persona about his non-conformity and unorthodoxy.

Mirza Ghalib has more often than not been described as a definitive, pluralistic squanderer who lived an unorthodox life. One such story backing this claim includes the time when an orthodox person told him that the prayers of those who consume liquor are never answered.

Now mind you, Ghalib was a connoisseur of French Wine. So he retorted that a man who already has an adequate amount of wine does not need to pray for anything else. Such stories make his life seem far more exciting and colorful and endear him among people of each age.

The best poems of Ghalib’s were written in three forms – them being, ghazal, masnavi – moralistic or mystical parable, and qasidah – panegyric. Ghalib took the concept of ghazals and changed them from an expression of anguish in love to philosophies of life.

He has written over 11,000 Persian poems in Persian while also writing over 1,700 Urdu poems.

As Professor John Keating of Dead Poets Society had rightfully said, “We don’t read and write poetry because it’s cute. We read and write poetry because we are members of the human race. And the human race is filled with passion. And medicine, law, business, engineering, are noble pursuits and necessary to sustain life. But poetry, beauty, romance, love, these are what we stay alive for.”

Mirza Ghalib was a poet who was way ahead of his own era. A capricious literary genius whose work transcends the confines of time and language, Mirza Ghalib will exist as long as love continues to prevail in mortal life. His poetry cannot be restricted to a particular period or language or geographical boundaries.