January 26, 1950: The melody of conch shells and reverberating drum beats couldn’t be stopped by the chilly weather on Thursday morning. The 1929 oath of purna swaraj of India has been ultimately achieved, thousands of humming crowds gathered across the streets of Janpath.

The news of prabhat pheries in different localities buzzed in the air. The crowd was anxiously fidgeting their hands waiting for the grand celebration. Turbans peaked in between the crowd, children sat upon their parent’s shoulders. Some elders wrapping their fingers tightly to their walking sticks, gazed softly in relief with teardrops on their wrinkled faces.

Exhilaration and excitement pervaded them, what is going to happen? What has Delhi prepared in the past few weeks?

Chakravarti Rajagopalachari, the 34th and last Governor-General of India read the proclamation announcing the birth of the Republic of India. Dr. Rajendra Prasad, the new president, took the oath to office in independent India. At first, he addressed the 500 guests in Hindi and then in English at the Durbar Hall in the Government House.

He said, ” Today, for the first time in our long and chequered history, we find the whole of this vast land brought together under the jurisdiction of one constitution and one union which takes over responsibility for the welfare of more than 320 million men and women who inhabit it.”

Thereafter Jawaharlal Nehru and the other cabinet ministers swore their oaths. After the proclamation ceremony, Dr. Rajendra Prasad arrived at the Irwin amphitheater from the Government House riding in a state coach drawn by six Australian horses.

A mother in the crowd pointed out to her child, “See the open buggy has the Ashoka emblem, earlier the British Royal emblem was used.” The child jumped in jubilance, the hoisted tricolor flag beamed at her. 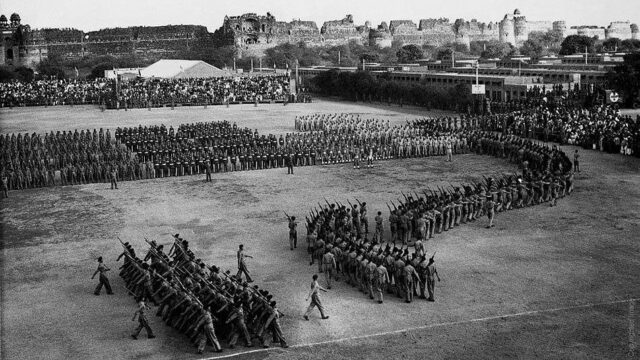 The cavalry escorted Dr. Prasad, he greeted the roaring crowds with folding hands. Many prominent dignitaries stood alongside. The chief guest, President Sukarno of Indonesia and his wife were welcomed with affability.

When Dr. Prasad reached the stadium, he was ushered with 31 gun salutes by the artillery. Afterward, on a jeep, he took a round of the amphitheater to salute the 3000 members of the armed forces.

The armed forces started the magnanimous parade from Irwin amphitheater overlooking the Purana Qila to the Red Fort. The Indian Airforce’s liberator airplanes flew above, the crowd sprang their heads in cohesion.

The Indian Navy took part in the procession, the people looked at the military vehicles mounted with heavy guns in awe. The tableau depicted Indian history from epic heroism to modernity. 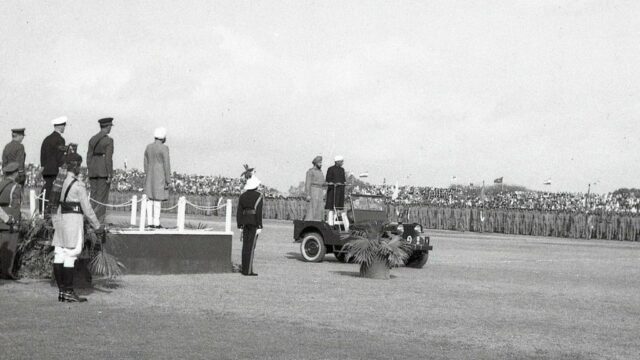 Four Param Vir Chakra were awarded by the president to soldiers for gallantry in the Jammu and Kashmir operations. The crowd applauded with pride, their jubilance was indescribable. They chanted loudly, “Jai”.

The spectacle of the grand parade came to an end after pledges and singing the national anthem. The crowd post the two-hour event entered the streets of Delhi with rising aspirations and pride of nation on their faces. Connaught Place was filled with people, shops and restaurants stayed open till late. Rashtrapati Bhavan danced in lights, India was at her full capacity now. 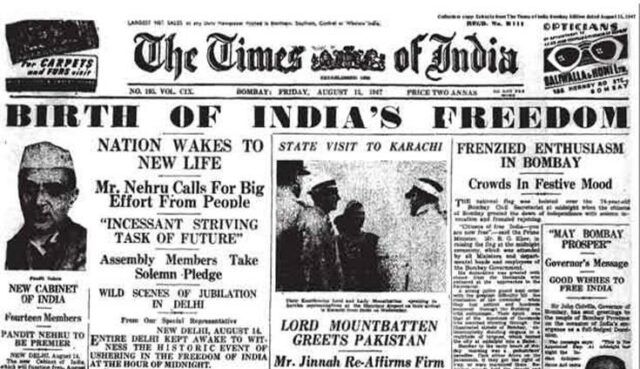 India became a sovereign democratic republic. Dr. Rajendra Prasad was sworn in as the president of the nation. The drafted constitution came into enactment on 26 January, as it was on this day the Declaration of Indian Independence was issued by the Indian National Congress against the imperial forces.

On January 24, the drafted constitution after repeated sessions and changes was signed by the 308 members of the constituent assembly. The constitution led by the chairperson of the drafting committee B.R. Ambedkar provided a guarantee of fundamental rights and instruction of duties to citizens of India. The longest handwritten constitution in the world has illustrations inspired by murals of Ajanta caves.

The formulation of nationalism on the cost of abandoned lifeless bodies from Lahore to Dhaka has created transnational trauma. Post-colonial India was burdened with the loss of land and blood of people floating berserkly in the subconscious mind.

The Republic day parade was a salute to those who have been lost, to those who were standing together in the crowd. The sovereignty was a promise to the future, has modern India in 2022 held onto the values of our constitution?

Source: Author’s own opinion, The Heritage Lab & The Quint