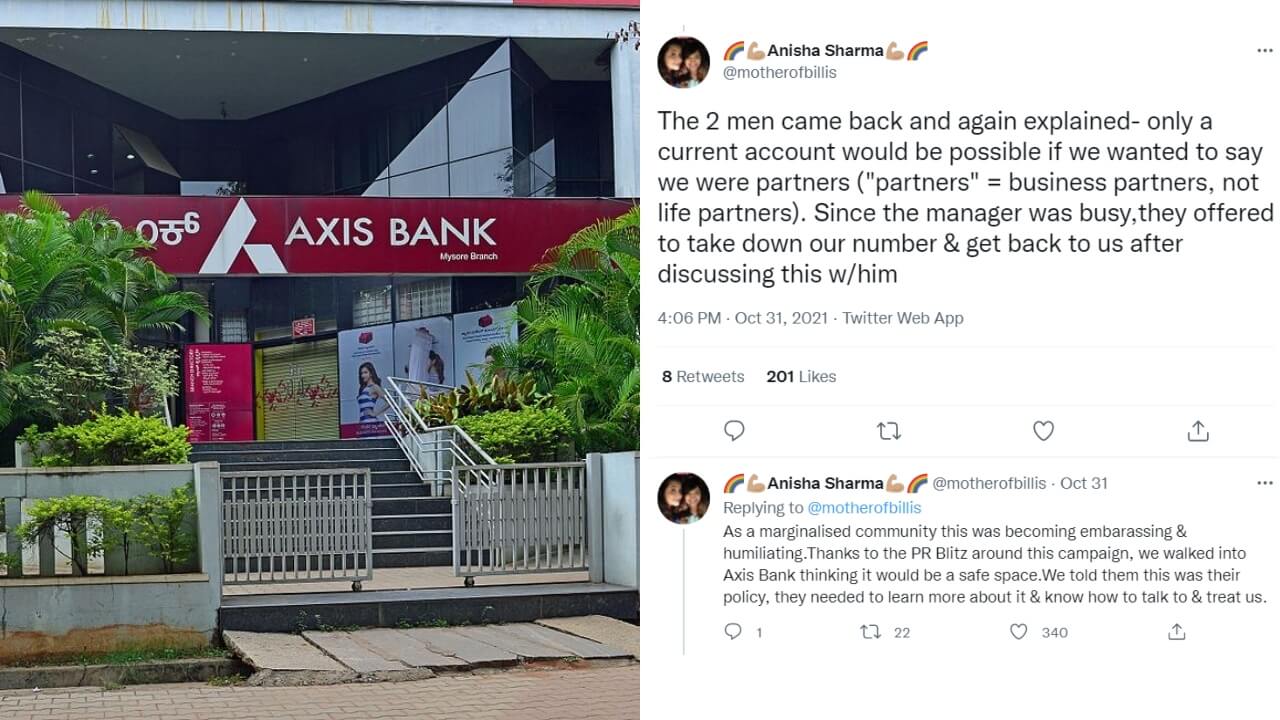 The Indian LGBTQIA+ community has rejoiced the much awaited Supreme Court verdict ever since it came out in 2018.

That they wouldn’t really have to hide their sexual orientation any more of fear of police or other authorities taking action against them, led to a wave of members of the LGBT community to finally be out and proud as they wanted to be.

Sure, not everything might be as wanted till yet, we still have milestones like same-sex marriage and same-sex couple adoptions to cross, but things seemed to be looking up. In light of this, almost every Pride Month and the anniversary of the decriminalising of homosexuality in India, brands went crazy.

They had such a big opportunity to capitalise on this huge market that was waiting for representation and were willing to spend money on them. Brands came out with LGBTQIA+ friendly merchandise, advertisements, companies splashed around in the media about LGBT friendly policies they were introducing.

Among these was Axis Bank that just in September this year, on the third anniversary of the verdict brought out their ‘DilSeOpen’ campaign and rolled out several ‘ComeAsYouAre’ policies for their LGBTQ employees and customers.

However, it seems that they didn’t really plan on upholding their lofty claims, as a Twitter thread states the opposite.

Twitter user Anisha Sharma who hails from Mumbai, posted an alarming Twitter thread on 31st October 2021 about her and her partner Bhakti’s experience at Axis Bank when they visited a branch while trying to open a joint savings account.

From confusing them for business partners and then outright refusing to open a joint savings account since they weren’t blood relatives, Anisha claimed that it was an extremely humiliating and embarrassing situation.

Read More: Know Your Rights As A Member Of The LGBTQ+ Community In India, Before You Decide To Come Out

In one tweet she wrote, “One male officer asked what our relation was to each other. We informed them that we were partners. Immediately to this they said oh you want to open a current joint account, incorrectly assuming we were business partners. We clarified that we were same-sex partners, and told them about #DilSeOpen and #ComeAsYouAre.”

Further down she wrote, “As a marginalised community this was becoming embarrassing & humiliating. Thanks to the PR Blitz around this campaign, we walked into Axis Bank thinking it would be a safe space. We told them this was their policy, they needed to learn more about it & know how to talk to & treat us.”

Some online comments stated that Axis Bank just rolled out the policy before properly implementing it since as per the rules you can only open joint savings account with a ‘family member’ or spouse given you have the proper documents to prove that they are your blood relative through some certificate or paper or for the latter a marriage certificate.

Given that same-sex marriage is not yet legal in India the bank should have had some other provision in place for LGBT couples to prove their status since ‘boyfriend or girlfriend’ is not exactly a valid or authorised status in India.

This seems to be more like a case where the bank headquarters just wanted some big announcement ready for the anniversary of the verdict and hurried to get it out to grab the attention of the people but had still not put in the necessary steps in place that LGBT couple would have to follow if they wanted to avail these policies.