Bollywood or better yet the Indian film industry is no stranger to taking inspiration… *cough* copying *cough* from foreign films. Over the years we’ve seen blantant rip-offs of western films being made in Indian cinema with such confidence, as if no one will ever realise it’s a copy.

In recent times though, some filmmakers have gotten a little creative though and call their copied films either ‘inspired from’ or ‘adapted from’ the original source. It’s good that at least they are giving credit to the original film, however, that is not always done.

The film had a pretty interesting concept of how victims of sexual abuse and crimes all go to a single house after their passing away. However, it seems that the story line is not entirely original.

Was The Film Copied?

A Facebook post by a man called, Abhishek Rai, popped up on my social media and made me do a double take. His post said that,

Here’s something I’d like to bring to everybody’s notice.
We at AndaKurry Productions, made a short film when we were in film school, 2 years back called ‘FOUR’ that dealt with a premise of rape victims sitting together in a room when a new victim arrives.

And yesterday, a film named ‘Devi’ was uploaded to LargeShortFilms’s YouTube channel that has heavy resemblance and the premise is also of the film we made.

Of course our film was a student film, with very little production design, bad audio and stuff, but still it’s a child of our own imagination and it’s ruthless how anyone can just pick up a piece of thought and claim it to be theirs.
The film is an intellectual property of Asian Academy of Film & Television.

Now, I have not been contacted by large short films or the makers of the film regarding any kind of query. This saddens me and I’d want your support to be heard so we can take action against the makers and the platform.

Rai a former student of the Asian School Of Media Studies (ASMS), Noida Film City had written, directed and edited a short film called ‘FOUR: Asifa Rape Case’ back in 2018.

The film was posted on AndaKurry Production’s YouTube channel on on 31st May, 2018.

Interestingly enough ‘Devi’ seems to share the exact same story with the student film. In the student film, in after-life, three women who were victim to sexual abuse are living in some kind of a house and talking about how to move forward now.

It seems ‘Devi’ also copied the ending from ‘FOUR’ where a really young girl makes her arrival, shocking the residents and audience alike, giving them a harsh reality check. That even such young girls, either an infant or barely a few years old, are not safe from such sexual crimes.

You can see ‘Devi’ too here, to make a comparison for yourself:

Rai posted first about this alleged plagiarism on 3rd March, 2020, where he also said that the story and concept of the film was the intellectual property of ASMS.

In another post that he put out yesterday, he implored the students of ASMS to come out and speak out against this injustice.

This issue also caught the attention of Khalid Mohamed, an employee at Khaleej Times, who said that,

“ITTEFAQ?..GREAT MINDS THINK ALIKE?…or “INSPIRED”?….Priyanka Bannerjee’s short film DEVI (starring Kajol)…n ABHISHEK RAI’s much earlier 4:ASIFA RAPE CASE...seem to be based on same plot premise. RAI has asked on Twitter,”I found striking similarities of premise and basic story of DEVI to my film FOUR. I’d really like to have an explanation from the makers.”

Truly think we need to support ABHISHEK RAI on this one, n would really like to hear an explanation from Ms Bannerjee.”

Abhishek Rai also posted about this on Twitter, calling out the makers of ‘Devi’ and asking for an explanation for it.

@LargeShortFilms @ElectricApplesE #PriyankaBanerjee
So I found here striking similarities of premise and basic story of #Devi to my film #FOUR. I'd really like have an explanation from the makers. https://t.co/Oz0ncuDVCE

To be honest, I’m not denying that there were some changes in characters, dialogue and certain other things in ‘Devi’ and ‘FOUR’, both the films are very important and need to be seen to get a reality check.

But at the same time I cannot help but think about how unfair the writer and creators of the original film must be feeling. ‘Devi’ is being hailed as a cinematic masterpiece, a must-watch and already has over 5 million views on YouTube. 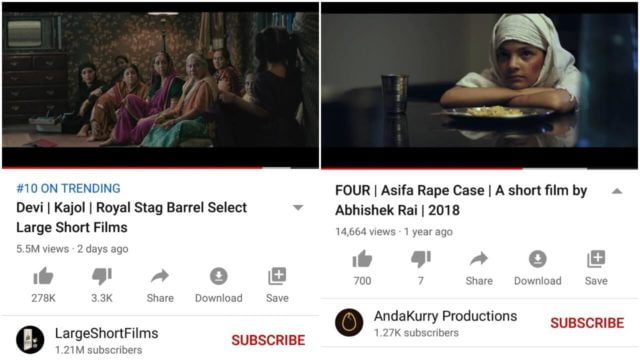 I believe, at the very least the makers of ‘Devi’ could have added a shoutout or line at the end saying that they were inspired from the story of this particular short movie.

Not denying that both the movies are important and very impactful in their own way, but I certainly believe that Devi should have acknowledged the origins of the main story.