Batla House is based on the incident of encounter against the Indian Mujahideen terrorists which took place in New Delhi in 2008. However, it was accused to be a fake encounter by a section of the population which made the incident extremely controversial.

The movie covers the difficulties that DCP Sanjeev Kumar (John Abraham) and his mates from the investigation team are put into, both in the process of determining the validity of the encounter as well as in duty.

As a liberal millennial, I am not the biggest fan of jingoistic, over-patriotic movies which promote the ‘popular’ narrative of nationalism. By ‘popular’, there shouldn’t be any doubt whether I am directing my criticism towards the established notion of nationalism, because yes, I am.

Going by that I should have been squarely irritated by Batla House due to its underlying agenda being an encouragement of one’s responsibility towards the nation. Not that such sort of messages or values are problematic.

What is problematic, however, is boxing of these values within a fixed set of ideas, which considers any alternative idea as necessarily being a threat to the nation. Also, we need to understand that there are a lot of ifs and buts in the actual functioning of our society.

What the system finally does is drill people to the extent that they are reduced to be sufficed by minimalist goals, since a larger goal as ‘responsibility towards one’s country or society’ has the possibility of swiping people off many things.

This is why I often feel that the representation of patriotism in movies remains limited to being suitable for reel life rather than real life. 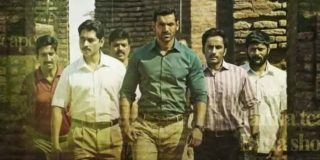 And this is where I believe Batla House exactly stands apart. The movie covers the problems of two areas.

Firstly, the difficulties being faced by those within the system to work for the country and its people, even if they genuinely intend to.

This happens because they are pressurized by the upper echelons of the system, who are essentially keeping their political motive as their priority over the welfare of the people.

Moreover, they are constantly bashed by the public as well because of the impression that since the system is necessarily corrupt, so the officials being part of it do not stand to be imprinting any other impression. This ultimately cripples them to work on issues of society as they are sandwiched between two different sorts of pressure.

Secondly, we complain of the imposition of an overarching structure on our society which is right, but at times even we need to look beyond this perspective. We get blinded by the fact that every action being taken by the authorities is under that particular structure.

When we do that, we do not stand to be any different than those imposing the superstructure. Since we do not give space to the other side to express itself and base our actions entirely on our assumption.

This is exactly, why the movie clicks in by portraying the two above stated problems diligently. It represents the first problem by showing a police officer being controlled, ridiculed and pressurized by political power which limits his scope of action. It represents the second problem as well.

The officer’s genuine action against corrupt individuals of a minority community in the movie is shown as being looked at from the lenses of the target against that community. Again, this happens because attacks on the minority are also evidently present in our society.

Also Read: I, A Millennial Need Forced Nationalism Since I Find Faults In Everything

The movie has shown the importance of giving an ear to both sides of any issue but it didn’t show that holding negative perceptions against the system is wrong. It showed no sort of bias to any section of the society be it the system or the liberals or activists.

The very negative perceptions against the system have after all sprung out of facts.

Why was the Batla House encounter even accused of being a fake one? Because fake encounters have taken place leading to the death of innocents.

Why could a political group manipulate it as another threat to the minority? Again because minorities are targeted in our society be it in terms of community, gender or whatever criteria.

Because these things have happened, both groups of society, be it the concerned ones or the manipulative ones, have after all based their actions on a certain phenomenon.

Again portrayal of the officer in the movie as suffering from Post Traumatic Stress Disorder (PTSD), due to accidents springing out of security tasks was another important thing that the movie pitched on. The fact that authorities are also impacted by their violent actions was one important message.

Also, the glimpses of the officer losing his zeal due to external scenarios.

It again points out the nitty gritty of any particular issue which needs to be looked into before bashing on.

Lastly, the friction in the personal relationships seemed very apt as it involved a wife who was upset regarding the growing distance with her husband.

But at the same time rooted in the determination of empowering him and making him stand firm on what he desired to do.

Another significant idea which sprung out of the movie was the apt representation of perceptions of different groups of people.

As a student, I could personally relate to the rage of students being shown in the movie against the system.

It showed how repeated actions of neglect by authorities frustrates the public especially the students.

So lastly, the movie was an appropriate presentation of balance between values and realities.