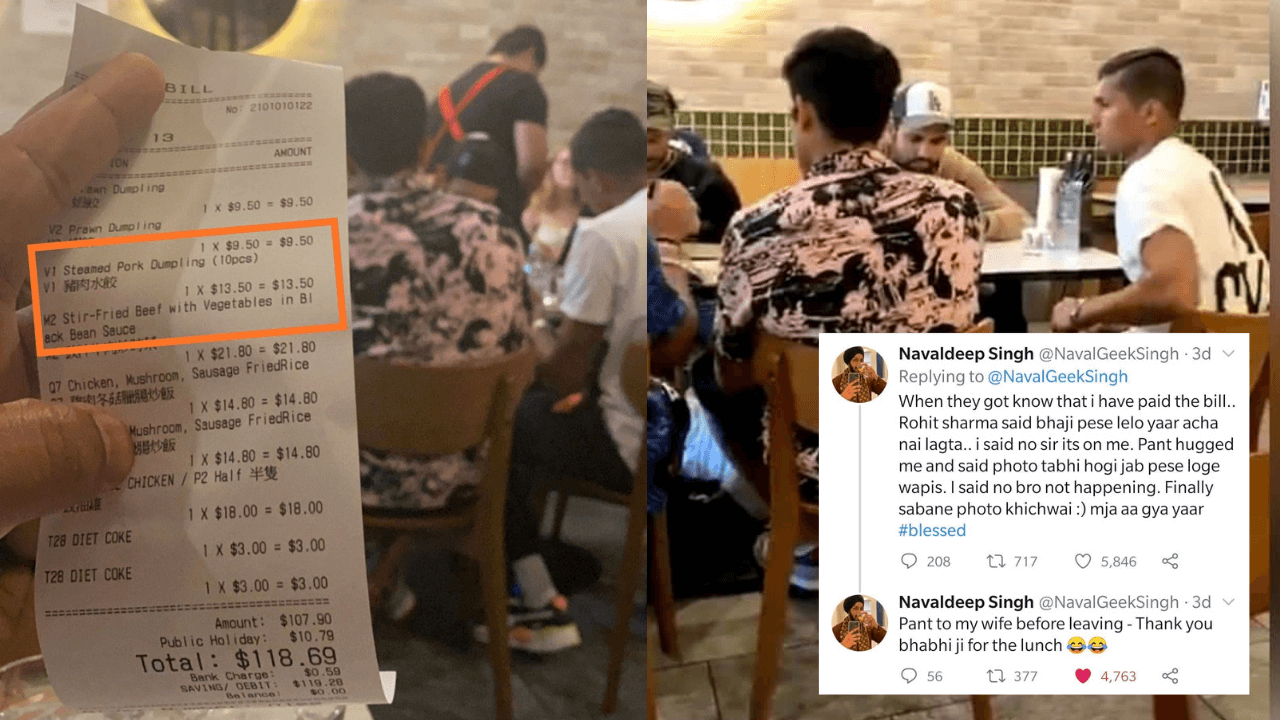 The Indian cricket team is in Australia for the ongoing test match series. The players had to follow strict COVID guidelines for quarantine ever since they entered the country.

Preparing for matches in Adelaide, Canberra, Sydney, and Melbourne provided the players with a little more freedom, according to the city rules.

A video of them went viral where the five cricketers were seen eating inside a restaurant in Melbourne on New Year’s Day. 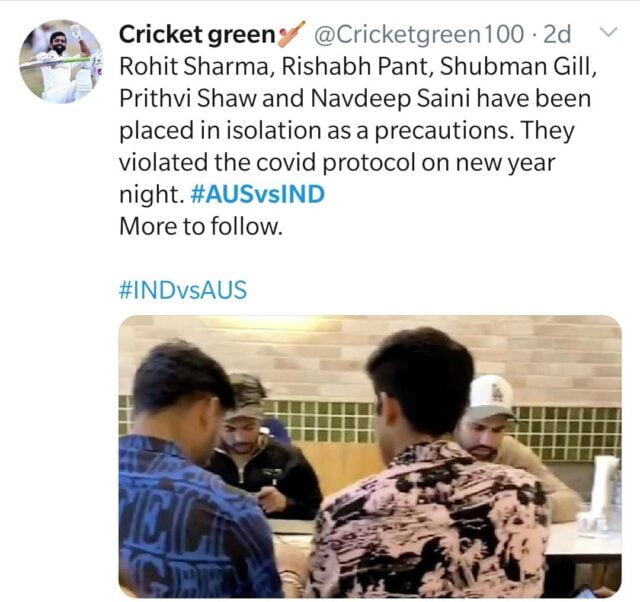 It all happened when a fan noticed the cricketers and shared their video on Twitter, he also paid their bill and posted a snippet of the conversation on Twitter, where he also mentioned that Pant gave him a hug. 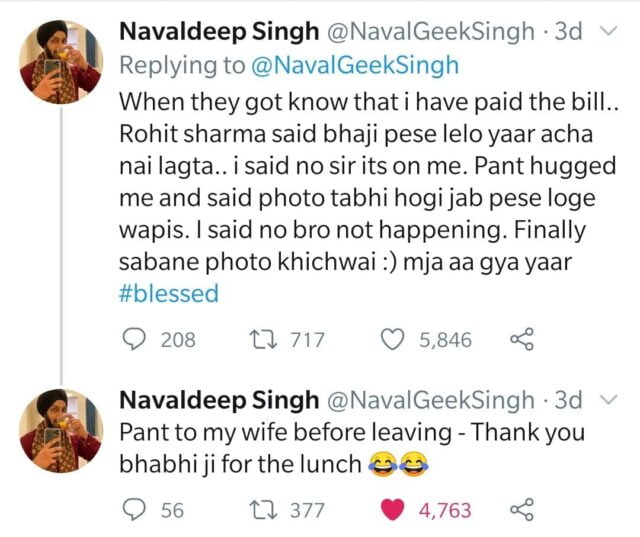 Later, Navaldeep Singh clarified on Twitter that Pant never hugged him and what he said earlier was all in excitement.

As per COVID-19 guidelines given by Australian authorities, players can sit outdoors in restaurants and avoid getting in touch with anyone outside their bio-bubble environment.

BCCI defended the players and said, “The players were standing outside the restaurant and due to drizzle, they had gotten inside. If this is a way of trying to unsettle the team before the third Test, it’s a bad ploy by Cricket Australia.”

The official continued to state that, “We can only term it as a malicious spin by a section of Australian media and this has started after their humiliating defeat.”

The Australian and Indian cricket authorities are investigating the issue, meanwhile, the third Test is set to take place on 7th January in the Sydney Cricket Ground.

The hug and the outing caused a lot of controversies but Indian fans were more enraged when the food bill was shared on social media. A fan pointed out that the bill consisted of a dish made from beef.

As if not following the COVID guidelines wasn’t controversial enough, the outing to the Melbourne restaurant brought in a new reason to make people angry.

While the cricketers were being questioned for their visit to the restaurant by the authorities and the media, an unverified picture of the bill went viral on Twitter and other social media platforms.

The bill was paid by a fan, who also had tweeted the video of the cricketers.

The picture of the bill mentioned a beef dish, over which, people on the internet bashed the team members, especially the vice-captain, Rohit Sharma.

The bill also mentions a pork dish. Consuming beef and pork in Hinduism and Islamism is considered unholy and sinful, thus causing an uproar on Twitter.

Rohit Sharma was termed a ‘hypocrite’ for being an animal rights activist and then consuming pork. Comparisons were also made with Virat Kohli, who has turned to veganism.

Also Read: How Football & Cricket Is Slowly Getting Back On Field Post COVID-19 Lockdown

Some people bashed the cricketers: 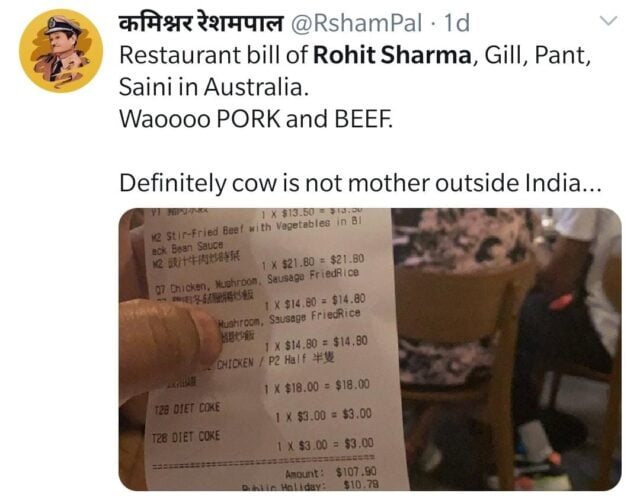 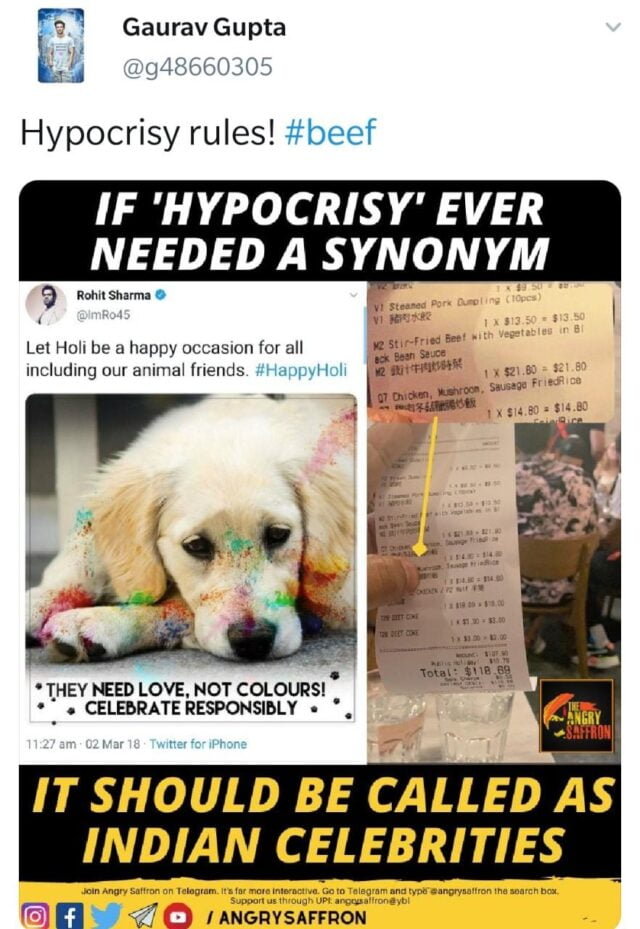 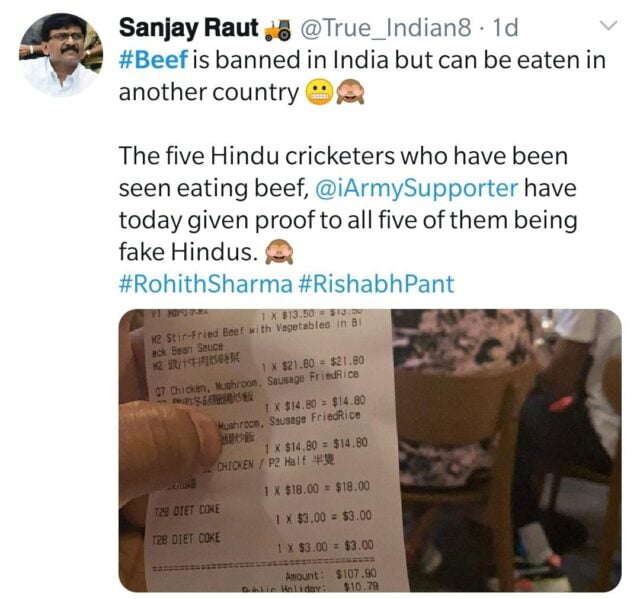 Some people supported team members and stood with Rohit Sharma: 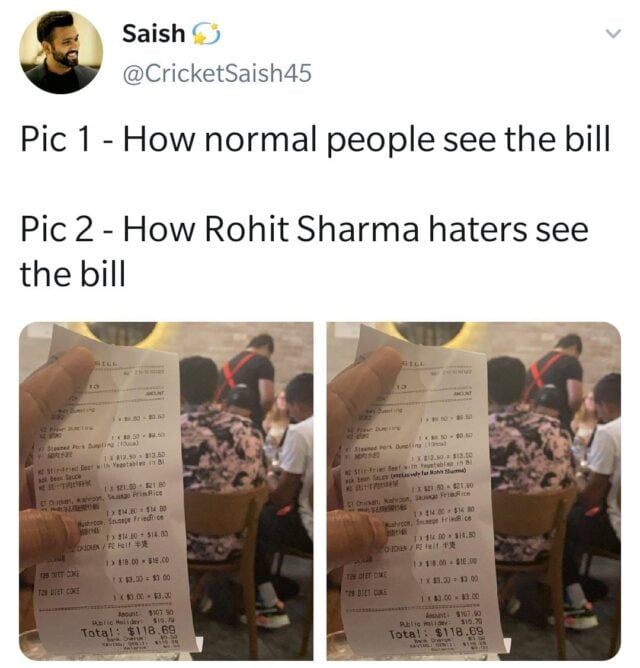 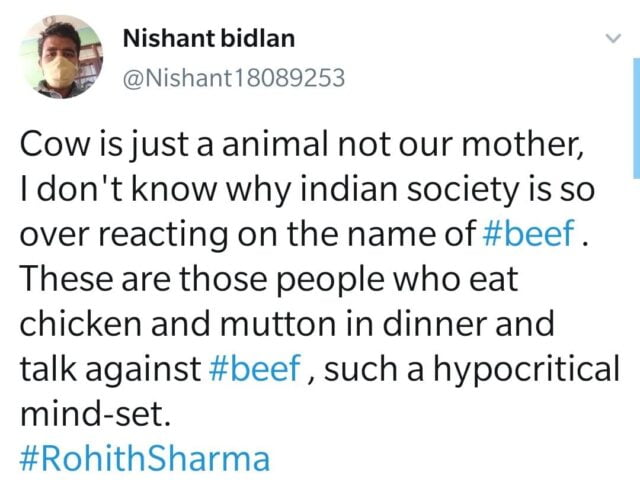 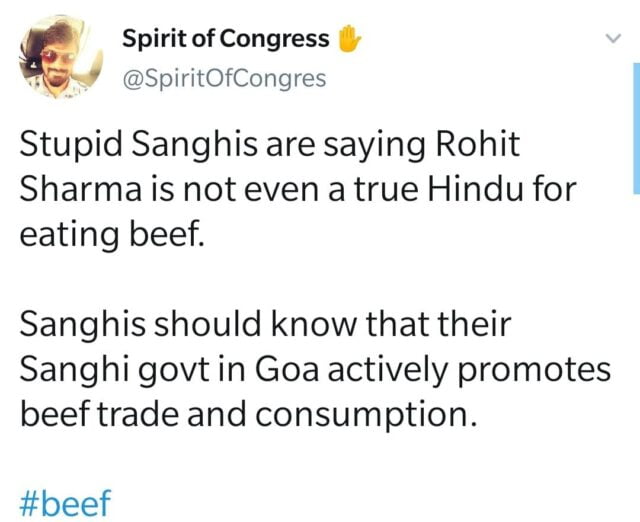 Others just indulged in making fun of the situation and point out ironies: 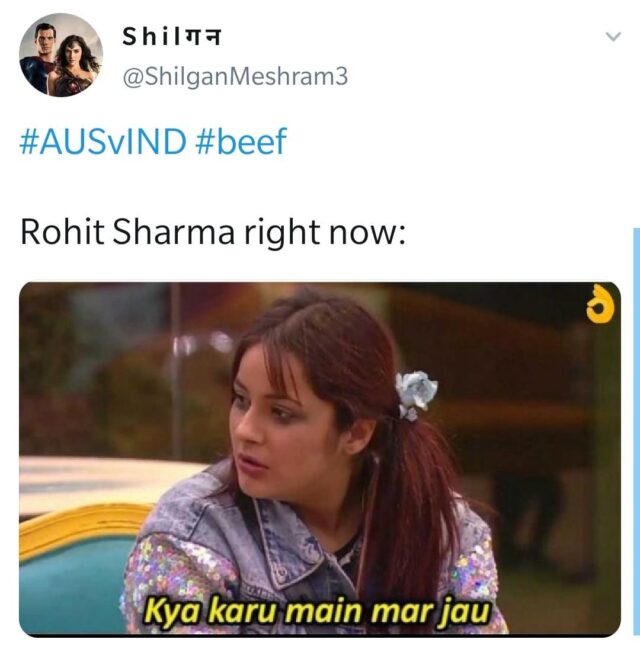 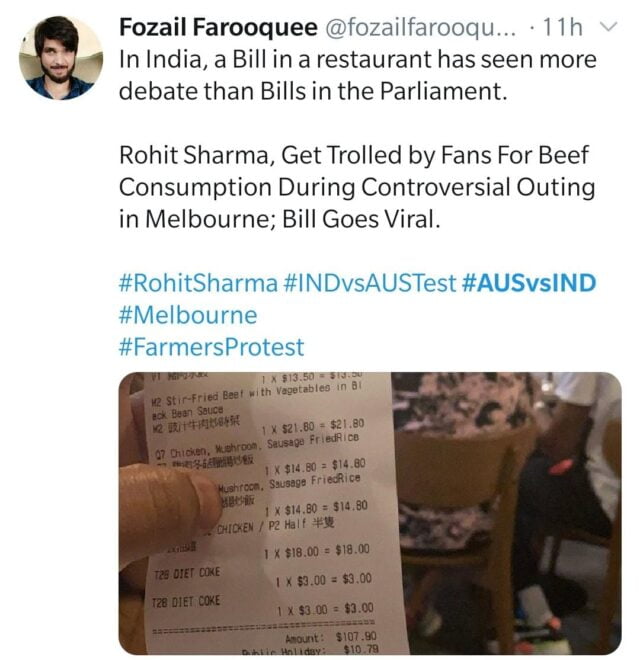 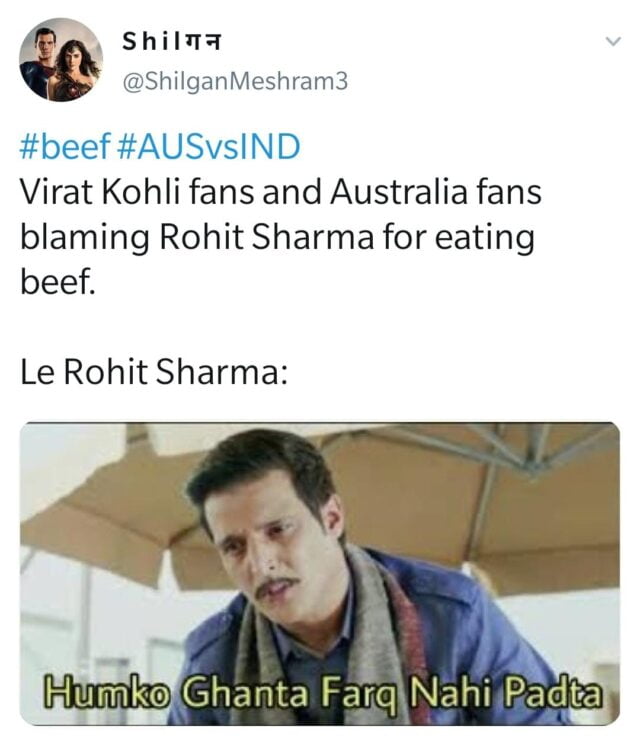 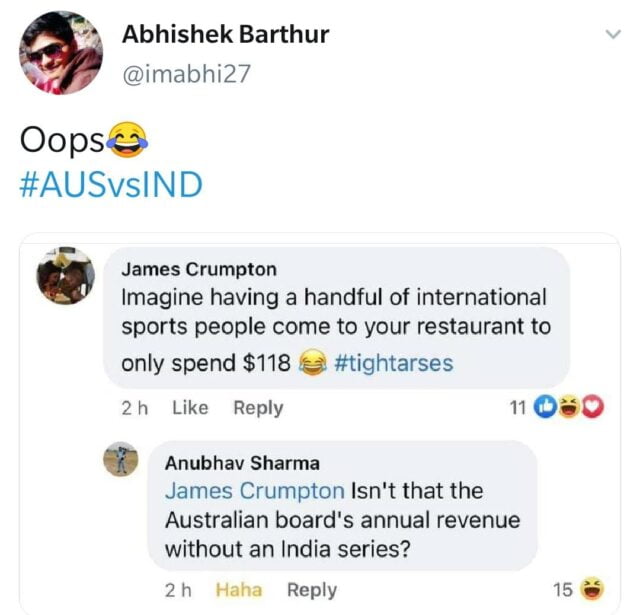 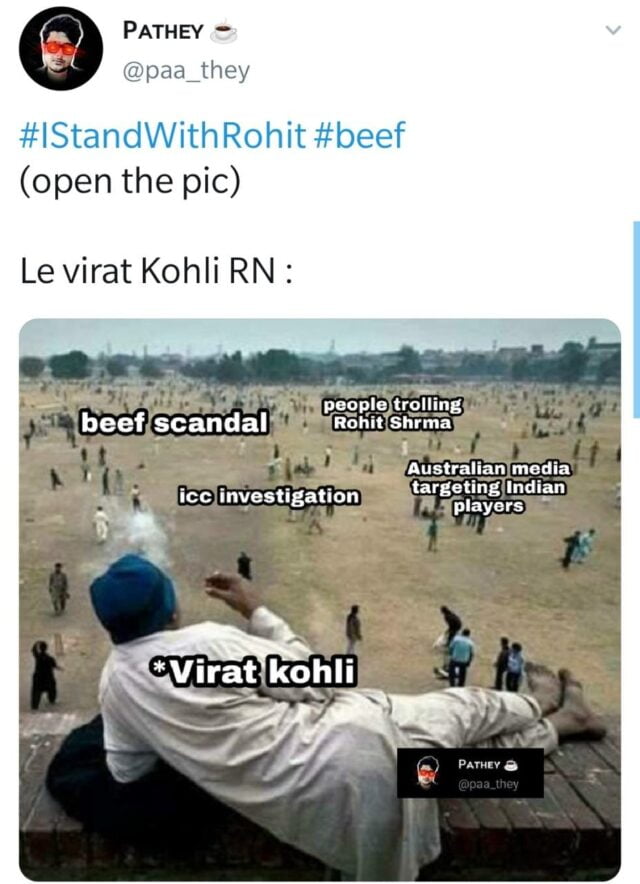 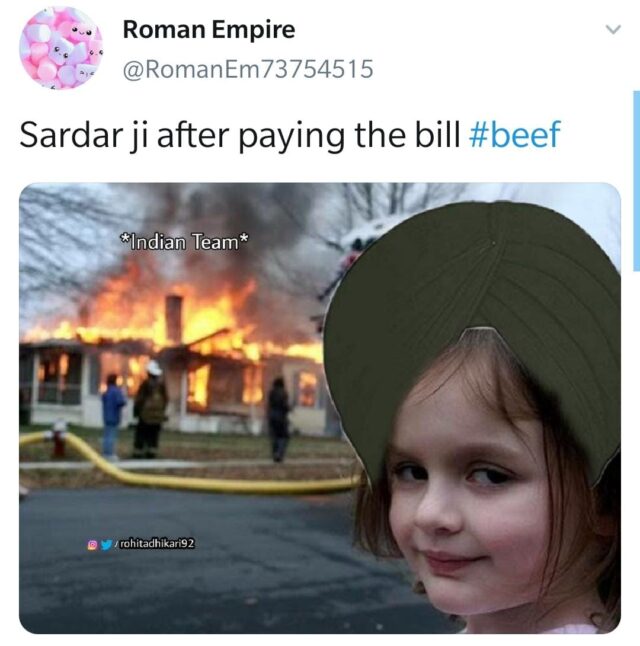 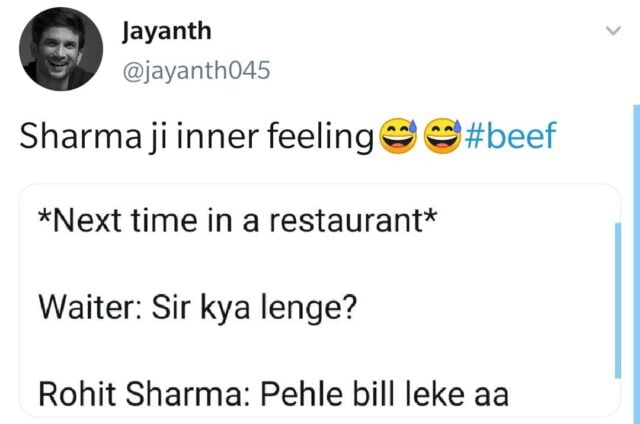 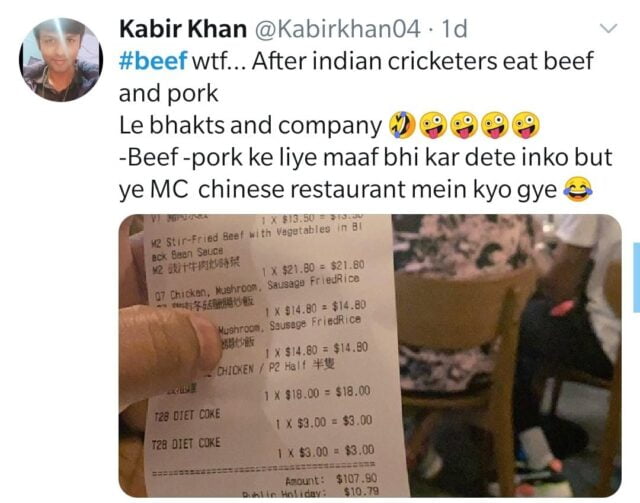 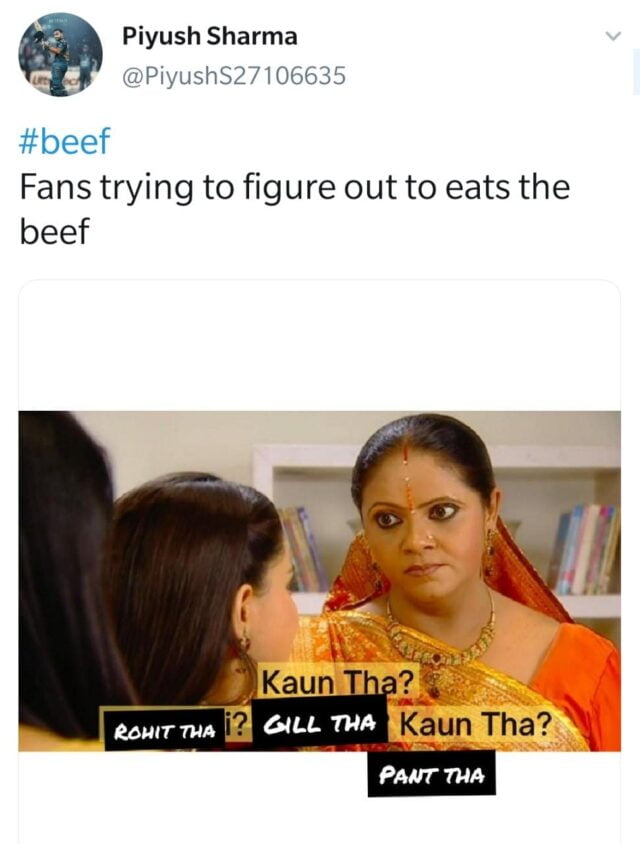 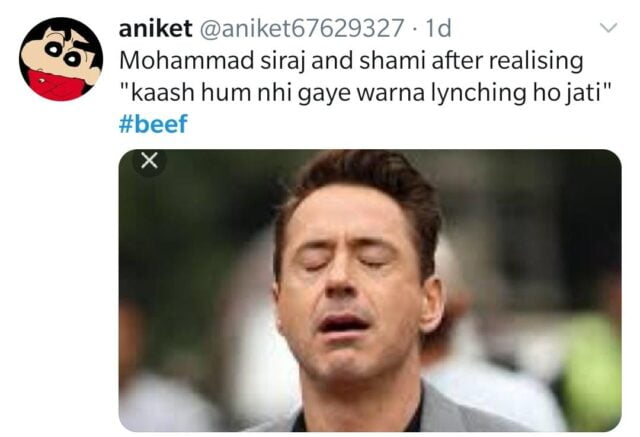 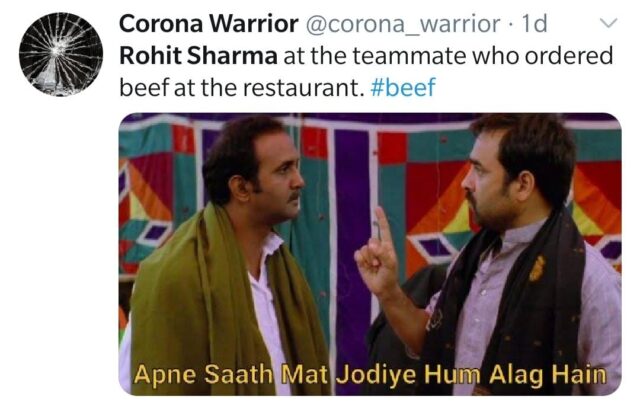 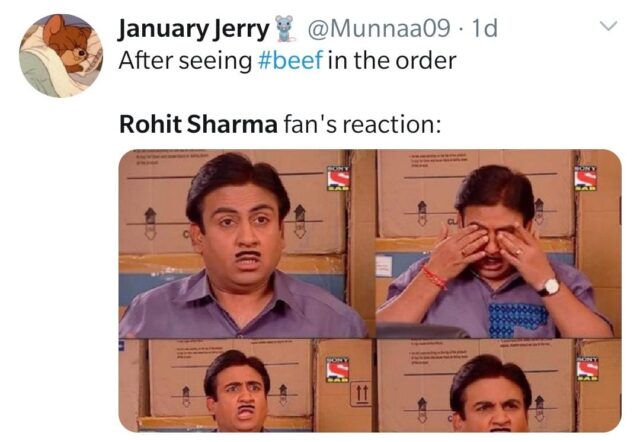 Later, the Indian team and other support staff members were tested negative for COVID-19. The isolated players, Rohit Sharma and co., were also allowed to travel with the team ahead of the third Test in Sydney. 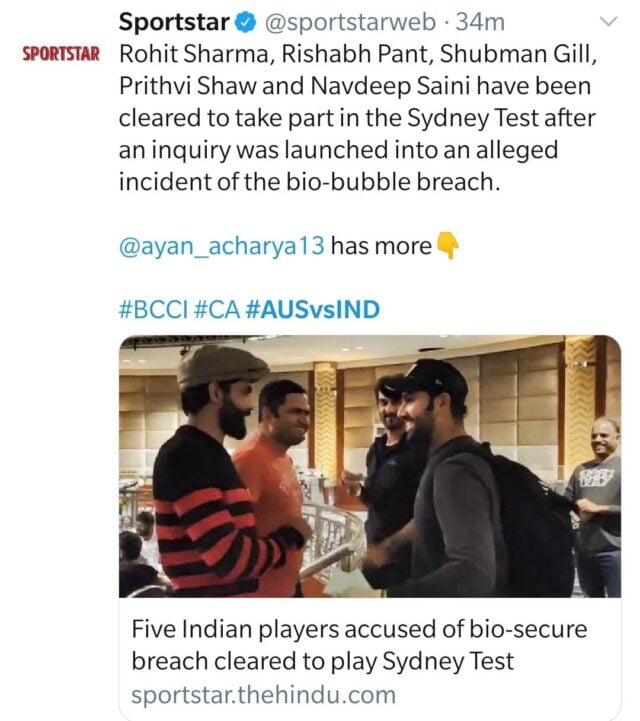 “Playing members of the Indian Cricket Team and support staff underwent an RT-PCR Test for COVID-19 on 3rd January 2021. All tests have returned negative results,” the BCCI said in a statement.

In An Age Of Cow Vigilantism, How Do Beef Eating Malayalis Feel?