‘I ♥ New York’ : Serving exquisite delicacies from the Big Apple since 1977.

One of the most widely distributed and imitated images in the world, the “I Love New York’’ Logo has become so common that other countries have come up with a similar version of the logo for their metro cities.

Well, if we dig in the past we would see that New York City in 1970s was in an extremely bad shape. Crime was at an all-time high, companies were facing bankruptcy and tourism hit an all-time low. To give an impetus to the tourism industry and restore the faith and confidence of the people living in surrounding states, the government came up with a comprehensive 5 year marketing plan under the ambit of ‘I Love New York’ campaign with an objective to sell the most lucrative and attractive sights which the city offered ranging from the Broadway to its picturesque skyscrapers. The above image is Milton Glaser’s original pencil sketch for the now-iconic I ♥ NY logo campaign which was subsequently transformed into the digital template which we see today.

Star studded advertising, a slogan and a television commercial highlighting Broadway theater, the campaign in its initial year itself was a huge success.
When the NYC was devastated after the 9/11 terror attacks, the campaign was modified to instill a sense of pride and belongingness among the New Yorkers and to broadcast the hidden message that no level of terrorist activity can ever deter the love which people shared for the Big Apple. The logo now said ‘I ♥ NY MORE THAN EVER’ with a heart that carried some bruises. You can see the TV commercial on YouTube that was released after 9/11:
https://www.youtube.com/watch?v=bTwBXnDmc5E


From time to time, the campaign has been modified in accordance with the changes in NYC’s economic, political as well as social environment. Presently, the campaign is active on variety of social media platforms ( Facebook, Twitter, Instagram) and even runs a website and a mobile application. Recently, the team of I ♥ NY has initiated some extremely innovative campaigns round the globe to reach out to a wider audience and project the city with the perspective of those living in it. Let’s have a look at a few brilliant ones: 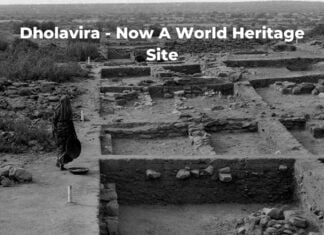 Nandini Mazumder - July 29, 2021
Dholavira, a city in Gujarat has been inscribed as a World Heritage Site by UNESCO.  In the 44th session of the UNESCO Heritage Committee, the...