The greatest musician ever and saviour of our music industry is back with another of her hit tracks that will set fire to everyone and everything in sight.

It will literally make you want to set fire to yourself… in happiness of course and the fact that we mere mortals are truly unworthy to listen to this musical piece of genius.

So *drum roll* because our country’s pride and joy Dhinchak Pooja, is back with her newest track, ‘Naache Jab Kudi Dilli Di’.

First off, all of you and I mean all, have to go and feast your ears on this song. Go on, don’t be afraid:

(If I had to go through that, then I will dang well make sure everyone has to listen to it too)

What Is The Song All About

Starting off only, you can see that the production cost has definitely gone up with the bhangra dancer group beginning the music video.

You can also figure out that Ms. Pooja has finally gotten the funds from somewhere to record in a slightly more professional manner considering the lack of echo that is iconic of her initial songs like Daaru and Selfie Maine Le Li Aaj.

Then there are sweeping shots of Pooja walking in the mall, walking and posing in Delhi’s the Connaught High Street area (where almost every day some photoshoot or another is going on), on a bike and obviously dancing with the bhangra group. 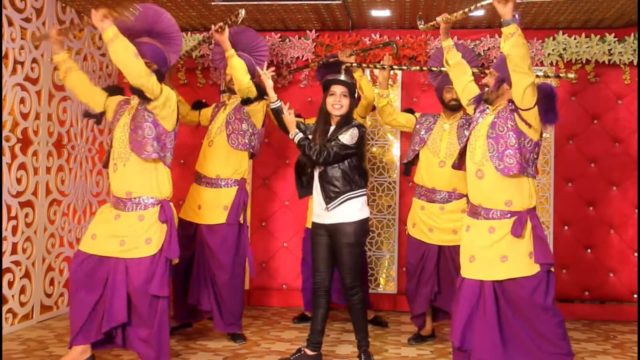 However, the crown jewel of the song would be its lyrics. What lyrics seriously, Gulzar Prasoon Joshi, Javed Akhtar, should just give up because… this is how you write a song.

With barely 3-4 actual lines and then just repeating the line ‘Naache jab kudi Dilli di’ over and over until it is the only thing you can remember.

The song is essentially about a Delhi sorry… Dilli ki kudi and how she can do anything and everything, from going to office to eating paani-puri, flirting and more.

Seriously though, if nothing else it will surely give you 3 minutes of good laugh seeing Pooja awkwardly dance like a 2 year child and give intense expressions that would put James Bond to shame and attempt to ride a bike.

Honestly, the song is just another typical Punjabi song with only autotune for singing, a bike and a big car because you cannot show ‘expensive’ any other way, some background dancers and all.

But even calling it a song would be giving it too much credit, since there is genuinely nothing about this video that can be called one, there is no rhythm, no lyrics, no actual singing talent in the singer herself.

Frankly, I’m just scratching my head at who exactly is funding these videos in the first place, since she has been posting these music videos for some time now and each time it only gets better in the quality of the video and all the flashy things except the actual talent.

More than anything Dhinchak Pooja’s growing popularity just concerns me about the current generation. In the 2 days that the video has been posted, this music video has already acquired about 71,573 views.

The fact that so many people have seen it and is also being shared on WhatsApp groups (someone just forwarded this video’s link on one WhatsApp group I’m in) is disturbing to see and worries me about the fate of our music industry.