Home Finance What Do Indians Have To Say For India Beating UK’s Economy To... 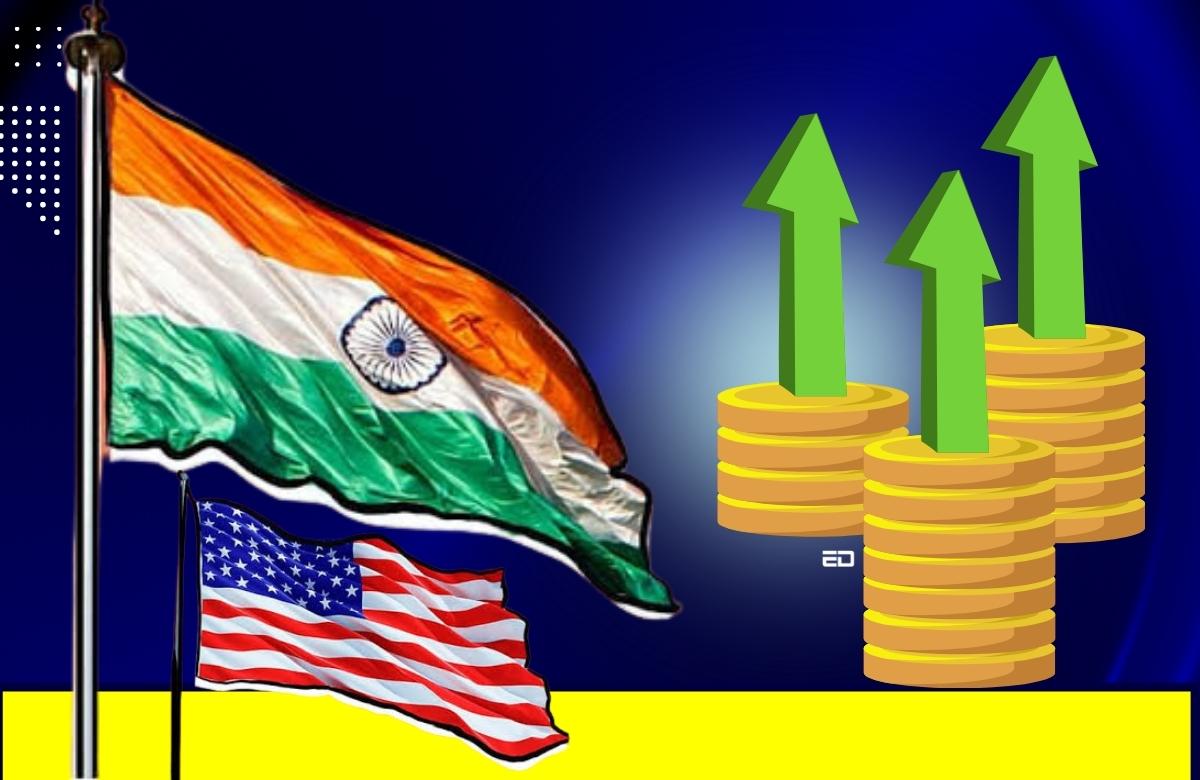 On 2nd September Indians got an interesting surprise when a Bloomberg report stated that India had taken over the United Kingdom (UK) and was now the 5th largest economy in the world. The report was created using the International Monetary Fund (IMF) database and historic exchange rates from the Bloomberg terminal itself.

According to the report, India had actually surpassed the UK in the final three months of 2021 itself and then in the first quarter of the year took over the lead as per IMF’s GDP figures.

As per sources, the Indian economy is expected to grow another 7% this year itself with the report stating “A world-beating rebound in Indian stocks this quarter has just seen their weighting rise to the second spot in the MSCI Emerging Markets Index, trailing only China’s.”

The report used the US dollars as a base for the study and as per an NDTV report “on the last day of the relevant quarter, the size of the Indian economy in “nominal” cash terms in the quarter through March was $854.7 billion. On the same basis, UK was $816 billion.”

However, this historic moment has resulted in a lot of back and forth among not only experts and analysts but regular Indians too. While most are celebrating, there are some who were not that impressed and pointed out where all India is still lacking.

What Did Indians Have To Say? 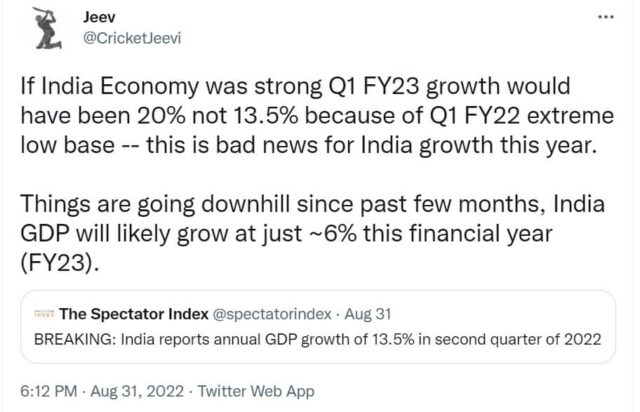 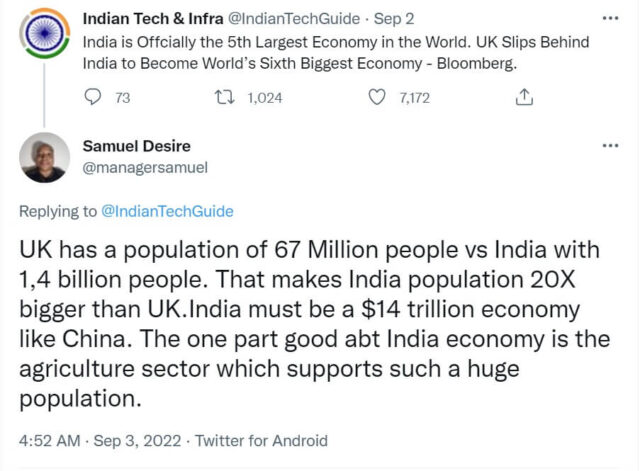 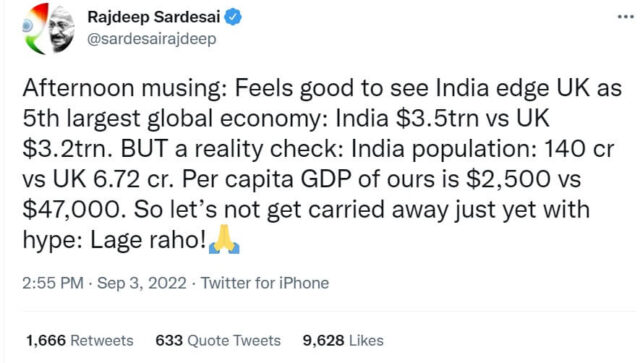 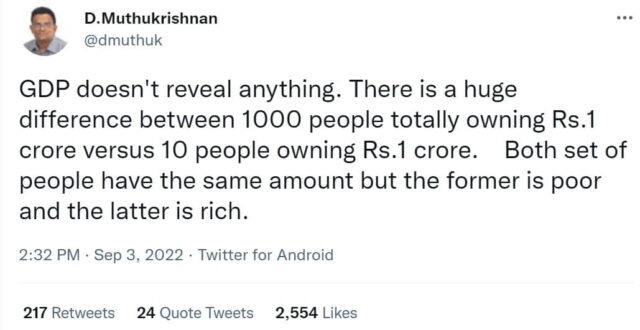 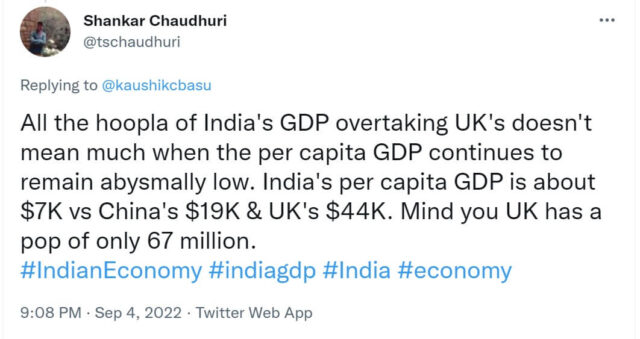 Read More: Which Economy Bounced Back The Fastest From The COVID Aftershock?

What Do Experts Have To Say?

Considering the topic at hand, experts obviously had to put in their two cents on what this means and whether this is good or bad. Here are things analysts said on this rise in rank and what it means going forward.

Charan Singh, economist and chief executive of EGROW stated that “We have exceeded the UK in GDP figures in 2022. By 2027, we will be much higher than them in terms of economic performance. UK’s economy is shrinking, India’s is booming.”

He also spoke to ANI saying that “While the world is on the brink of a recession, India is growing by 7 per cent. There is inflation of 10 per cent in the UK, 9 per cent in the United States of America while in India it 6-7 per cent, which is normal. It is a good news for all Indians before the auspicious occasion of Diwali.”

Meenakashi Lekhi, Minister of State for External Affairs and Culture:

Meenakashi Lekhi, Minister of State for External Affairs and Culture stated that “Before 2014, we were in fragile five economies. It is a huge feat to become the 5th largest economy and surpass an economy like Britain from that position.”

Dr. Arvind Virmani, former chief economic advisor, said that “India is moving up the power scale and by value of forecast we will become 3rd largest by 2028-30.”

He further added that “… the population numbers are accurate so the inference that we have to stretch our GDP over many more people remains true.” Also saying that “While many of us couldn’t resist a post-colonial frisson of pleasure at the news that India’s GDP has overtaken the United Kingdom’s, this forward explains why we shouldn’t get too carried away….still, a pat on our collective backs isn’t undeserved!”

Kaushik Basu former Chief Economic Advisor (CEA) in a tweet said that “This (India overtaking UK) got delayed by 2 years because of the sharp slowdown in India’s per capita income growth since 2016. But I’m glad it’s happened now.”

Basu further said that “we projected India would overtake UK in terms of GDP by 2020, because of India’s faster growth of population and per capita income”. Basu was the CEA from 2009 to 2012 under former Prime Minister Manmohan Singh and also acted as the chief economist of World Bank from 2012 to 2016.

Former RBI governor D Subbarao in an interview said that “The economy clocked growth of 13.5 per cent in the first quarter (April-June) of this fiscal year which would have been cause for celebration in any other circumstance. “In the event, it’s turned out be a cause for disappointment and even concern.”

“Disappointment because there was expectation of a bigger bounce back from the first quarter of last year when economic activity was crippled by the Delta wave.”