Today we take you back to 2014 when a new four-year undergraduate programme was launched in Delhi University by Vice-Chancellor Dinesh Singh.

26th October 2014: In 2014, there were protests when a new four-year undergraduate programme (FYUP) was started by the administrative authorities. The decision to move from a three-year degree to a four-year one was propelled by Vice-Chancellor Dinesh Singh.

The Delhi University was slammed Delhi High Court for creating a mess by persisting with the FYUP and then moving on to the earlier three-year system. The university was also slammed for the mess it created during the admissions due to the rollback of FYUP.

“It clearly is a case where owing to the mess which is the creation of the respondent University itself, in spite of clear signals of change in policy, first persisting with the FYUP and at the last minute relenting,” says the bench. 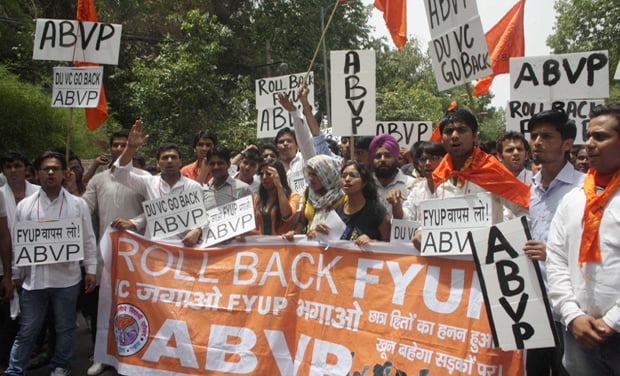 The University Grants Commission (UGC) asked the University to review the implementation of the FYUP after declaring it illegal. It was declared illegal because it violated the National Policy on Education that follows the format of 10+2+3.

The FYUP controversy might have had its disastrous effects on students. It would have made students suffer for another year.

The FYUP course is only beneficial to those students who want to study further in the universities abroad because they follow 10+2+4 curriculum. But not all the students want to go to abroad universities.

ALSO READ: From Votes To Fights: This Is How Student Elections In Delhi University Have Become Violent & Scary

If it was implemented the students would have to bear the financial burden of an extra year. The officials forgot that the students will be forced to spend a massive amount of 10000-12000 rupees per month in food and lodging over and above the college fees while studying in DU.

Since the programme was violating the format of National Curriculum Framework, the students would have faced serious incompatibility improving “equivalence” while joining other courses, institutions, and universities.

“There are too many foundation courses and very few discipline courses in FYUP which is not doing us any good as we are not learning anything new. In four years, I will be studying just 18 discipline courses as compared to 27 in the three-year degree,” says a student from the College of Vocational Studies. 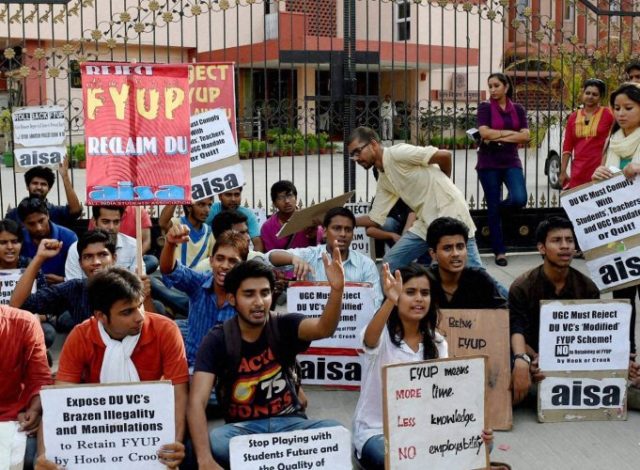 Post-Scriptum: After a month of the change in government, there were various protests by Akhil Bharatiya Vidyarthi Parishad (ABVP). The student organization requested the HRD Ministry to review and revoke the programme.

The controversy received mixed reactions from students. It was noted that after the FYUP controversy St. Stephen’s had halved the number of seats for economics students. This may have affected a lot of students.

DUTA also collected feedback on FYUP from students. As per the feedback received from the students of different colleges, the students believed that the FYUP was failing to make productive use of their time.

“I am not sure if I actually took a right decision by enrolling for Delhi University this year. The entire CBCS seems very complicated to me at the moment,” says Shweta Sharma, a student of Delhi University.

There are other universities and colleges that follow the choice based system like Ashoka University, Shiv Nadar University, Jawaharlal University, and Kerela University. They have been running successfully.

How To Make The Most Of Your Final Year In DU For Life After...

Campus Janhavi Sharma - October 21, 2021
College is a time of many ups and downs, experiences, learning opportunities and self-growth. A lot of interests, goals and passions are discovered and...