With the sad state of the economy, shortage of jobs, demonetisation, GST and other financial issues plaguing the citizens of the country, this Budget was something that many people were awaiting.

Mostly, to see how the ruling government plans to straighten out the problems and what changes they will be bringing to the budget.

However, instead of impressing anyone, it has managed to leave almost the whole of the common population confused as to what it was all about.

A new optional tax regime, under which citizens can either keep the earlier one or opt for the new one (granted they forego the previous tax exemptions) has left the common people scratching their head.

The whole Budget speech has some unforgettable moments though that has been ample fodder for the memesters of the country.

From one of the longest Union Budget speeches, to politicians trying to keep themselves awake, we take a look at some moments from the 2020 Budget speech that we just cannot ignore:

FM Nirmala Sitharaman had already made history by giving one of the longest Union Budget speeches ever.

Clocking at a whopping two hours and thirty minutes, Ms. Sitharaman certainly seemed to be in no hurry to wrap it all up.

However, due to her felling unwell she unfortunately had to pause the speech and was seen being given candy and sugar by colleagues around her.

She stopped just short of two pages from the end of her speech, but it was considered necessary as she was sweating profusely and reportedly her blood pressure fell.

Prior to this Ms. Sitharaman herself had the record of the longest Budget speech ever at two hours, 17 minutes. Even this year, she only stopped to take a breath after two hours and 41 minutes.

It’s been more than 2 hours and the budget is still going on!!! #Budget2020 Even Indian movies are now shorter!

Meanwhile, @nsitharaman is setting a record here. This budget speech is close to clocking two and a half hours, making it the longest budget speech in Independent India's history. #BudgetWithBS #Budget2020

The clip of a politician sitting in the row behind Sitharaman, who looks to be trying to keep awake by blinking quickly, went viral.

This prompted many people to try their own hand at fitting it into different scenarios.

A lot of people also commented on the long length of the Budget speech and how nothing important was being said for the benefit of the country and its citizens.

Read More: Using Plastic As Currency Is The Big New Idea In The Economic Development Sector

Another clip that seems a bit more R rated also was being shared around where people took an action being done by a politician to be in a more vulgar way.

Many people also commented on how the government was selling off so many of its owned properties like Air India, LIC and more.

Ms. Sitharaman announced during her Budget speech that the Indian government would be earning as much as Rs. 1,05,000 crore after selling their equity stake in PSU companies. 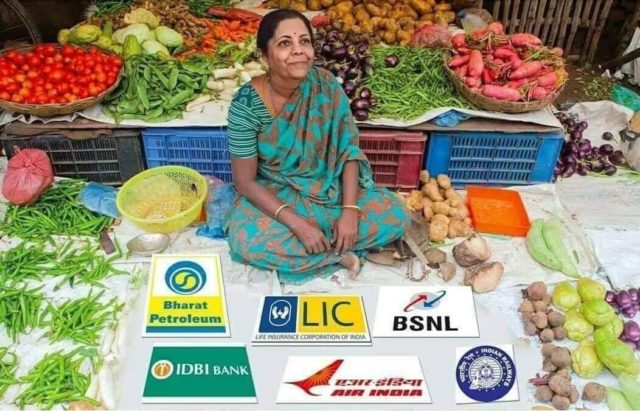 One thing is for certain that no one, not the economic experts nor the Indian common people are all that happy with the recent Budget.