Home Social Opinions This Pic Of Boy Crying Next To The Dead Body Of His... 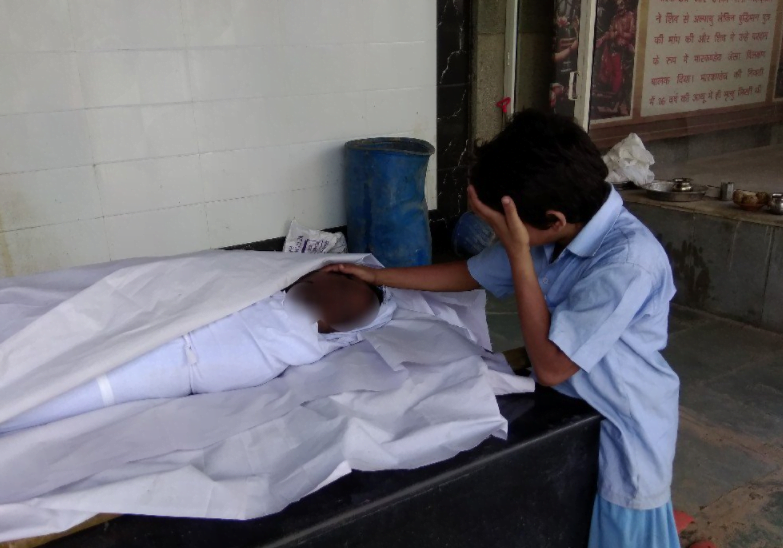 The shackles of the caste system have reduced members of the Valmiki community to take up manual scavenging which involves cleaning dirty sewers and septic tanks with gurgling excreta and poisonous gases rendering the workers unconscious.

Although manual scavenging was outlawed in 2013, the ban was rechecked comprising of
rehabilitation measures for people still engaged in the caste-based profession. Sadly, with the death of the manual scavengers on the rise, the government’s clear apathy hinging on the caste system still rings a bell.

As per the first official government statistics on deaths owing to manual scavenging, at least one death has been recorded every five days since 2017.

Recently, a photo of a boy crying next to the body of his dead father prompted social media users to donate around $70,000 to the family of the deceased.

In Delhi, eleven sewer workers died in a month without protective safety gear.

With the activists and members of the National Commission for Safai Karamcharis claiming many Indian authorities to undercount the number of deaths in their respective Indian states, the death rates in country’s deadliest profession has escalated to five deaths in a week in the capital when the workers were forced into cleaning a sewage tank.

Anil, a sewer, was lowered in a 20-foot sewer belonging to a Delhi Jal Board (DJB), succumbed to death after a weak rope tied to his waist snapped midway.

Anil was hired by Satbir, a contractor for the sewers, who ignored warnings pertaining to the laborer’s safety which is considered illegal as per the law, thus providing a weak rope and getting the work done in the evening around 7:30 pm which is unsafe.

A spokesman of DJB reported that the incident took place while Satbir was trying to illegally connect the rope to his three-story building.

Atal Singh, another sewer had to hear from a group of boys in his neighborhood about his son, Rahul, falling into a 30-feet deep sewage treatment plant in Faridabad.

Rahul had been hired as a sewer like his father and had slipped while clinging on
metal scaffolding as he was cleaning a blockage. On seeing his son’s head bobbing in the dirty pit, Singh jumped in to save his son but unfortunately he too choked on the poisonous gases from the sewer.

Looking at the father and son struggling for life, their younger son while asking for support from the crowd that gathered jumped in as well. All the three men sank in the dark garbage and their bodies had to be fished out using cranes.

You Can Also Read: From A Dabbawala To A Data-Scientist: The Inspiring Story Of Ankush Bhandari

Deepak, a sewer worker talks about his experiences while entering a sewer. He speaks about drinking liquor to take his mind off the overpowering stench and the excreta laced with flies hovering around the pile.

This is what Deepak has been doing at 43, risking his life to clean drains and sewers while government contracts cleaning to individuals, who hire sewers paying them measly sum without acknowledging the need for protective gear.

While the bodies sunk are fished out, hooks are sunk into the bodies which scoop out chunks of flesh while the members of the deceased are left to watch such horrifying
a scene that ensues thereafter.

What has the Government done to stop such merciless killings?

As per a Times of India report, the Delhi Government said that contractors will be booked for culpable homicide in case of the death of sewers facing charges under IPC Section 304 pertaining to culpable homicide not amounting to murder contrary to Section 304A which stated death due to negligence.

But washing hands off by pinning the blame on contractors while the PM boasts of Swacch Bharat being a central affair asking the State to address the problems of manual scavengers speaks of the blatant hypocrisy.

The wives and the children of the deceased are crippled in this caste affair as they cannot seek jobs or compensation when their husbands were hired by contractors, not the Government.

All I am saying is that the problem cannot be fixed by charging the contractors but there is a dire need for mechanization in the sanitation department as well.

Even if the Government is putting their time and money for bullet trains and the Rafael deal, where is the money for buying technology when it comes to regularly saving the lives of sewer’s workers?

Do we not owe a major implementation of the Swacch Bharat campaign to such
lives which actually matter?

Sources: The Hindustan Times, HuffPost India, The Quint, The Wire

From Votes To Fights: This Is How Student Elections In Delhi University Have Become Violent & Scary