Home Lifestyle This Fire In Kolkata’s Bagri Market Has Been Going On For Almost... 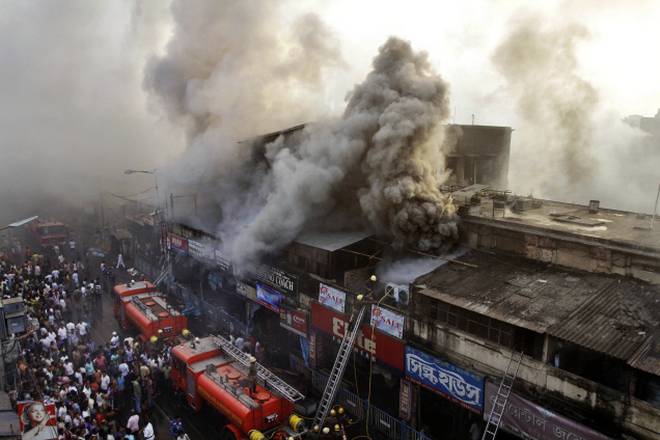 The Bagri Market fire in Kolkata that has been raging since Sunday morning, is still going on with no sign of getting subdued even after a long 36 hours.

The central area of Kolkata where the market is located has been filled with about 60 firefighters who have been trying to put out the fire ever since it started in the Canning Street. Although a good news that emerged was the fact that no one was injured as the fire broke out late at night and no civilians or employees were present at that time.

As reported by ANI, about 30 fire tenders were present in the area which is also one of the biggest trading hubs of Kolkata, along with the civil defence unit and the disaster management group of Kolkata Police all trying to douse the flames. 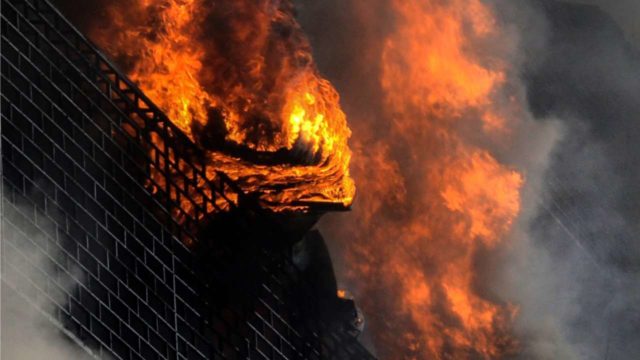 How The Fire Started?

On Sunday around 2.45 am a major fire broke out in the Bagri market of Kolkata, and apparently, the fire was so huge that clouds of black smoke surrounded the entire area.

Sovan Chatterjee, the Mayor of Kolkata, commented on the tragedy, “The fire broke out at 2.45 am. We are trying our best, but firefighting operation is tough here because of the number of buildings. No injuries have been reported.”

The market has more than 1000 shops, and these along with a whole six-storeyed building in the Burabazar area of the market have been completely destroyed by the fire.

The fire was still going on even till Monday morning and the whole area was filled with flames and smoke with the shop owners on their part trying to save their goods and products.

As per sources, it was said that, “The fire started at ground floor of the five-storied building and spread rapidly due to huge stock of inflammable articles.”

The reason why it was difficult to control the fire was given in part by a fire department official to ANI who said that, “We’ve reached from ground to top floor and have succeeded in containing fire but due to presence of chemical there, it’s difficult to contain pockets of fire inside. Now 35 fire tenders and 250 firemen are here and operation is going on continuously.”

The presence of inflammable products like cosmetics, chemicals, plastic packaging items, deodorants and more only worked to aggravate the fire and make it worse.

To control the fire, firefighters said that they are using grilles to access the floors from outside and also gas cutters to cut the shutters aways. As per PTI, a senior official was quoted as saying that, “As the area is very congested, we are finding it difficult to work. We are using hydraulic ladder and gas cutters to cut through the grills of the gates and small windows to enter the building.”

Along with these measures, they also sprayed water on the nearby buildings in order to ensure that the fire does not spread to other neighbouring areas. 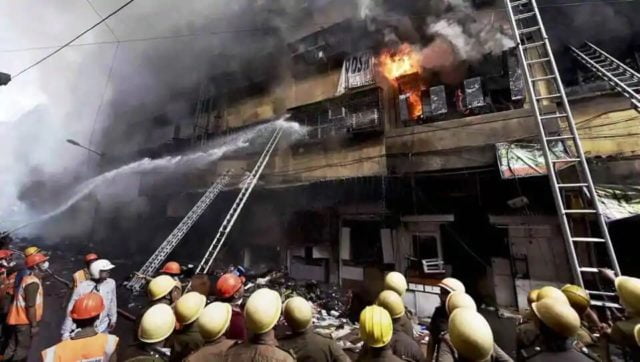 Read More: Malviya Nagar Fire’s Rubber Fumes Could Be Seen From A Distance Of 5 Kms

Jag Mohan, the Director of fire and emergency services in a report by HT stated that, “The firefighting arrangement in the building was insufficient. They did not take steps despite repeated warnings.”

Apparently, as per estimates the loss incurred from this fire can be as big as almost Rs. 80 crore since the traders were getting their stocks ready for the upcoming festival season.

According to reports, the traders and shop owners have till yet not really been able to enter the premises but various businessmen have said that the stocks in the market was worth crores.

Congested and narrow lanes that delayed the firefighters reach the place in time, shortage of water and a thick network of overhead wires further created obstacles that allowed the fire to spread further than it should have.

As per reports, an important time window was missed due to no supply of water that lead to the fire getting more out of control.

TOI reported that traders have said that the estimated price of the stocks could be anywhere between Rs 1,000 to 1200 crores especially before the festival season.

As per Chatterjee, the market authorities did not follow proper protocol for fire safety measures and said that, “I visited the building on several occasions and held meetings with market authorities, asking them to take steps to ensure the safety of the building. Last month, too, a meeting was held in this regard. A water tank on top of the market did not have proper pipelines to take care of eventualities.”

Reports state that while the building was given a clearance just 2 months ago by the state fire services department, however, it was only conditional and required that the building make appropriate arrangements with proper fire safety equipment.

An official stated that, “It seems no steps were taken after the conditional clearance certificate was issued.”

While Chatterjee has not really stated why exactly a building that was lacking proper fire service measures was even given conditional clearance in the first place, he has said that, “We have sent notices, held meetings with traders and businessmen pleading with them to install adequate firefighting systems in buildings, including the Bagree market. Had they listened to us, this would have been avoided.”