More often than not, all of us get fascinated by the world of ‘celebrityhood’, ‘stardom’ and ‘fame’. But things are not as rosy as they seem in ‘reel’ life. Stories take different turns when it comes to ‘real’ life experiences.

Such is the story of Kaun Banega Crorepati’s Season 5 winner, Mr. Sushil Kumar. Recently, Sushil Kumar (Mantu Kumar Sushil) took to Facebook to narrate the incidents that unfolded in his life after he won Rs. 5 crores on the set of KBC in 2011.

After his grand win, Sushil Kumar remained a popular ‘local celebrity’ for years. In his Facebook post, he revealed that he used to attend various programmes in Bihar for 10-15 days in a month. Consequently, he was drifting away from his studies.

He mentioned that during this period, he could not decide what to pursue further. Back then, he used to take the media very seriously and he did not want to come across as jobless. So, in his interviews, he used to discuss some or the other business ventures that he was involved in but all of them used to collapse in a matter of a few days. 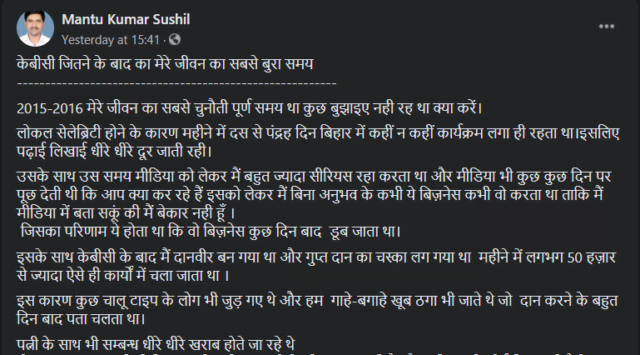 All of these incidents contributed to the deterioration of his relationship with his wife. More often than not, they got into arguments because his wife believed that he was not concerned for the future and could not differentiate between right and wrong.

Down the lane when everything was going wrong, a few good things also happened to him. With the help of a friend, he started a business of running cars in Delhi so he used to visit the capital frequently.

He found their company very fascinating because their content was new to him. He used to feel less about himself because he realized that he did not know much about various topics and subjects.

But another negative aspect came his way. He got addicted to smoking and drinking in the company of his new friends. They used to spend time watching a lot of films and eventually, he started taking media very lightly.

Read Also: Why Do Celebrity Deaths Make Us Grieve So Much?

One night while he was watching a movie, he got into an argument with his wife. Things were already not very pleasant between them so he got a little upset over all this and went for a stroll, anguished.

After a while, a journalist from an English newspaper got in touch with him and something during their conversation irritated Mr Sunil so he told the journalist that he had exhausted all of his money and is maintaining his livelihood by selling the milk of the two cows that he had.

The news of his bankruptcy spread like a wildfire and soon his acquaintances cornered him. He stopped getting any invites for events and programmes and that’s when he got some time to think about his future.

Back then, he used to be a big fan of cinema and wanted to become a film director. Meanwhile, his wife had left his place and was seeking a divorce. In order to save his relationship, he wanted to make a fresh identity as a director.

Consequently, he spoke to a producer friend who suggested him to work in the television industry for a few days to learn the technicalities of production. He followed his friend’s advice but soon became restless about working in a production house.

He then quit his job at the production house and began to stay with a friend. At his place, he whiled away the time reading books, watching movies and so on. This continued for about six months and all this while, he got into the habit of smoking a full pack of cigarettes in a day.

But it seems like things ended on a sweet note for him. He got some time to look at himself objectively and consequently realized a lot of things.

In his Facebook post, he mentioned some important pointers that he realized all this while. He understood that he was running away from the truth and real happiness lies in the work of one’s choice. He added that happiness lies in little things and one must always strive to help the needy.

In the meantime, he wrote three scripts for the production house for which he received merely Rs. 20,000. After all this, he went back to Bihar and started preparing to become a teacher. Soon, he got through this.

Along the side, he also got involved in various environmental awareness projects and found a sense of peace in doing so. He also quit smoking last year and has been sober since 2016.

Now he commits to spreading awareness about environmental issues and strives to earn money that is just enough for his survival.

All in all, his inspiring story has shed a light on a lot of life lessons that we all must learn. Some time in solitude is very important for objective thinking about oneself. One must always plan for one’s future, irrespective of the circumstances.