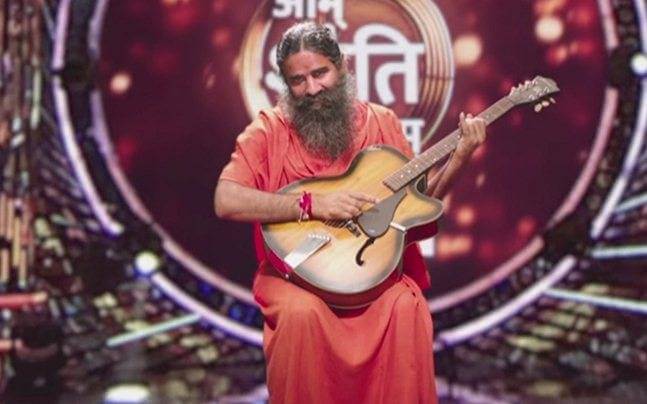 The popular culture in a country plays an important role in setting the tone or establishing a certain discourse in the country in those times.

Hitler used popular culture to establish a negative attitude against Jews. The messages were constantly repeated so people take notice of them and it registers in their psyche. This paved the way for desensitizing the German population to such an extent that they become numb even when they saw people being killed in front of their eyes.

This is the whole idea of a propaganda. That is how it works.

For some reason, this was the first thing that came to my mind when I heard about the launch of the new bhajan reality show.

Yes! Baba Ramdev is coming with his new reality show called “Om Shanti Om” which is a bhajan reality show. This guy never fails to amaze me with his new ventures. Be it his idea about Patanjali jeans or Patanjali noodles (that taste like shit btw!)

I sometimes wonder the reason for such a humongous popularity of Patanjali within a short span of time. A comedian, Kunal Kamra rightly pointed out, “People in India think Patanjali products are Prasad.” He added that if a man is wearing orange (saffron), people automatically believe them to be legitimate.

Now Baba Ji came up with a new idea about this reality show. Baba never fails to surprise me. The moment I think it can’t get any better, it does!

Not that I am against the idea of such a reality show but I am just looking at the elements of this show.

Firstly, this show will be aired on a new channel named Star Bharat, which is a revamped version of Life OK. Notice how it has been named ‘Star Bharat’.

In times when this country is in a dilemma about its secular identity and the idea of ‘Bharat, not India’ doing the rounds, this channel has been named very smartly. A perfect example of make hay while the sun shines.

Oh, by the way, this channel was launched on 15th August, just in case the hints were not enough.

Secondly, Baba Ramdev, who wishes to ‘Indianise’ the products we use through Patanjali, is seen holding a guitar which is not an Indian instrument.

Although I am sure there are people who will counter this by saying that it is, but as far as my knowledge is concerned, the first guitar was invented somewhere in Spain.

Thirdly, it is a bhajan-reality show.

Though I am glad that people will get a chance to listen to some good bhajans in this day and age where almost everything is either Honey Singh-ised or Baadshah-ised. I wish that the bhajans remain true to their essence and are not manipulated to become any of these two.

But my concern is a little different. Until the national anthem was shoved down our throats in film theatres, I loved every bit of it. Now, even though I love the national anthem and still feel goosebumps when I sing it, but when I am in a movie hall, it does not feel the same.

I do not wish that to happen with the bhajans as well.

Fourthly, Baba Ramdev has suddenly emerged as the undeniable ‘Indian’ icon for some reason.

Listen to his ideas on homosexuality and you will know that this is exactly what we do not need in the future.

This seems more like a desperate image-building stunt to build the Patanjali empire further more than anything else.

Lastly, I understand the point of having Shekhar Ravijani and Kanika Kapoor as judges on the show. But why is Sonakshi Sinha even considered as a judge for singing reality shows?

She seems like a wasted talent nowadays. And not because of anyone else but herself. Refusing to use your talent for even a pinch of good, over and over again is some sort of sorcery that I don’t seem to understand. I still have not mustered the courage to watch the first episode which came out on 28th August on hotstar. If you have, please let me know how you feel.