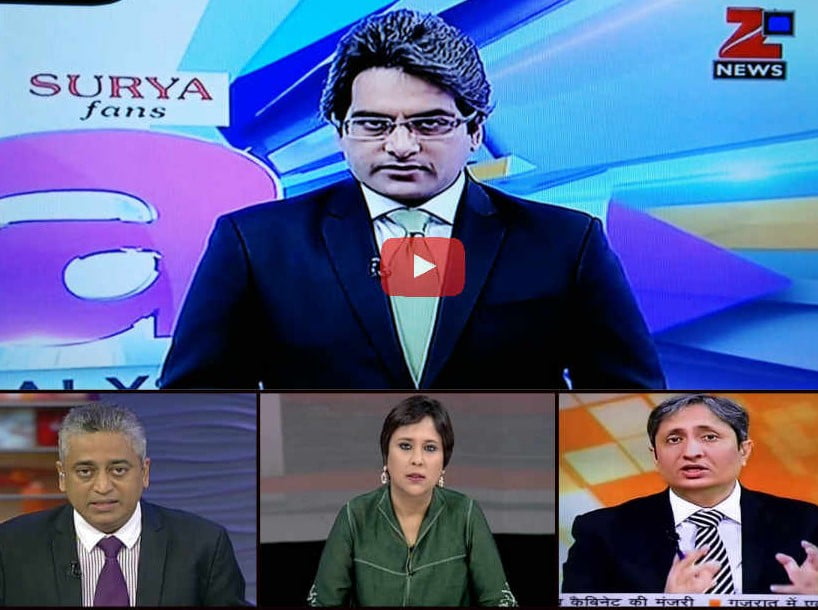 I switch to news channels by accident, and my mood is quite easily destroyed. All I hear are screams from news anchors using the buzz words like patriotism, nationalism, Pakistan etc, and all the visuals I see are replete with communal symbols, the colour saffron and of course, random Patanjali advertisements.

These elements personify the condition our country is being pushed towards right now.

There is a reason I said “pushed towards” and not the position that we are already in. Because once you switch away from these channels, keep away from your phones and interact with some real people out there, you see some normalcy. It is not all bad.

What I am trying to say is, that hysteria exists but the reality is not all bad.

The way we consume our news today has heightened our senses and conditioned them to react to slightest of religious references and symbols, whatsoever they may be and regardless of their context.

The clever use of vocabulary that wraps every piece of news (if I can call it that anymore) can turn anything into a question of patriotism and nationalism. Moreover, the ignorant and hyperbolic definitions that have been ascribed to these words immediately demand a high blood-pressure response from us.

If you try to calculate the square feet area of our country covered by news channels, with respect to the information they deem newsworthy, it won’t take you much time.

What I have observed is, the telecast is largely restricted to Yogi Adityanath’s communal abode, i.e. Uttar Pradesh; and states that have elections coming up, for instance, Gujarat and how crucial they are to the Government’s position in the 2019 elections.

TOXICITY IN YOUR DRAWING ROOMS!

I turn towards the TV and my first emotion is anger. Anger towards unethical journalism, towards the ignorance and towards toxic ideas of nationalism or rather jingoism being shoved down people’s throats.

Then, I turn towards the people I interact with, like my friends, family, and even people I speak to in the virtual world, point out the fallacies in the argument of the anchor with such nuance and rationale, that I forget the toxicity that tested my patience.

I might not agree with everything the people around me have to say about that piece of news, but I was happy to see people dissecting it and not accepting the hyperbole ignorantly.

Well, this was one day that I wasn’t working much, so I had the time to switch to news channels (for fun which never turns out fun by the way).

I’m sure you too might have felt anger, frustration, and irritation or maybe even violent urges sometimes while watching news channels.

And you know what? Their mission is accomplished.

When your reactions or your behaviour rides on intense emotions rather than rationale, your logical responses shut themselves down and your reaction is based on impulse. This makes it easier for them to serve you any goddamn shit which can be passed off as news because, in your fit of rage, you do not care to analyse the fallacies in their presentation. Therefore the solution I have found for myself is that STOP WATCHING MAINSTREAM NEWS CHANNELS. It restores your faith in the world that exists around you and not behind the TV screens.

BJP Might Be Subtly Replacing Modi With Yogi Adityanath