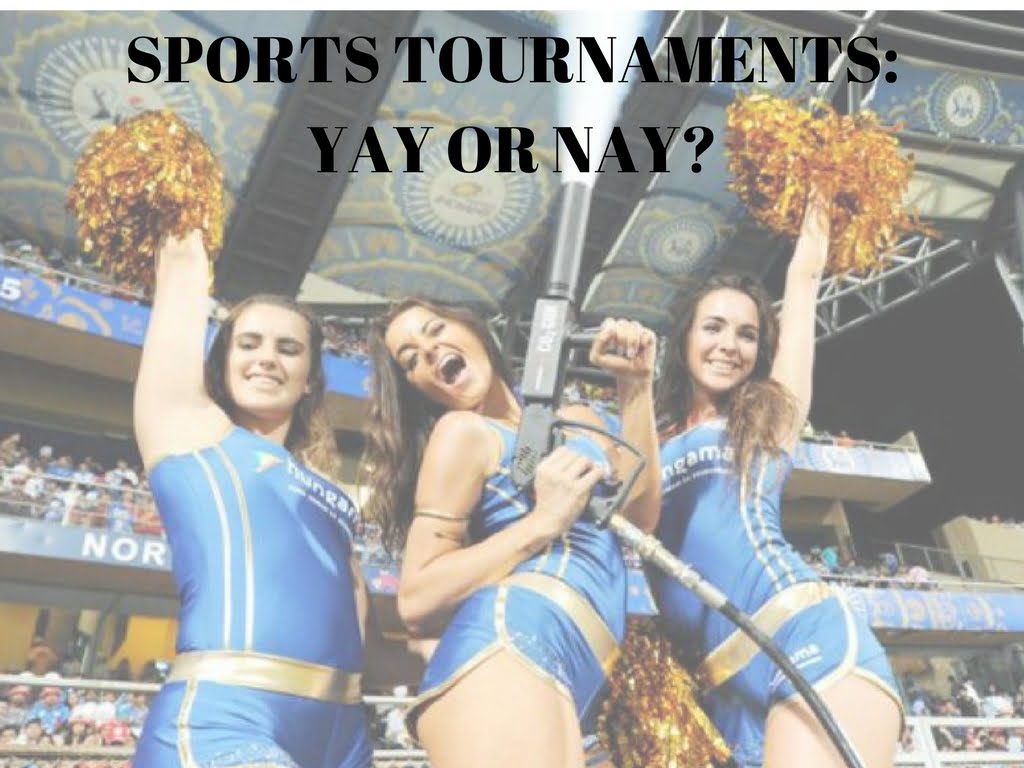 If you begin reading a newspaper from the last page, this article is totally for you. And if you don’t then this one would help you decide whether you should!

Here, read on while our bloggers fight it out over whether sports tournaments are useless.

“Large sums of money go into sports tournaments! Is it even worth it?”

Something becomes beneficial only when it is for everyone. For example, in the end of our semesters all of us have to sit through exams.  It is not that some of us are exempted from it and we sit and watch others giving it.

Physical fitness is important, but the boundaries our society has created separate us into spectators and ‘players’. The importance of sports in our life has come down to only watching them, while they themselves remain useless.

I’ll tell you why sports tournaments especially some are completely useless. Firstly, they do not attempt to recognise talent, real talent might be out on the streets where no one is gambling for them or rooting for them or shouting their names just because… i don’t know why.

Now, let me make a particular reference, so I love cricket but I hate IPL (and before any hate comments start pouring in..), reason being, I see no point tons of money being wasted on actually nothing.

While we prepare the home talent for international standards we also give away our game plans and techniques. IPL is literally about gambling, ‘firangi’ spending shit loads of their time in India, and Bollywood dance numbers with celebrities and rich people throwing parties and rich people wasting money.

Also, the resources of the country drain out massively because of holding so many matches. Last year while Maharashtra suffered from drought and could not provide water for maintaining the pitches, the Bombay HC pulled up the Maharashtra government and directed them to provide “as much water as they need” to the Indian cricket board.

In fact, after the government provides funds for sports, it never gets used to enhance any level of sports and is never utilised in the right place but used in insignificant PRs.

These sports tournaments are happening at a rate modern math might not even be able to calculate. The question is do we even need so many? At the end of the day it is not fulfilling one’s desires but a mere hunt for glory, fame, and success. Sure, money matters, no one wants to work a great deal and add no value to their bank accounts but mostly it boils down to having an innate sense of catapulting towards something palpable that entices most of all.

Not forgetting the media attention it gathers, where the media one day makes them gods and the very next day bring them down like lambs to the slaughter.

And what do these tournaments teach us?

Also, read: Metro Vs Cars: Which Transportation To Take? Our Bloggers Fight It Out

Sports tournaments started in the first place to propagate harmony and interaction between different races, classes, even regions! That’s what they continue to do.

With coming of several Pro Leagues in different sports, we have only strengthened diplomatic relations by teaming up with the likes.

Moreover, just like the Fashion, Bollywood or any other industry, Sports industry provide employment to thousands of people. As much as I’d like to hate IPL, year after year it has provided with fresh talent in the cricket scene.

Sure, there’s show of money and gambling and betting and what not? But would you deny having some of the best players in the current cricket team only after they got a chance to portray their talent in the IPL format?

Talking of real talent can be out on the streets, the same argument can be extended to any given industry then? You think Aishwarya Rai Bachhan is beautiful? My cat has better blue eyes!

Pro leagues, IPL, club formats sure gives out each others’ strategies but then what’s the point of a sports tournament and being a sports person if you can’t constantly learn from others and improve?

Say, I score a 100 in a particular subject and give out my strategy of studying to my classmates, does it necessarily mean they’ll be able to apply all my tricks and be a 100% good at them?

Think about it, not all the countries have a Sachin Tendulkar!

You know what these sports tournaments definitely teach?

The art of being a sport!