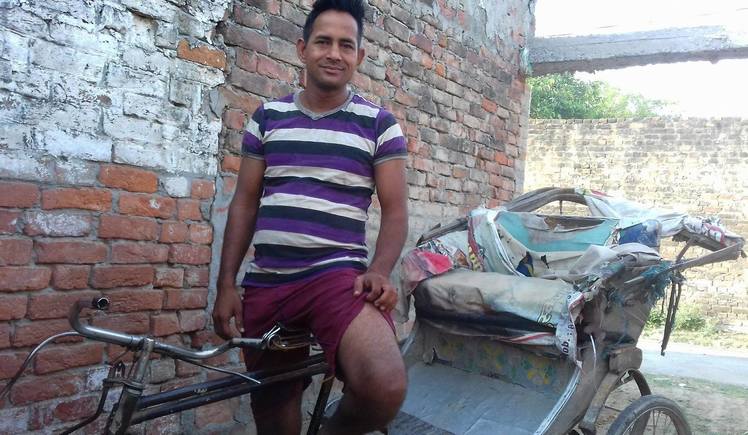 I believe that by now we know not to take someone at face value considering how people from unassuming backgrounds can also surprise us with amazing accomplishments.

A similar story to that would be that of Rajeev, a seemingly common rickshaw puller in one of the oldest city of the world, Varanasi, has dreams and ambitions to help out climate change solutions by studying to become an electrical engineer.

It was pure coincidence that Kaine Johnson, a Community Organiser at The Wilderness Society Australia, who was in India during that time, happened to take this very rickshaw by Rajeev. Now if you must know, Johnson has actually been working in this field for almost 5 years now and has strived towards social improvement by bringing his education and experience to help others.

Kaine got to talking with Rajeev over a wide range of topics during the 4-hour return trip going from technology, philosophy, international politics, literature and finally coming onto the topic of climate change.

Johnson also got to know that Rajeev has a basic education, is fluent in English is very ambitious about what he wants to do in order to make this world just a tab bit better than it is.

All this while Rajeev was driving Johnson on his cycle rickshaw for a small $5 AUD or Rs. 250+.

Read More: Scorched Village Gets A Canal Thanks To Crowd Sourcing

What struck Johnson more than anything was the passion and interest that Rajeev showed in these subjects and how whenever a topic was particularly his favourite, Rajeev would turn his head back to look at Johnson even while driving.

But Rajeev even with all his dreams, hard work and valid education Rajeev still has to live a difficult and obstacle filled life where he has to work tirelessly just to keep a roof over his head and food on his plate.

When Johnson asked him why even with his qualifications, which includes a certificate in Electrical Engineering, Rajeev was still pulling a rickshaw. To this Rajeev replied that it was because he had no other choice,  as he had to make money some way in order to continue his studies and eventually get his preferred job and rickshaw pulling is the only course he had to make that money.

Rajeev though, for his part showed optimism even in this situation by declaring that though his dream might be a bit ways off, he was still proud of having come forward from the bad conditions of his childhood.

When Johnson asked him what his area he wanted to go in, Rajeev said that he wants to work towards fighting climate change by working in the energy sector and afterward teach others on how to implement those ways.

Rajeev for his part is optimistic that his future won’t always be dire and just like the character in My Struggle for an Education, a book by Broker T Washington, he too will eventually reach his goals.

In light of this, Johnson in association with Ketto, a crowd funding organisation, has even started a crowdfunding initiative to help Rajeev get the necessary cash that he requires and start his journey to further his education sooner than later.