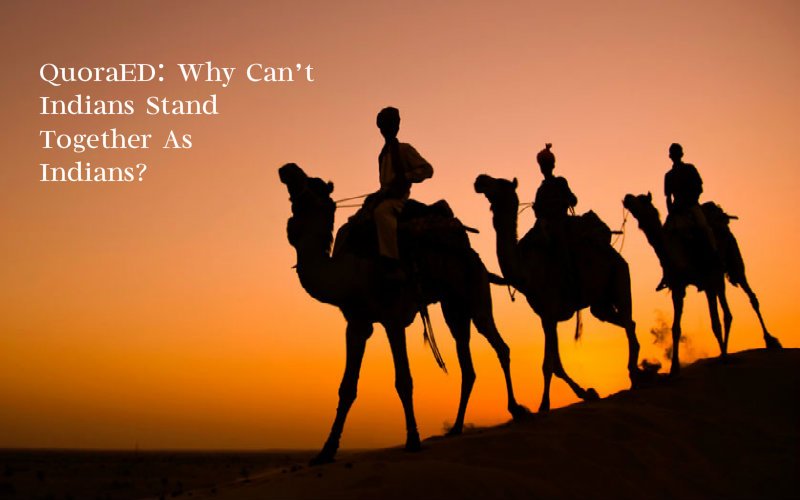 This is the most intelligent, the most relevant question of our times.

We should definitely not shy away from the fact that Indians differ on so many grounds that it is difficult to find a point of intersections between different communities – for example, there might be no point of commonality between a Marwari or a Naga, yet they come under the common umbrella of India.

Seeing these differences, one really wonders – what makes this nation fall apart?

Here is my analysis of it:

We have a set of extremist nationalistic Hindu groups which are very intent on blending everything under the name of Hinduism. This endangers religious minorities in the country. As a result of which, religious minorities hold more strongly to their identity – even if it is in the form of extremism because they have to safeguard themselves.

When Hindu extremist groups say that Hindu = Indian, obviously the minorities in the country are going to resist the tag of an Indian, and would rather associate themselves with their religion because the idea of a nation has been condensed into only one religious group.

Let’s not shy away from the statistics that a majority of population in India is lower caste, being forced into sub-human conditions. They are never included in the mainstream, and always have to exist in the periphery – be it university spaces or job opportunities.

Because of all this, there is a constant rift between the upper castes and the lower castes. Tell me one thing – if I am a first generation graduate from my family, and a Brahmin or a Rajput says that I am an Indian, will I ever accept his version of nationalism?

We are nationalistic, not patriotic

When the government starts really caring about everyone equally, we can then completely recognize ourselves as Indians because then we will we proud of how far we have actually developed.

We can’t help with language superiority

Why do you even have to believe that the language you speak is the best in the world? This is one sick mentality that Indians are infested with. I think that the only philosophy one should follow is – live and let live. You have your language, that is fine, but don’t prove that it is the best, and give other people the space to speak their language.

That’s it. That’s all a sane human being would ever ask for.

Dravidians believe that they belong originally to the land and people from the north are just Indo-Aryan invaders.

Excuse me, but human civilization has been a process of migration and displacement over aeons. No one is an original inhabitant of any place. Sorry to burst the bubble. This is the most brainless thing one could ever fight for or discriminate against.

If I go by your justification, the African civilization was the first in the world. So, self-eject yourself.

Here is the long and short of the story.

You know, every Indian will feel Indian once they feel that they BELONG. You can never be from a place to which you don’t feel you belong. Till then, “being Indian” will only be an accident of birth. And Salman Bhai’s charity organization.

Indian Politicians And The Songs That Describe Them The Best