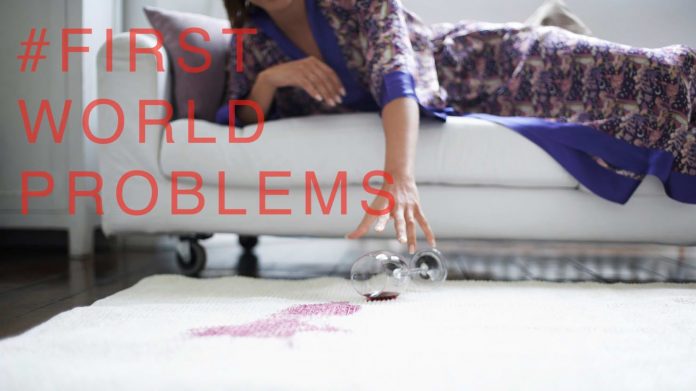 Don’t you hate it when you have to use the loo in a public place but the toilet is on self-cleaning mode? Hah! Yeah, you wish! You’re just praying you don’t see sights that will make you hurl your dinner. What you just saw is a First World Problem (FWP). As you have enough problems of your own, let’s discuss some that don’t affect you. Fun!

On a side note – if you haven’t listened to Chance the Rapper’s latest song ‘First World Problems’ yet, check it out here:

OK, back to other people’s problems.

What are First World Problems?

First World Problems are frustrations faced by those living in privileged circumstances that third world nations would probably roll their eyes at. At present, there are 25 countries which come under the category of ‘first world’, which make less than 13% of the total countries, and thus most of the world is incredulous to FWPs. The term gained recognition as an internet meme in 2005 and became a popular hashtag thereafter on Twitter.

‌
You know how you feel an illogical sense of superiority when your problems are more profound than the people around you? I think that’s the rudimentary psychology behind why we enjoy FWP memes so much. There’s also the element of innocent fun in them. Well, that’s one thing you won’t face in Indian public transportation. It’s a discrimination-free zone where people will sit next to you even if you look like a serial killer. One palm distance and one hand on the pepper spray can. If there’s one thing you owe to your meddlesome neighbors and judgmental relatives, it’s that they made handling virtual haters a breeze. Who has time to stress over the judgement of people you’ve never seen when you have real-life versions right at your door?

Related: How To Make The Most Of Your Shi**y Weekend Oh, the joys of travelling in a jam-packed train- the air humid with the exhalations of fifty people per square meter, your face pressed against a stranger’s sweaty armpit, and there’s no question of moving about because someone has mistaken your foot for the floor (and you’re not even sure who).

Related: Why You Need To Travel Before Starting Work iPhones and iPads? Centuries of living as one with nature have inculcated in us, the third world inhabitants, an aversion to electronic contraptions and materialistic indulgences as we embrace the elements of Mother Earth to connect us and speak the language of our souls.

Related: 5 Movies That Gave Us All An Existential Crisis

OK, maybe I went a little overboard there. Maybe. We don’t have to play the victim all the time, even though you’ll have to admit it’s quite fun. In fact, there are some First World Problems that we can, surprisingly, relate to. Behold.‌‌ ‌

You see, while a lot of the First World Problems might seem too petty for words, it’s mostly just a form of self-depreciating humor. You really can’t help liking people who can laugh at their own faults. The next time someone grumbles about an innocent “first world problem”, don’t jump at their throat. Just hear them out and, if you must, put on a worldly-wise, martyr expression and whisper “ah, young grasshopper” under your breath. It’s much more satisfying.