Isha Ambani recently got married in a lavish and luxurious way that only an Ambani can afford where her wedding card itself cost about Rs. 3 lakh, Aamir Khan and other Bollywood stars were serving guests out of pure silver vessels and more.

It was a grand 3-4 day event where Beyonce performed for the first time in India, albeit to only a selected audience, and John Legend too serenaded the couple.

Overall, it was a big show of money and wealth with no expense being spared in order to announce that Ambani’s daughter herself is getting married.

But it seems that no amount of riches and status can save Isha from society’s expectations on how a newly wed bride should behave, starting from her bidaai itself.

In a recent interview with Vogue India, Isha Ambani talked about various topics from her work, wedding, life after marriage and more.

One of the questions she was asked was about her involvement in the wedding planning and the typical bridezilla question.

While answering that, Isha stated how it was an emotional time and that everyone was crying around her. She then said that, “I only cried at my bidaai because I felt some peer pressure as everyone else was crying, especially my parents.” 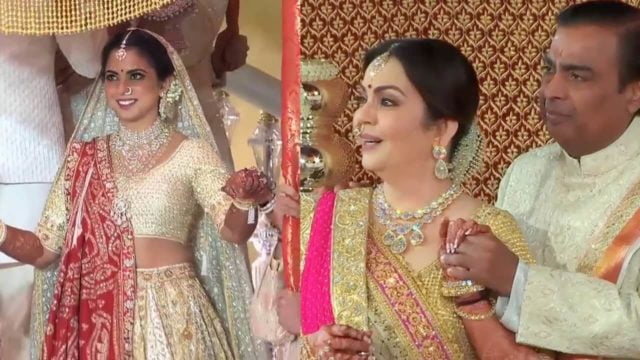 Read More: Ridiculous Wedding Rituals That Are So Regressive That They Need To Stop

To be honest, while I don’t personally stand by the custom of ‘bidaai’ I also would never judge people who do believe in it or have emotional attachment to it.

For some people it is genuinely something that they believe in strongly and the whole concept of ‘bidaai’ is something of a farewell to a young girl off to her new life with new responsibilities and roles.

And I can understand getting emotional in such times and end up crying, for all relatives, parents, and bride.

But what I do not understand is the expectation put on a bride to cry at her ‘bidaai’ and if she doesn’t it is considered like an anomaly where obviously there is something wrong with her.

Although Isha Ambani did not really put it that negatively, but the use of the phrase ‘peer pressure’ surely must have prompted her to shed tears herself even if she wasn’t particularly feeling that way.

Now, let me put it in a bit of a context for everyone as to why crying at a bride’s bidaai was such a big thing:

In the olden days bidaai was the farewell of the bride from her maternal home to her husband’s house for the rest of her life.

In India, cars, telephones and other such modes of communication came in quite late, barely around the 60s or 70s.

Before that only the most wealthy or influential had car(s) because they used to come in quite expensive, even a house phone was a rarity.

So it made sense for the bride and her parents, relatives to cry since their communication with her would essentially be cut off for a long period of time.

Travelling also was not that easy, especially in the village area where it used to take at least a day or two to travel from one village to another. So the fact that the parents and the bride would literally not even be able to see each other for months on end surely made them cry on the day of her bidaai.

This might apply more to the rural areas but back in the day, girls used to be married off really young, some as much as 16 or 17 year old.

Such a young girl getting married off, travelling far from her home, not being able to see or talk to her parents and going to a place with people she had probably never seen in her life was surely a scary scenario.

Again, a bride crying in this case made sense.

#3. Separation Between Bride And Her Home

There also used to exist regressive thoughts of how a daughter became a stranger or ‘beti paraya dhan’ which used to restrict parents and the girl maintaining a close bond.

It was almost frowned upon if a daughter visited her parents house too often after getting married.

But the thing is, all these things do not exist anymore, distance, regressive thinking, child brides are not prevalent that much these days.

In today’s time distance has decreased a lot with communication and increase of digital life. Skype, Face Time and such make it extremely easy for daughters living in different cities to talk with their family with almost no issues.

Besides that, many daughters who are getting married in their city itself often visit their parents, many times even staying over since it barely takes 30-40 minutes to reach them.

Forget about travelling, often girls get married within their own colony, so much so that their parent’s house is barely a stone’s throw away from their husband’s house.

Also Isha Ambani is still extremely involved in her father’s business, so it’s not like her daily life has changed that drastically. Similarly, a lot of girls are these days working with their father’s in their business, so they still see them practically every single day.

The reason it doesn’t make sense to put that much societal pressure on a girl crying at her bidaai because the reasons like young age at marriage, no communication or meeting no longer apply. A girl’s life in today’s time changes very little even after marriage, and her bond with her family does not break right away.