Home Entertainment Movies Is Newton The Perfect Choice For Oscars From India? 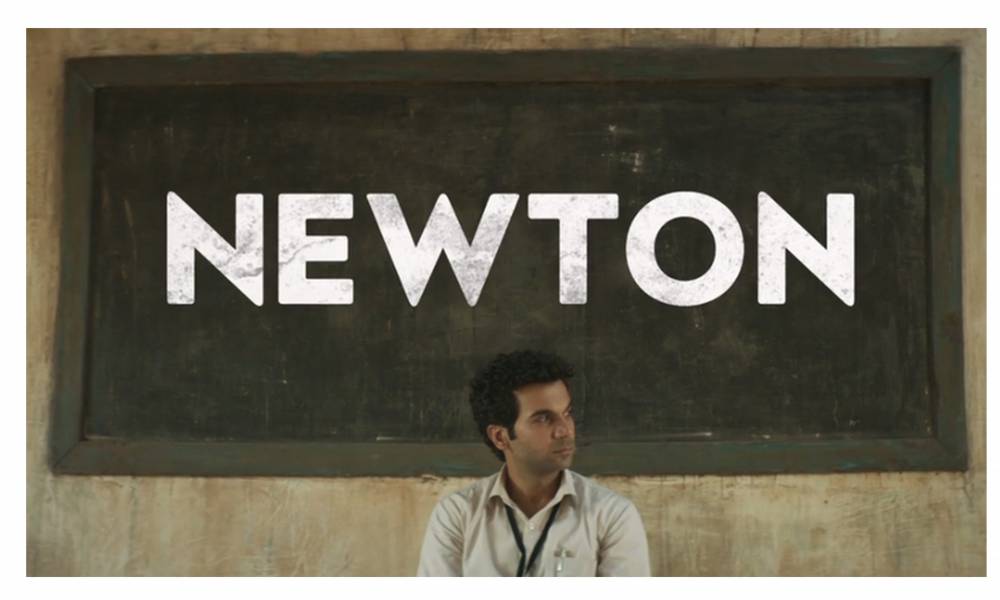 Newton, the satirical drama on our country’s electoral process is our latest entry for Oscars and the film definitely has all the credentials to find itself there.  As per the review of the film in The Indian Express,

It is rare that an Indian film uses dark comedy to make its own points so effectively. ‘Newton’ could also just easily, have been called ‘A Day in the Life of The World’s Largest, Most Complex Democracy’. Or ‘The Great Indian Electoral Circus’.

It has to be noted, however that the film does much more than merely educating its viewers about the electoral process. Without delving into the cinematic excellence, this article is aimed at pointing out the subtle messages that the movie was able to execute flawlessly.

The setting of the day’s plot is in Dandakaranya in Chhattisgarh. This is the forested region named ‘liberated zone’ by Maoists; characterised by lack of governance on part of the state.

In other words, the ultras have their writ in the area and the government is sorely conspicuous via its absence.

True to the ground realities, the adivasi or tribal population is the major or in fact the only stakeholder in the region. The day’s events around which the film revolves is polling day in a remote corner of Dandakaranya, with 76 people covered by the polling station with the main protagonist, ‘Newton’ as the Presiding Officer. The inhabitants are shown entirely disconnected from the so called main stream population thriving at the periphery. Neither the locals are aware of who the poll contenders are nor have any of the candidates visited them – not even to woo them as part of election campaign. It’s possible that this bunch of the electorate does not count towards the election outcome. After-all, they do not find prominent space in any election manifesto.

At several occasions, the lady tribal polling assistant (a local named Malko) conveys to Newton about the peculiar psyche and disconnect of tribals and how nothing matters to the adivasis in the region and perhaps in despair they have ceased to nurse any hope or grievance. When asked as to whether she (Malko) was ‘ashavadi’ or ‘nirashavadi’, prompt comes her reply that she was an adivasi.

The tribal perspective of being sandwiched between the state and the maoists clearly comes out here, pointing to the ‘already died dreams’ of these people. Also, rich legacy of adivasi customs, traditions and self governance finds mention in the film; the aspects that require building up rather than being abandoned for forced development and bull-dozed changes in the tribal way of life.

The pointed ‘othering’, ‘indifference’ and ‘disconnect’ vis-à-vis tribals that is flagged in the film showcases the prevalent challenge of the current shade of Left Wing Extremism in our country. And at the kernel, is the dignity of tribals, trying to form bases of their resurgence.

ALSO READ: India Can NEVER Have an Oscars-Like Event, Do I Need To Tell You Why?

Newton as the Presiding Officer of the polling station, is determined and committed towards a fair and non-partisan conduct, even in the face of problems such as no support infrastructure, and a not so supportive security personnel, etc.

Does democracy really matter for the people in the region? Or are we hell bent to prove our democratic credentials like ‘dreary desert sand of dead habit’, in conflict zones and sub-zones?

On the day of polling, as shown in the film, local tribals carry on with their daily chores with sheer indifference, though not intentional, which stands out in contrast to other parts of our celebrated democracy where elections are seen as empowerment of commoners and possess standing of a festival. The Maoists’ call to boycott polling has not been touched upon in the film, probably to undertone the politics of it.

The populace alien to electioneering doesn’t even know to operate an EVM. What matters to them are local issues like ‘tendu patta pricing’, irrespective of who represents them in Delhi.

There is also a piercing indication in the film as to how serious the establishment is with regards to the conduct of the polling exercise. The local security force commander’s repeated insistence on managing the figures of the poll turnout and his projection to the media (including foreign media) on the conduct of polling, is clearly indicative of the democratic deficit, at least in this forgotten land.

Also, there are two opposite versions of the state depicted in Newton and the security force commander, who have the same end in sight but their means vary. The co-actors who venture out with Newton for conduct of polling, symbolise the nuts and bolts of the government machinery. While Loknath, on brink of retirement, is the seasoned one hard to be ruffled by a thing, there is another team member who mostly sleeps and does whatever he is asked to do – a conformist.

These are questions – most of them harsh- that does not touch our glamour savvy Bollywood flicks.

Newton is certainly a film to be celebrated, which successfully touches upon issues that call for an introspection. A narration that materialises through an average and upright young man who has his heart at the right place – like so many of us in the society.