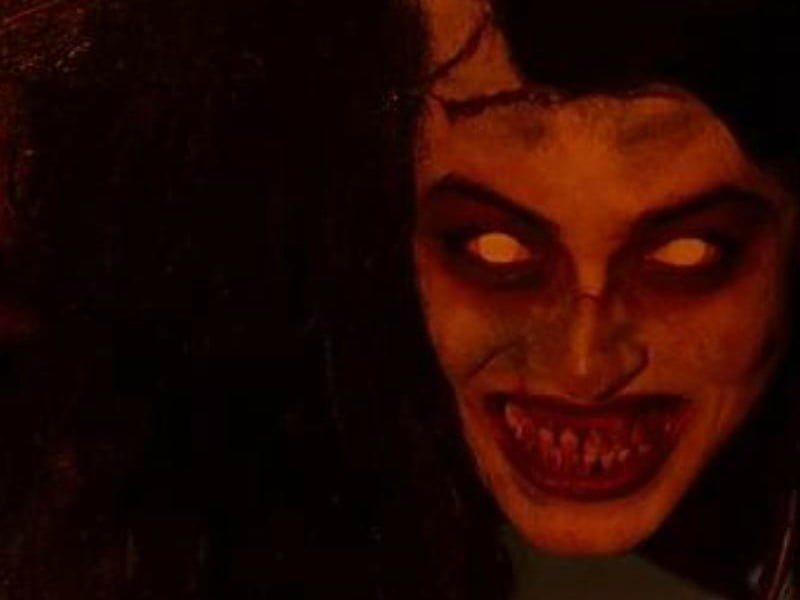 Pick any Hindi horror movie, you will always find one thing in common- a Pandit who chants mantras to rescue (mostly the actress) from evil spirits.

It is as if the element of religion is inevitable in order to spark some fear in the audience. The assertion of good over evil becomes instead a promotion of certain religious rituals and beliefs. Christian priests and church too are brought into the foreground as they seem to possess the fine knowledge of shooing away ghosts!

This is how ridiculous it gets! It is as if God and evil are two co-existing opposites.
Fear in the movie seems to be instilled through the audience’s fear of God and any force that might oppose it!

This 2005 movie begins with the “ungodly” event of a solar eclipse. The event is rendered unfortunate as young Naina Shah loses her eyesight in an accident during this time.

The trailer of the movie itself begins with an image of temple ruins in some distant time accompanied by the sounds of ringing bells of the temple.

These images make the theme of religion inescapable. It also places itself against science and medicine as the doctors fail to realise that Naina’s “naina” is cursed.

It attempts to question belief in science and whether it is greater than any religion.

Related: Why It Helps To Watch The Same Movie Again And Again

The catchphrase of this so-not-horror movie is “Om Phat Swaha”. Whereas in the movie, the evil spirit resides in a joker doll, it is countered by the priest repeatedly chanting this mantra. All the rituals of crackling fire are not to be forgotten here! The dialogue has now hilariously become a famous Dubsmash.

Here again, there is a juxtaposition of innocence and evil. Something as seemingly innocent as a toy is rendered questionable and creates fear. Needless to say, this aspect has been explored in other movies like Anabelle as well.

Horror movies then are not only a means of entertainment through fear but explore the thin lines between the innocent and the devil in our very psychology.

Its rendition in this movie is, however, a comic failure.

Here the evil chooses to reside in the body of a young child who dares to say “Aisa kya hain iss nimbu mein?!”. The lemon and chilli tied with a string are believed among Hindus to cast off the evil eye.

The characters of the movie fail to abide by these. It is depicted in a symbolic trampling of the lemon-chilli-tied-with-a-string by a car. The “Trishul” is also used as a motif in the movie and the construction of a shrine and the character’s newfound belief in God helps rescue the child.

The movie picks up these religious symbols and actually asserts their superiority over human control, namely doctors.

The hero here snatches a Trishul (holy trident of Kali), which he finds at the altar. He discovers it repels Shaitan and ultimately drives it into the evil creature. The entire village is relieved from the devil’s evil nature and is blessed with Matarani’s power forever. The 90s movie cliché of “Amavasya ki Raat” is to be found here too.

So much for the fear which is caused at the expense of religious sentiments. Is the belief or the “non-belief” of God enough to create fear in our psyche?

They certainly make us question the stand we choose to take regarding religion. But the problem here is to assert and reassert divine power over sciences of medicine or psychology. It is impossible to assign any favour to one over the other because of their total lack of relativeness.

But what horror movies tell us is that perhaps fear itself is something that is created through our own consciousness and beliefs.