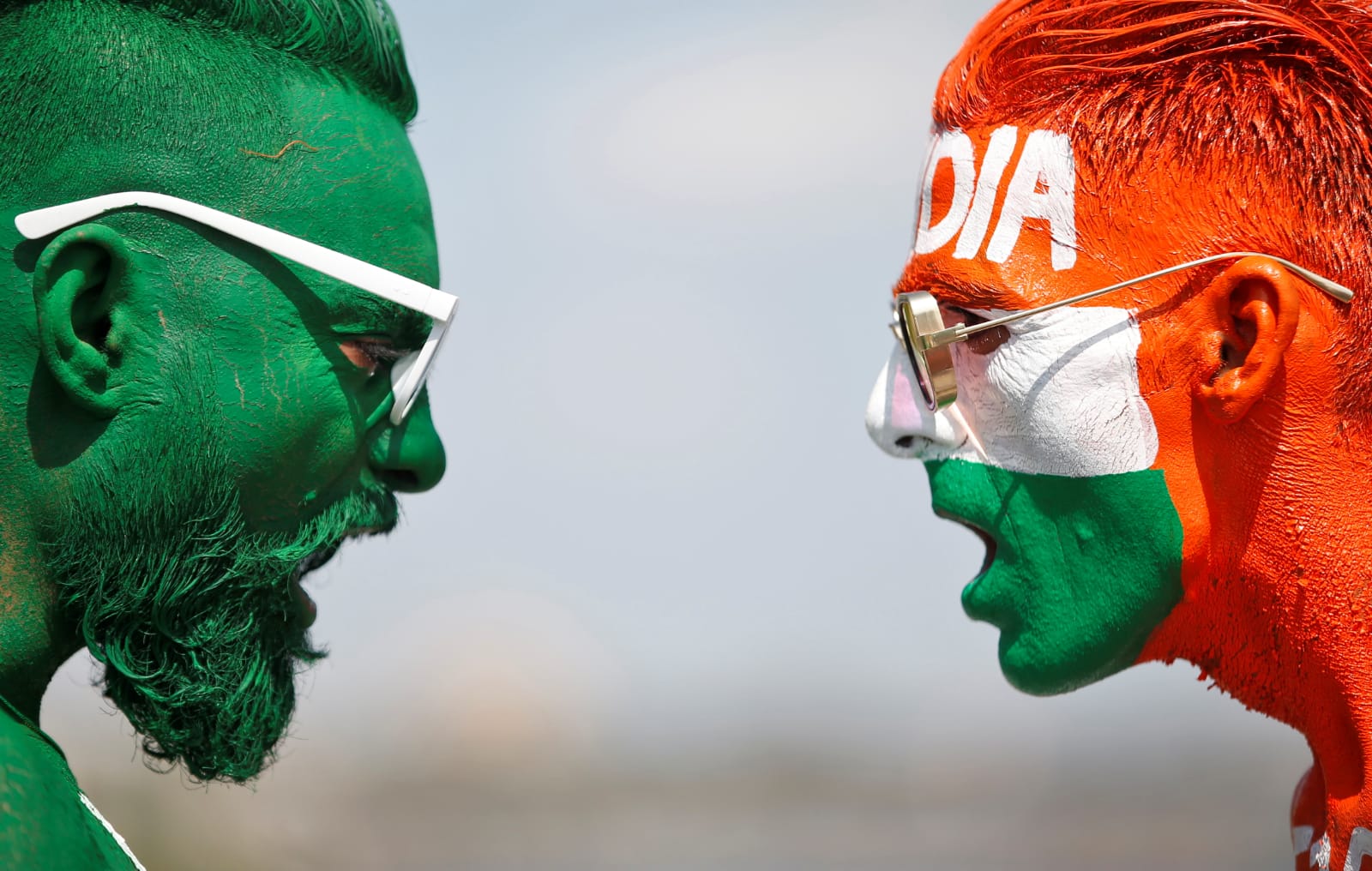 Every sports fandom tends to get a little violent and crazy sometimes, especially when it comes to the Indian cricket team who have devoted fans all around the world. But with all that happened after India lost a match to Pakistan, this fandom is definitely getting toxic.

Cricket is not just a sport for them anymore it has turned into an emotion. Fans blindly love and support their teams, they even go to such extents to build their lives around their favorite team or player. Sports fandoms are considered psychologically healthy as they create communities and give people a sense of belonging.

In India, having strange fans is quite common and they do not shy away from declaring their love, be it building temples for superstars or going on a hunger strike just to meet them.

With about 2.5 billion people following cricket, across the world, cricket is the second most followed sport, after football. For Indians, this sport is almost like a religion. A ranking puts India right on top for having the most dedicated fans in the world. 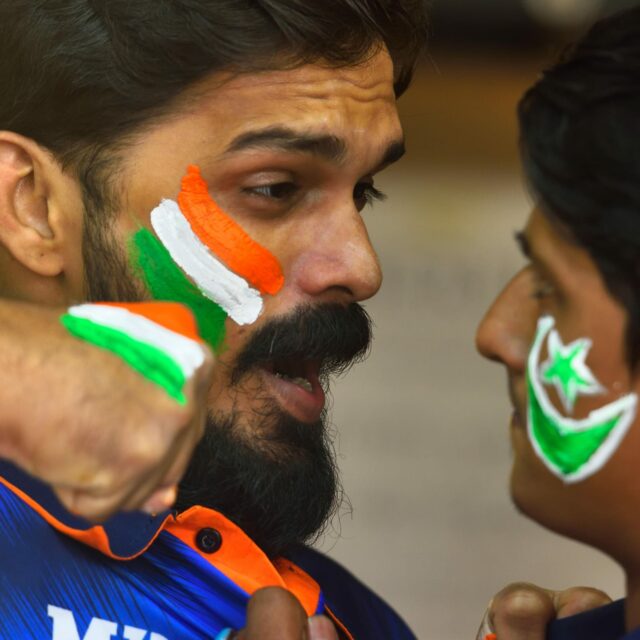 While this fandom puts this sport on the highest pedestal possible, it does have a dark side.  Violence among fans has surely been documented across the world, but here in India, the stakes of this behavior are pretty high.

In a recent face-off between India and Pakistan- a cricket rivalry that tends from the two countries’ border relations, which are just getting worse. India lost the match by ten wickets, a crushing defeat.

What made things worse, it was the first time ever India had lost to its neighbor in a World Cup match. Hours later, with fans’ moods all bittered, toxicity rose far beyond the Dubai stadium.

Tension filled the streets in India as a few students from Kashmir became targets of violence, they were beaten up by a mob of Indians just because Pakistan won. 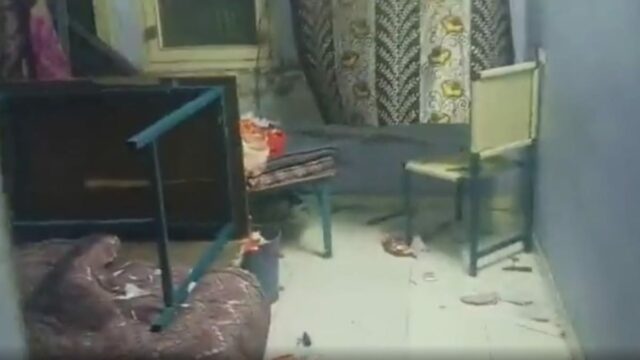 No, not the assailants but the people cheering for Pakistan. A senior BJP party member said in a tweet that they will be charged with sedition, on top of charges like cyberterrorism and “promoting enmity among groups.”

UP Chief Minister Yogi Adityanath stated that anyone found celebrating Pakistan’s win will be booked for sedition. This is not the first time something like this is happening. In years like 2014, 67 Kashmiri students were charged with sedition, after Pakistan defeated India in the Asia Cup. 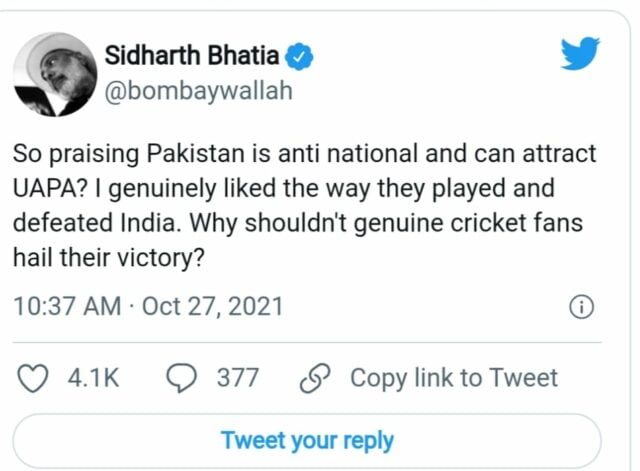 In 2017, following another Pakistan victory, 49 people were booked for sedition out of which 29 were arrested for “alleged celebrations,” cases were dropped after a few months.

Even the Indian team’s players were not left out. Mohammed Shami, being the only Muslim player, faced massive online trolling, he was called a “traitor,” and was accused of giving the match away.

The post-match hate was so vicious that political leaders had to take to Twitter to condemn it. “These people are filled with hate because nobody gives them love. Forgive them,” wrote Rahul Gandhi encouraging Shami in a tweet. 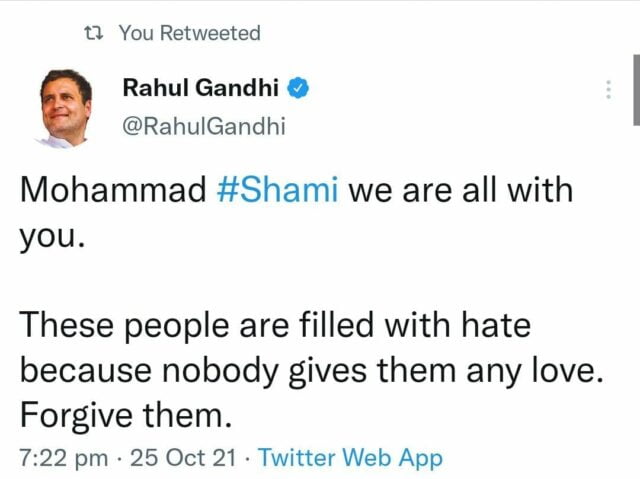 This is not something new, disappointed fans have caused havoc, trolled cricketers, pelted them with fruits, thrown water bottles at them, and even attacked their homes. Let’s not forget their wives and children who are trolled, and have to with rape and death threats.

Virat Kholi’s nine-month-old kid is receiving rape threats, just because her father is supporting Shami as people were attacking him for his religion. 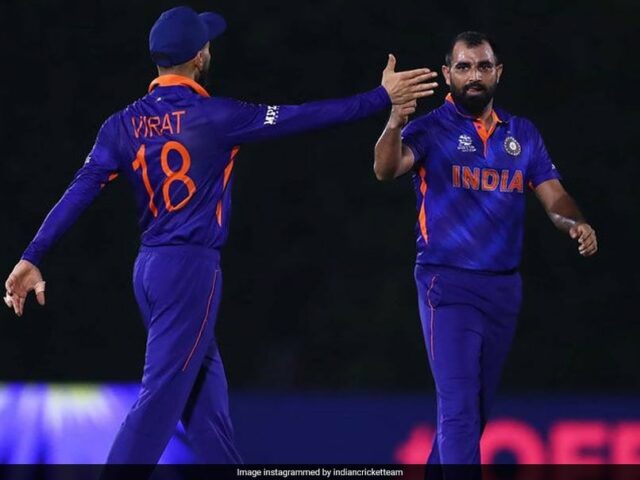 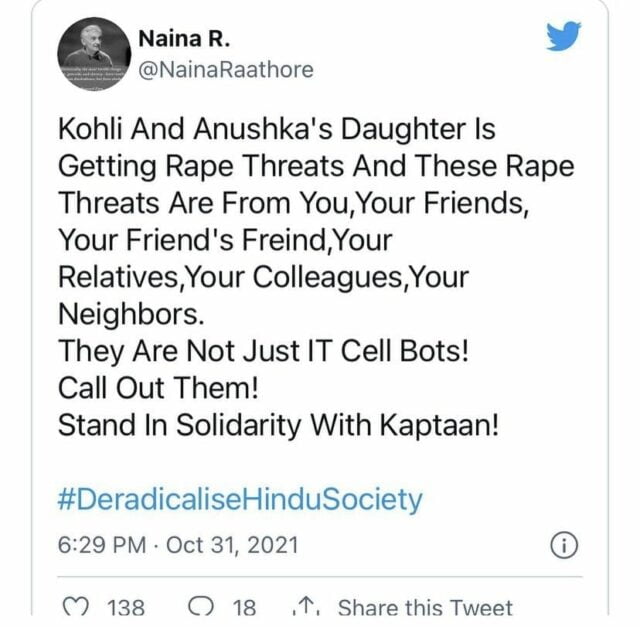 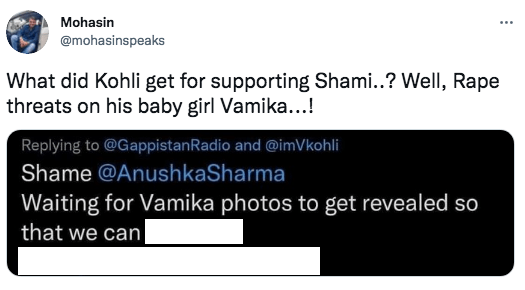 They were quick to send rape threats to Dhoni’s five-year-old daughter, Ziva on Instagram. Both Dhoni’s and Sakshi’s accounts were filled with offensive messages that talked about raping and impregnating Ziva.

Targeting a kid’s father for his performance in a game is the most inhumane and disgusting thing anyone can do. These are the same people that mourned the news of Dhoni’s retirement from cricket, but just one bad performance and they come to bite you. Hypocrites and gross fans are at their peak.

Wives are threatened and criticized for their husband’s bad performance. In India, there is this false belief that a sports person’s career is finished or goes downhill after marriage, hence all the trolls. Even Sania Mirza’s husband and Pakistani cricketer, Shoaib Akhtar, was often blamed for the tennis star’s bad form.

Fans need to understand that it’s not at all cool to invade a sports person’s personal life. Meme culture has led people to believe that it is okay to make fun of someone’s race, color, give rape threats, and demean a legend who brought glory to our nation.

All the noise from a problematic fan takes away the fun and skill of the game from a genuine sports lover.