China’s newest graduates face a tremendous challenge in securing job opportunities for themselves, owing to the increasing competitiveness of their job market.

The seriousness of the situation was brought to light recently when the resume of a graduate from one of China’s top universities, who was seeking work as domestic help, erupted into a massive debate online in China.

The Incident That Erupted Online

A high-end housekeeping agency in Shanghai, called Your Trust Home Service, released the resume of a well-educated graduate who had applied for a job in their agency while concealing her identity.

This particular individual, a 29-year-old woman, was a graduate of China’s prestigious Tsinghua University, a well-known research university that has produced many notable academicians from various fields.

Her resume revealed that she has been in this field since 2016, working either as a housekeeper or babysitter in Shanghai’s most elite residential areas. She was currently looking for a similar job that paid around 35,000 Chinese yuan a month (approximately 3.9 lakhs).

The agency had initially released this information on Xiaohongshu, a site that is popular with luxury shoppers in China, to reach out to their target customers. They usually cater to China’s rich and wealthy and provide well-educated candidates to work as tutors or housekeepers.

The jobs of these candidates usually require them to manage other domestic workers and organize parties, besides tutoring the families’ children. Other than this graduate from Tsinghua University, many candidates claim to be from well-known colleges abroad and speak English fluently.

Read More: Here Are Some Of The Most Difficult College Entrance Exams In The World

According to Vice News, one female candidate claimed to be a certified nutritionist and children’s massage therapist. Her resume highlighted her many skills, including cooking abalones and shark fins, organizing parties, and driving luxury cars such as Rolls-Royce and BMW.

The incident led to an extensive debate online highlighting whether a person gaining education from such a world-renowned institution is a “waste of talents” that could be better used in some other field.

One user said, “Please remember the most prestigious universities, like Tsinghua and Peking University, train talented people who are supposed to improve or change our nation, and to bring benefits to all our people. Isn’t working as a family tutor a waste of such talents?”

Another user said, “Let’s work hard, go to Tsinghua or Peking University, then we can take care of the children of capitalists,”

This discussion was further aggravated by the enormous salary that these people receive. “Look at her payment. It is so high that what she earns is equivalent to senior managers at enterprises. I envy her.”, one user added.

On the other hand, some users were not against the idea of working for such elite families. One user on the social media app WeChat stated that no one should be judged for their choice of occupation, and others cannot decide whether a job is degrading or noble.

The Situation In China

It is a known fact that students in China are placed under enormous pressure and subjected to years of intense training just to emerge as top performers in their college entrance exams.

The Chinese Ministry of Education claims that 40 million people have graduated from universities in the last five years, and around 77 percent of them find jobs upon graduation.

The most significant factor making the difference in the job market is the lack of well-paying jobs. The stiff competition usually pushes the graduates from top schools into finance, education, and school. But the salary is not as high as these individuals expect it to be. 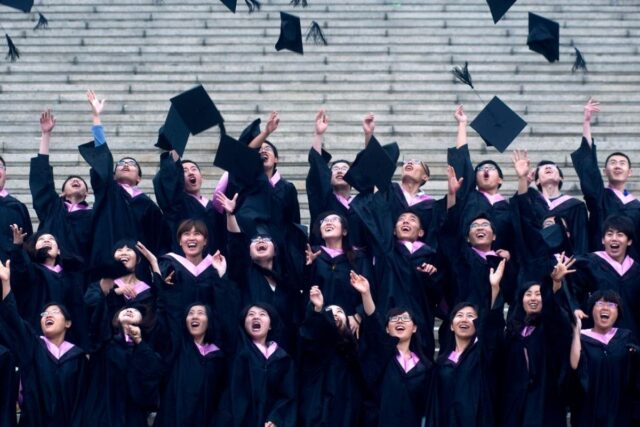 Some commentators claim that it is natural for people to pursue less prestigious jobs with higher pay in such a competitive environment. Apart from private tutors, nannies, and housekeeping jobs, these top graduates also worked in pig farms and livestock farming companies.

In A Pandemic, Can India Overtake China As A Manufacturing Hub?