Home Travel Frustrated Locals Are Asking Tourists Not To Come To Shimla & They... 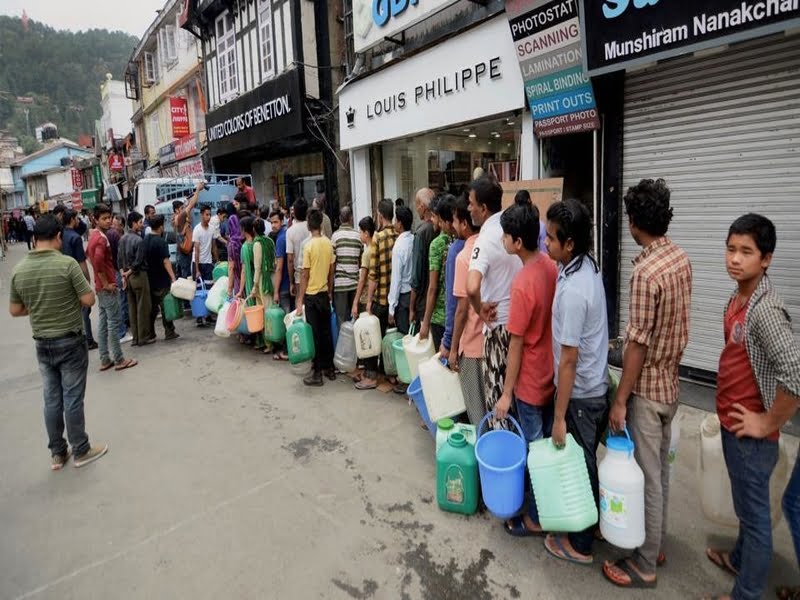 Shimla, capital of the northern state of Himachal Pradesh, has been facing acute water crisis for the past few days. On Tuesday, the town received just 18 million liters of water per day (MLD) against a demand of 45 MLD.

The locals are the worst affected from this crisis. On Thursday afternoon, water was distributed by the municipal corporation under police protection. Earlier, Himachal Pradesh High Court had directed the Shimla Municipal Corporation not to distribute water through tankers. Besides being the capital of Himachal Pradesh, Shimla is also the most popular hill station in India. Set amidst beautiful hills and mystical woods, it is an aesthetically pleasing city. The town’s captivating natural beauty attracts lakhs of tourists every year.

For years, the locals have been demanding the government to set a cap on the number of tourists that can visit the city in a day. After suffering from this acute crisis, maybe it’s time for Shimla to set a cap on tourists.

Let us take a further look at the situation in Shimla:

What caused this water crisis?

The first and most obvious reason for this water crisis is the increasing number of tourists visiting the city at this time of the year. While the resident population of the city is 2.2 lakh, almost 15,000-20,000 tourists visit Shimla every day at this time of the year. This has put immense pressure on the water supply in Shimla.

Also Read: Top 5 Indian Travel Destinations You Can Do On A College Budget

They stay in hotels and use water without caring for the locals. Thus, it is the locals who feel the maximum impact of the water crisis.

Less than normal rainfall has also been a cause of this problem. The rainfall this season was 80 percent lower than usual. As a result, sources of water have taken a hit.

What actions have been taken so far?

The local administration has cancelled the International Shimla Summer Festival, which was scheduled from June 1 to June 5. It has been a major tourist attraction for some years now.

Cancelling the event is being seen as a step in the right direction as Shimla continues to deal with the heavy load of tourists.

Earlier today, the Himachal Pradesh High Court ordered the disconnection of 527 water connections of 224 hotels that have not paid their water bills.

Shimla is also said to have been divided into six zones for the distribution of water. A schedule will be made and water will be distributed only according to the schedule.

What are the locals saying?

As the water resources are being pushed to the limits, clashes are taking place between the locals and the police. The locals are asking tourists to not visit Shimla while they recover from the crisis.

Social media is flooded with such appeals where frustrated locals have expressed their anger at the ever-increasing number of tourists visiting Shimla. Locals are asking tourists to not come to Shimla and select some other destination for their summer vacations.

What are tourist caps and what good will they do?

The locals are also suggesting that the government should put a cap on the number of tourists allowed to visit the city. But before setting a tourist cap, the government has to determine the carrying capacity.

Carrying capacity is the maximum number of people that may visit a tourist destination at the same time without causing any damage to the environment.

Tourism caps would limit the harmful effects of mass tourism and allow the natural environment to maintain its equilibrium. It is an effective way to ease pressure on the resources of a city.

Earlier this year, the government set a cap on the tourists visiting Taj Mahal.

The city of Venice has close to 60,000 visitors every day, which is more than its own population. Similarly, the city of Barcelona is a tourist destination and suffer from similar problems.

While Shimla fights against this water crisis, it is time for us tourists to help our Queen of Hills, as it is famously called, by not visiting the city for a few weeks so that it can recover from it. The locals are dying, so your need for peace or sunsets or hash can wait.