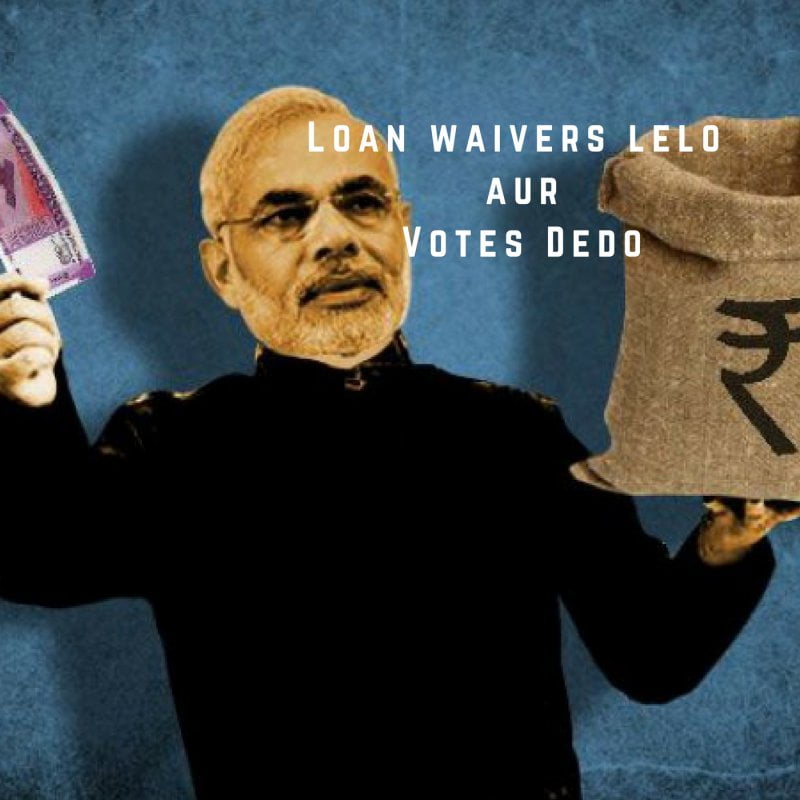 Loan Waivers do no good either to the farmer or to the economy. It is just an emotional pill used to eke out political benefits.

The Reason For Such Loan Waivers

The staple pre-election diet of waiving farm loans to purchase the votes of farmers is what is the reason behind this ‘uneconomical’ and ‘expensive’ trend.

To put some facts into place, the NDA government slumped to a shocking defeat in the 2004 elections because of the lingering effects of the 2002 drought as they had not taken some major steps to remedy the situation.

In contrast to that, UPA stormed back into power in the 2009 elections, largely on the back of a Rs. 70,000 crore farm loan waiver it announced in 2008. The difference can clearly be seen. BJP seems to be walking on the same path to secure its already strong hold over the upcoming elections. What Happens In The Future?

So, the loan relief is hazardous and not in the interest of the country.

Who Pays The Bill For Such Populist Measures?

It is the government which promises to pay the banks who are too fragile to take in such astounding levels of default.

Taking into consideration the case of Telangana and Andhra Pradesh, bank officials had already met the concerned political heads and informed them of the bills if the government goes ahead with its massive waiver plans.

Initially, the banks had explicitly asked the respective governments to pay them the required amount of cash. But aware of the poor financial state of both the states, they got long-term state government bonds. By getting SLR (Statutory Liquidity Ratio) status bonds, they can sell it in the market and get reimbursed later.

Who Is The Biggest Loser?

Waiver or no waiver, it is the farmer who stands to be the biggest loser.  After a certain point of time, the farmer becomes non-bankable. Banks obviously are unlikely to lend to these farmers further as seen in the cases after 1990 and 2008.

More importantly, according to experts,  there is no evidence to suggest that increasing credit flow has resulted in increased production in agriculture or profitability.

Also read: GST is poised to be the next big failure in the slew of disappointing steps taken by the government. Where Does The Real Problem Lie?

The crux of the problem lies in the fact that a farmer is not in control of the produce, unlike other businesses, and is dependent on a cartel of traders to fetch a fair price for his produce. The cartel makes money irrespective of the good or bad crop season.

Most of the cold stores built with help of the government subsidy are owned by corporates. So now what happens is that these corporates buy the produce of farms at throwaway prices, keep them in cold storage, repackage it and sell them in cities at three times the purchase price. The only one who gains is corporate. Both the consumer and the farmer loses.

This cartelization needs to be broken.

It is astonishing to note that annual farm wastage comes around Rs 96,000 crore.

The government needs to fix the loopholes to make sure that protests from farmers are not carried out because waiving loans is bad economics and disastrous for the financial state of our country.