Home Lifestyle Famous Author Of The Alchemist, Paulo Coelho, Thanks A Kerala Autorickshaw For... 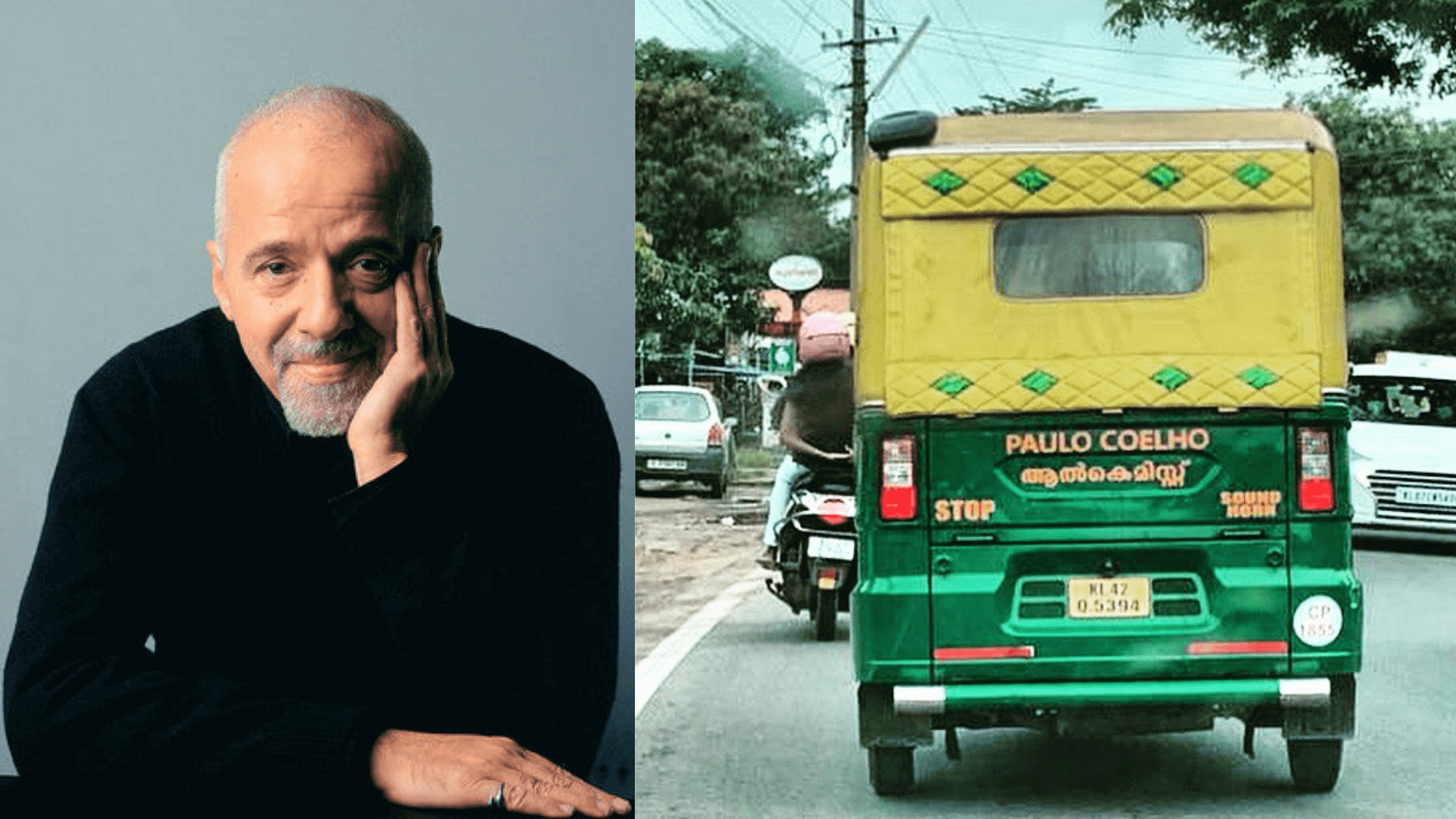 It is always a nice feeling when a foreign personality learns about the appreciation their work enjoys here in India and gives it a shoutout on social media.

Celebrities and known personalities from one’s own country doing so obviously is also good, however, knowing that our appreciation has reached someone across the oceans is always rewarding in another way entirely.

Something similar happened when celebrated author Paulo Coelho tweeted a photo of an autorickshaw from Kerala bearing his name on the back, thanking the people for the gesture and the photo.

This obviously got the attention of Indian people who instantly appreciated Coelho posting about it and giving their own comments on how they have loved the author’s works and listing out their favourite books written by him.

On Sunday, 5th September 2021, Brazilian author Paulo Coelho posted on his Twitter about an autorickshaw (a motorized three-wheeler passenger rickshaw) from Kerala having his name written on its back.

He wrote “Kerala, India (thank you very much for the photo).”

Indian autorickshaws, trucks, taxis and more usually have something or another written on their back. Usually, it is common one-liners about safe driving, respecting women and such, but there are also ones that get really creative and put down hilarious, or thought-provoking or quirky one-liners that have often gone viral.

This particular autorickshaw driver really wanted to tell people who their favourite author is and even had written the name of Coelho’s most famous book ‘The Alchemist’ in Malayalam script.

The Alchemist was published in 1988 and tells the story of Santiago, a young shepherd boy, who travels from Spain his homeland all the way to the famous Pyramids in the Egyptian desert while trying to find love and meaning of life.

Who Is This Mystery Autorickshaw Driver?

Apparently, local media has identified the owner of the autorickshaw to be a KA Pradeep. Speaking to Onmanorama.com, Pradeep stated that he had no idea about Coelho noticing his autorickshaw and tweeting about it. He said, “It was a huge surprise. I am excited to know that my beloved writer tweeted my auto-rickshaw.”

He also explained why the book is so important to him, “I was fascinated by his storytelling method. Since then, I used to grab all his books available in Malayalam. I had taken a break from my work to complete reading the books in one go. I would say Coelho is a person with a magical pen.”

Pradeep had read The Alchemist almost 10 years back and since then has read around 10 more books from the author.

Pradeep was also quoted by The New Indian Express saying  “It was almost 13 years back that I had read Paulo Coelho’s ‘Alchemist’. Though I have only completed matriculation, reading is my favourite hobby. I have read the Malayalam translation of the book, which instantly made me a great fan of the author.

I changed the name of my auto to Alchemist. Santiago, Fatima, the Alchemist and all other characters soon become a part of my life as I don’t even know how many times I have revisited the book after my initial reading. Now with the author noticing my love for his writing and the book, it is a dream-come-true moment for me. As it is said in the book itself, ‘It is Maktub’.”

Pradeep is a 56-year-old auto-rickshaw driver hailing from Cherai, a region near Kochi in Kerala. He usually drives his autorickshaw around Ernakulam’s Shiva Temple and is mostly known for being a big bibliophile or lover of books.

Pradeep’s official schooling might only be till the tenth grade, however, his thirst for knowledge goes beyond that.

According to reports, he has a pretty decent collection of books at his home and apparently has a preference for world classics with some of his favourite authors being Gabriel García Márquez and Leo Tolstoy. In fact, he has even pasted up pictures of Coelho and VKN inside his vehicle.

He has been driving the autorickshaw for almost 25 years and actually his naming his rickshaw after Coelho was quite unusual since people would mostly name it after their family members, film actors, etc. Pradeep spoke about this saying “Many wondered whether I am insane when I decided to name the vehicle after my favourite writer. But it gave me good companions.”

His rickshaw is also frequented by many writers, filmmakers and other artists who like to speak with him about various books and social events. One of them being director Veetrag also stated that “The Alchemist is my preferred vehicle when I am in Kochi. It is a pleasure to travel with Pradeep. We used to discuss a lot of things during the trips.”

Pradeep on his side always enjoys such trips, revealing that some have even given him books as gifts. After this tweet now Pradeep wishes that he could actually meet Coelho in person one day, “I would like to meet and thank him for his books. I hope it will happen soon.”

A lot of people appreciated Coelho tweeting about it and his sweet words regarding this.

This certainly proves again that literature has the power to cross across worlds and languages and touch people deeply when well written.