As the Lok Sabha elections 2019 kickstart in India, one thing which has been a major cause of concern is the turnout of the voters.

In lieu of that, social media outlets have come up with various measures to attract the average Indian first-time voter to the polling booth.

Digital campaigns will prove to be the secret weapon in this year’s elections for political parties to win them as well as to attract voters to the poll booth.

Major political parties have spent millions of party funds on social media and crazy music videos which make no sense. This is specially targeted towards the first-time voters who are the tech-savy generation of India.

At a time when the likes of Krishna Byre Gowda, contesting from Bangalore North has resorted to Folk rap and the Mumbai Collector Office offering prize to the first time voters through a contest, social media platforms are not far in doing their bit to spread awareness amongst first-time voters.

Facebook for one has launched, Candidate Connect, that lets users discover their local candidates and learn more about them.

This feature can be accessed from the top of your newsfeed and users need to select ‘see candidates’ and select their state and polling area to access the information before their district goes into polling.

This feature also allows Lok Sabha candidates to record their poll promises in 20-second videos. A set of four questions are posed in front of the candidates, who will be given 20 seconds to address each category.

“For a year and a half we’ve been working to bring a comprehensive and strategic approach to our work on the Indian elections. We know we can always improve, but we also recognise our role and responsibility in doing what we can when it comes to these important issues,” said Ajit Mohan, MD and VP of Facebook India. 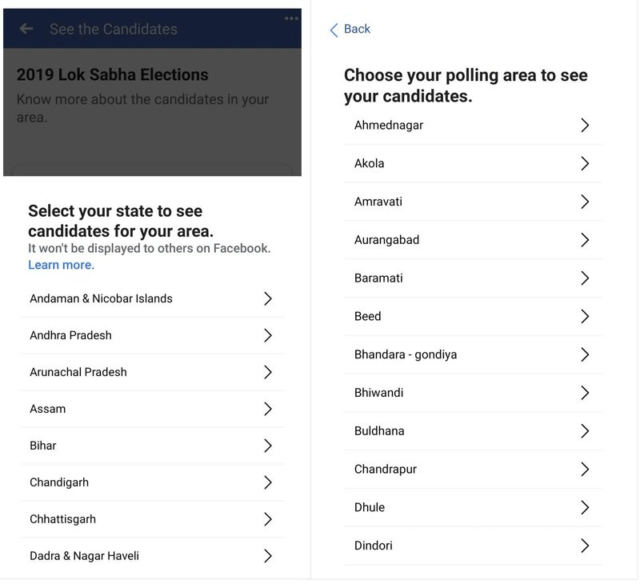 You can also find a ‘Share You Voted’ feature which allows you to share your choice of candidate and lets you celebrate on social media after you have cast your vote.

“On election day people can show that they voted and upload picture. We will aggregate those pictures, prepare a collage of friends and show it on the timeline of people connected to them in a video format. This will amplify voting spirit,” said Samidh Chakrabarti, Director of Product Management at Facebook.

Are other platforms doing similar things?

For starters, Google dedicated its doodle to the Lok Sabha elections on the first day of polling on April 11th with the mark of an inked hand on its homepage.

The app also lets users use funky filters and lenses to voice their opinions on issues around them during elections and share it amongst their friends.

On the other hand, Snap Map helps users to check their online voter roll, gives them information about the time when their constituency goes into poll, and encourages them to cast their ballot with a location link to their polling station.

In addition, the app is also helping users in making use of the resources provided to them by the Election Commission of India. 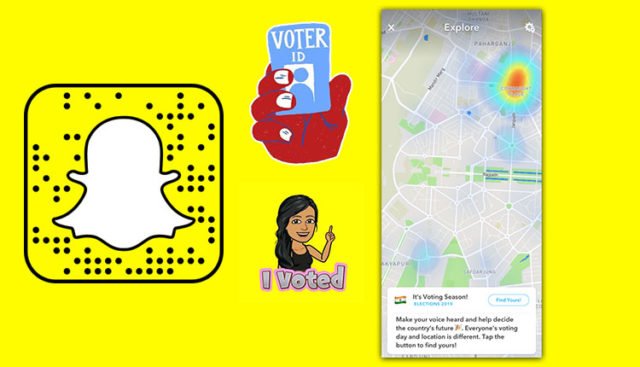 Social media giant, Twitter, has not been far off, having launched a social initiative called #PowerOf18 a few months back to encourage first-time voters in India.

The campaign sought insights from a survey conducted by the company that focused on the attitude of the millennial population in India (aged 18-30) in shaping India’s political and social environment.

Surprisingly, the study found that over 94% of respondents from a count of over 3,600 people would cast their vote in the upcoming Elections in 2019.

Facebook-owned Instagram has also launched a sticker through which users can share their polling experience on the platform. Along with this WhatsApp has been working hard to curb fake news to provide better knowledge to voters in India through radio ads et al.

Hike too joined the party and launched its range of new sticker avatars. The company feels that its range of personalized stickers will definitely encourage first-time voters to go and exercise their right to vote.

All in all, social media is going to play a huge role especially when it comes to attracting the first time voters. I came across all these social media campaigns and thought that they would go a long way in making first-time voters come to the polling booth and express their choice to form the next government in India.

Elections 2019, Journalism And More Relevant Topics Will Be Dealt With In These Courses By Academe India