Home ED Originals Demystifiers Demystifier: Why Are 1000s Of Muslim Migrants Fleeing To Spain From Tourist... 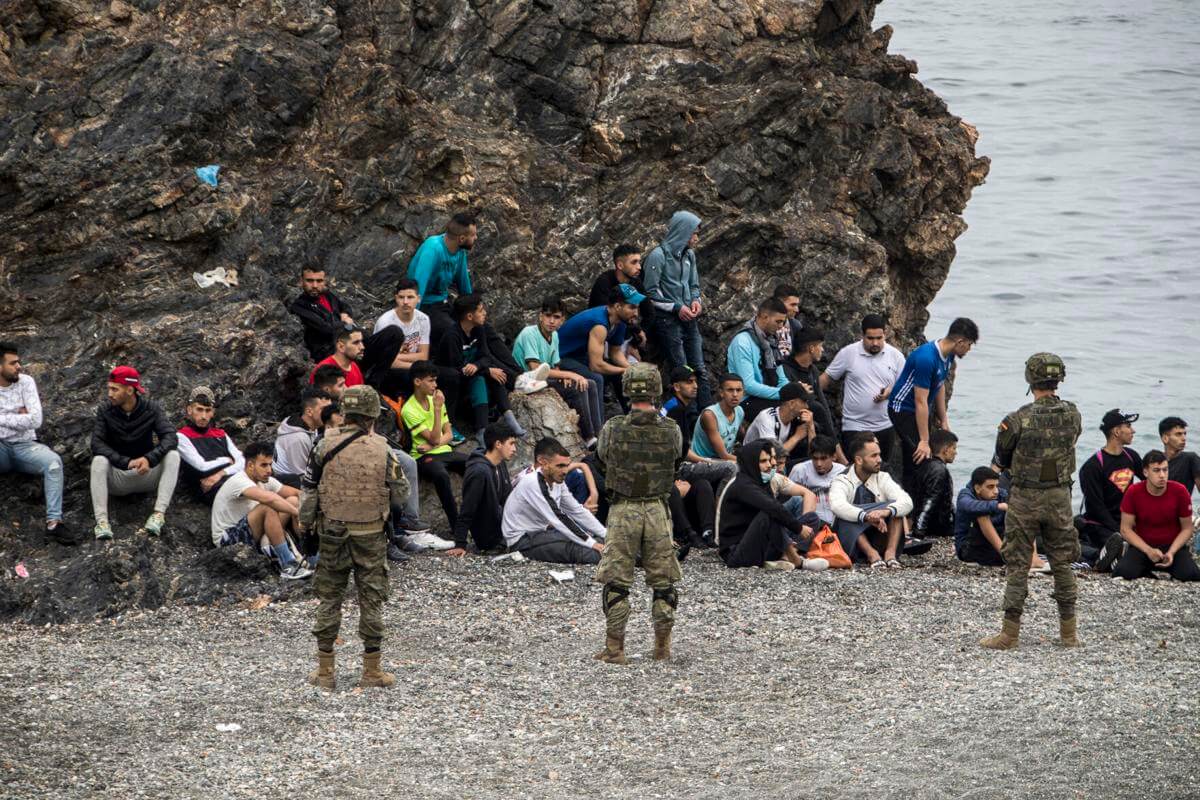 This week when around 8,000 Moroccan migrants, as per the latest reports, tried to enter Spanish borders into the autonomous cities of Ceuta and Melilla caused worldwide news.

Such a high number of people trying to migrate to another place all at the same time was almost never seen before.

Fernando Grande-Marlaska the Interior Minister revealed that around 200 troops along with 200 extra police officers were joining Ceuta’s own 1,100 officers strong border force.

The migrants started to arrive in Ceuta around 02:00 (midnight GMT) on Monday and the number just kept increasing from thereon.

It was said that they traveled through the sea and one person even lost their life while trying to migrate. Around Tuesday the numbers crossed 5,000 migrants and now the latest reports reveal around 8,000 migrants from Morocco have made the attempt to enter Ceuta.

Ceuta is a small Spanish autonomous city that just spans around 20 square kilometers. Juan Jesús Vivas, the president of Ceuta also said “It’s such a strong invasion that we are not able to calculate the number of people that have entered.”

But why exactly is such a high number of people trying to migrate to Ceuta all at once? 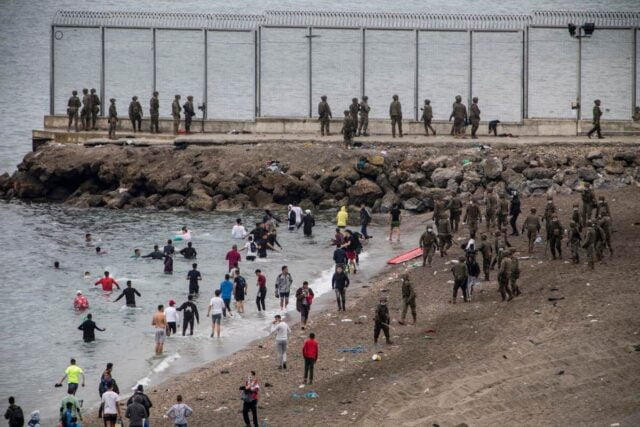 Why Are People Migrating?

Apparently, this has to do with the Moroccan government relaxing border controls over the week after Spain allowed Brahim Ghali, leader of the Algeria-backed Polisario Front, to get medical treatment for COVID-19 in a hospital in Spain.

Ghali and the Polisario Front are strong opponents of Morocco’s rule over the Western Sahara area.

The Moroccan government, on the other hand, saw nothing wrong in relaxing its borders which led to this influx of migration.

The Moroccan Minister of State for Human Rights, Mustapha Ramid, wrote on his Facebook that “What did Spain expect from Morocco, which sees its neighbor hosting the head of a group that took up arms against the kingdom?”

This led to many people who used to live in Spain, particularly Ceuta and other areas to attempt to make their return and get to work.

Most of the Moroccan migrants that had been living in these European regions were sent back once the COVID-19 pandemic started to increase and borders were closed.

But now they wanted to return to these regions so that they could once again start their work and earn some money.

As per reports Amina Farkani, a 31-year-old Moroccan woman who worked in Ceuta for almost 18 years until 2020, said that she saw an opportunity to return to work and earn a living when she got the news that police were no longer controlling the border as strictly as before. 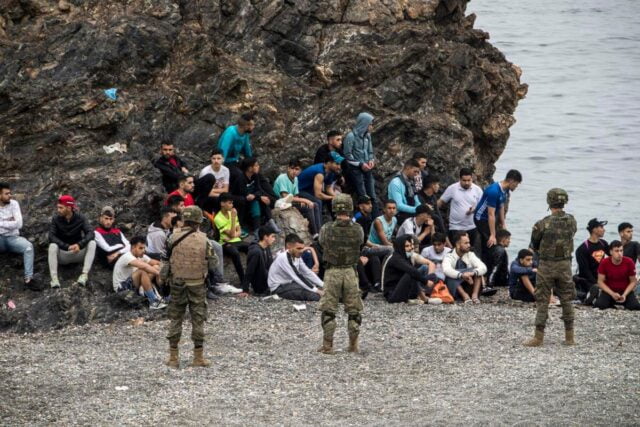 According to Farkani the border control officers on Morocco’s side also did not really try to stop the people from leaving. Talking to the Associated Press she said, “They let people pass and stand there without speaking. People just pass and pass and pass.”

Reports also reveal though that many of the migrants are choosing to return even if they don’t want to.

A BBC report also gave the account of migrant Mokhtar Gonbor, a 30-year-old man who said, “We’ve got no food, no money and we were sleeping in the street last night.”

Mohamed another 30-year-old from Morocco commented on how the main reason for trying to cross the borders was because of work.

As per a BBC report, he said “I want to work and help my family. All of my friends, we want to work.”

Spain’s Interior Ministry has managed to return around 4,000 of the people that migrated.

This is not the first time though that such a high number of migration is being seen, especially through these areas.

Many African and other migrants try to enter Europe through Ceuta and Melilla, seeing it as a way to stable employment and a better life.

In 2020 around 2,228 people tried to migrate to these enclaves through both sea and land, even with the risk of heavy injuries and death. 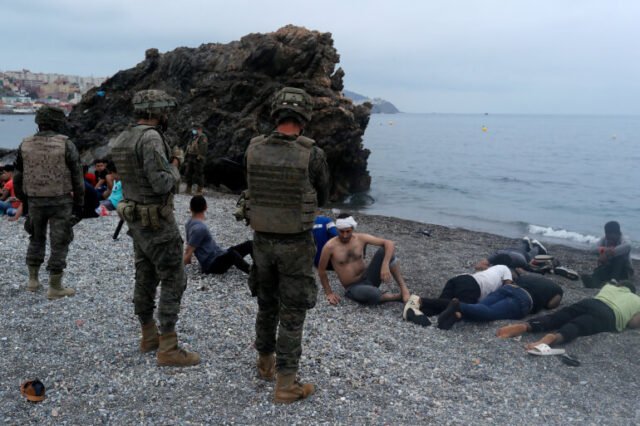 Morocco is also being accused of using migrants in a diplomatic dispute with Spain over the latter’s allowance of giving Ghali medical aid in its hospitals.

Spain’s Defence Minister Margarita Robles has accused Morocco of trying to blackmail the former. Many reports have claimed how passive the Moroccan authorities were when dealing with the migrants and were not really doing much to stop them from crossing the borders.

Robles stated that Morocco had put lives in danger by loosening border controls and allowing thousands of migrants to swim into Ceuta “for a purpose I certainly don’t understand”.

They also told RNE, a radio station that “We will not accept any blackmail, no matter how small, or any questioning of our territorial integrity.”

Several reports and political analysts have theorised that this was Morocco getting back at Spain for giving the Polisario Front’s leader medical aid in their hospital. Also a Spanish journalist Ignacio Cembrero commented to VOA that “The Moroccan foreign minister, Naser Burita, said in January that Rabat wanted Spain to change its policy to support Moroccan claims over Western Sahara. This is how it puts pressure on Madrid.”

Analysts have opined that this is Morocco trying to prove a political point to Spain. Estrella Galan, director of the non-profit Spanish Commission to Aid Refugees, stated that “What has happened in Ceuta is another example of how Morocco plays with migration as a manner to pursue its own interests. The EU should not give ground faced with this pressure.”

Apparently, Morocco has done something similar to this on a smaller scale when it wanted to influence certain policies in Madrid and the European Union (EU).

Demystified: Can EVMs Really Be Hacked?