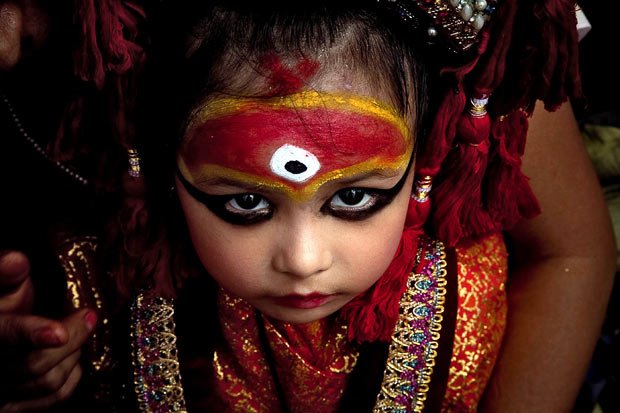 What is it like to be worshiped as a goddess and treated like a princess one day, and then be stripped of your identity and reduced to a mere mortal the very next?

Last Thursday, Nepal welcomed its new 3-year-old living goddess, Trishna Shakya. She was among the 4 final candidates who qualified the strict selection criteria for the position of ‘Kumari’. The final test was to remain calm at the sight of a sacrificed buffalo, in which the Kumari succeeded. She was paraded through Kathmandu and carried to the temple-palace, which will be her home until she reaches puberty.

A Kumari is believed to be the incarnation of goddess Taleju who will reside in her body until her first menstruation begins. Kumaris are expected to remain calm and stoic at all times, they are even discouraged from smiling. Any expressive emotion such as laughing or crying will be interpreted as an omen. She is carried around and her feet are not allowed to touch the ground at any time so as not to defile her purity.

But what happened to the Kumaris who were forced to leave?

Shortly after the new Kumari arrived to take her place, the outgoing Kumari, Matina Shakya (12), left the temple through a rear entrance, carried by her family on a palanquin. Matina wore the red ornate robes and traditional make-up of the goddess for one last time as she was being carried out.

She now has to live in a world completely different from the one she was used to since she was 3 years old. Having lived a life of seclusion, she will gradually have to learn how to interact with people for the first time, which she was not allowed to do as a goddess.

Many ex-Kumaris talk about the difficulties in adapting to this new environment. 22-year-old ex-Kumari Chanira Bajracharya explains how she experienced difficulty even in walking as she was so used to being carried around.

One former Kumari who demystified the Kumari tradition for us is Rashmila Shakya when she published her book From Goddess to Mortal in 2007. The book described the lack of education provided to Kumaris and the further hurdles they had to overcome to return to a normal life. The education provided was so deficient that, at the age of 12, she could only join in the second grade along with her 6-year-old sister.

There are urban legends which surround the Kumaris when they become mortals like any man who marries a former Kumari will die 6 months into the marriage. Despite this, there are many married ex-Kumaris who lead content lives. She wrote the book to shed some light on all the misconceptions about the Kumari tradition.

After it was published, the Nepalese Government introduced 3 mandatory hours of formal education per week and a stipend of Rs. 3000 per month for the further education of ex-Kumaris.

Even though the former Kumaris faced transitional difficulties, they all agree (at least in public) that life as a Kumari was comfortable and now they have moved on.

Then again, there are always exceptions

Meet Dhana Kumari Bajracharya, a 60-year-old ‘Kumari’. She never got her first period and thus remained in her position well into her 30s. But due to pressure from the Temple Committee who believed that only young girls could be Kumaris, she was replaced as the official Kumari. However, this did not shake her from her belief that she is still a Kumari and so she continues to live a life withdrawn from society.

Human rights organizations had applied to the Nepal Supreme Court to mark this practice under ‘child labour’, worried about the repercussions that being a living goddess may have on the young girls. The court declined to do so but brought reforms in the educational situation as mentioned above.

Even now, some organizations are fighting for the rights of these girls, but little can be done when neither the community nor the former Kumaris have any complaints.