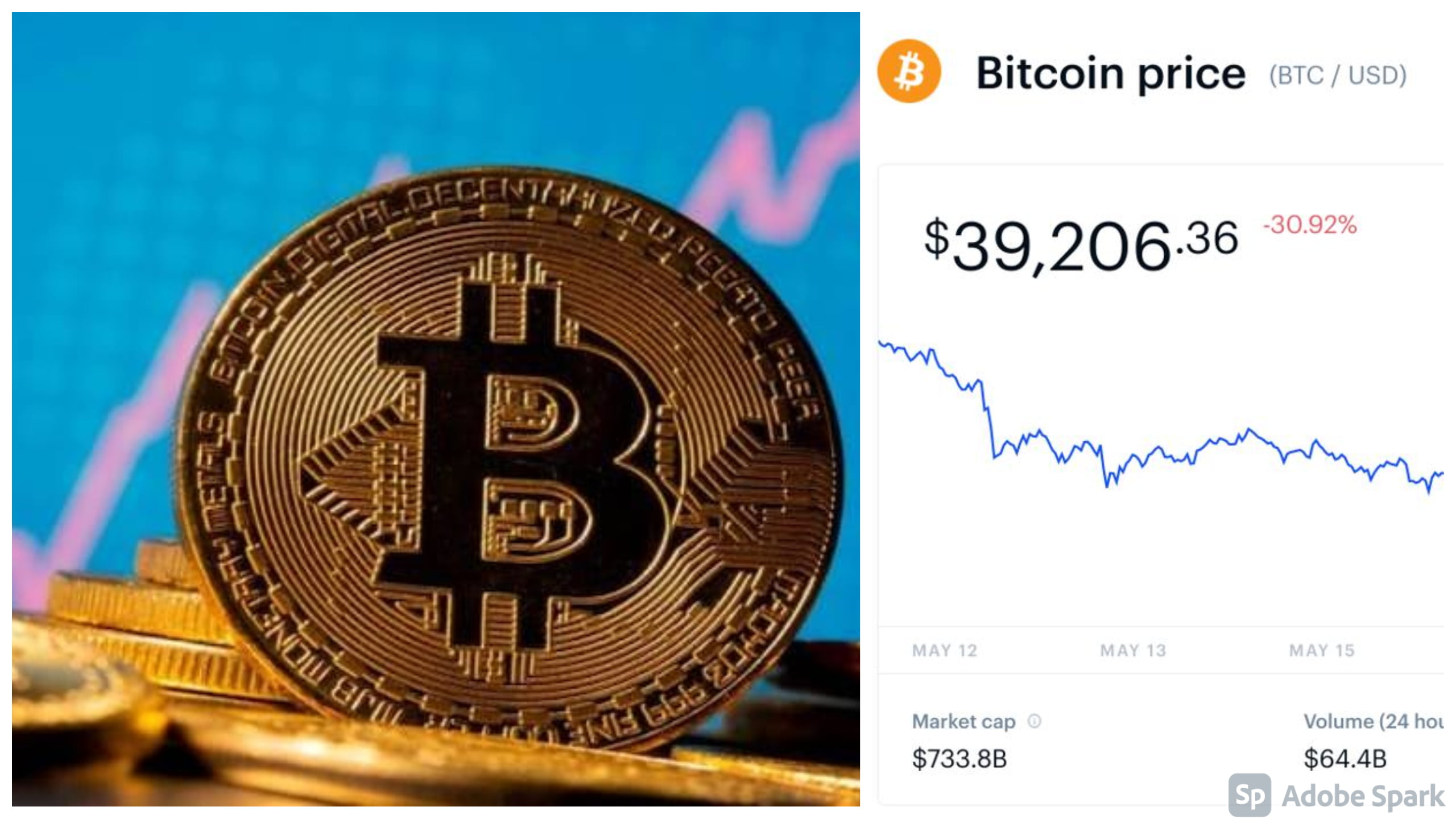 Wednesday marked a significantly dark day in the world of cryptocurrency as all major cryptocurrencies suffered a massive drop. Bitcoin, the crypto giant, dropped to a frightening 29 Lacs from 45 Lacs, causing a steep fall of approximately 20 Lacs.

Major cryptocurrencies such as Bitcoin and Etherum, have experienced a drop of about 37.10% and 42.23%, respectively.

This has caused an enormous uproar in the ranks of crypto investors as they stood to witness the infallible fact of the crypto market being as unstable as it gets.

Numerous financial gurus have stated time and again that crypto currency’s status as an unregulated currency has made its market astoundingly unpredictable and unstable.

The cryptocurrency market has been defined as extremely competitive and the slightest of debacles in its mining can lead to major inflation, owing to its unregulated nature.

Although, it has been professed to be the much-needed currency by the people and for the people, owing to over-speculation it has led to its apparent doom.

The entire conundrum has been faulted to the excess buying of bitcoins by Tesla, which led the entirety of the crypto community to place their bets on speculative trading of Bitcoins. This turned it into a trillion-dollar venture, which shall be deliberated upon below.

What Is Cryptocurrency And Why Is It Important?

To delve into the efficacies of what is cryptocurrency and crypto trade, what one needs to unravel is the mystery concerning the difference between regulated and unregulated currency.

Thus, now to deem what is a cryptocurrency, we shall define it right below;

“A cryptocurrency is a digital or virtual currency that is secured by cryptography, which makes it nearly impossible to counterfeit or double-spend. Many cryptocurrencies are decentralized networks based on blockchain technology—a distributed ledger enforced by a disparate network of computers.

A defining feature of cryptocurrencies is that they are generally not issued by any central authority, rendering them theoretically immune to government interference or manipulation.”

Thus, it can easily be understood that cryptocurrency in itself cannot be tampered with by any party or parties, owing to the sole reason of it being a virtual currency. By terming it as virtual currency, what can be deciphered is the fact that it physically lacks any value unless we add value to it, much like how stocks work.

As 2020 approached its swan song of a frighteningly depressing year, Elon Musk had tweeted a question asking the possibility of turning a profit over accepting bitcoins. With this rather simple tweet, Elon Musk had successfully changed the entire foundation stone of the crypto world from the ground up.

This denoted that Musk was intrinsically inclined towards using bitcoins as an accepted form of currency to capsize on any amount of profit that could be made, owing to the lack of regulation.

Cut to February 2021, Elon Musk admitted to purchasing $1.5 billion worth of bitcoins. This made the whole world gape in awe as investors readied themselves to start investing as quickly and as efficiently as they could.

The incessant purchase of $1.5 billion worth of bitcoins eventually led to further speculation, inflating the base price of 1 bitcoin to 47 lacs INR, and around 63,500 USD (highest value stated as of April).

This made the unsteady market of cryptocurrency extremely volatile, for the slightest disturbance could make the entirety of the structure crumble.

Yet, the worst happened. Nobody could see what was in store owing to the sole reason that the crypto market had not seen prosperity akin to this.

The growth rate had extended from February to April, with an astoundingly consistent growth rate. Nobody thought back then that their doom could arrive this early and this quick.

Elon Musk tweeted a few words that shook the foundations to the core, again, however this time it did not bring prosperity to the investors.

Elon Musk tweeted that owing to environmental concerns concerning crypto mining, Tesla would not be accepting bitcoin as an accepted form of payment for its electric cars. This declaration marked significant doubt concerning the future of cryptocurrency, and in effect, the future of bitcoin.

Aftermath Of The Declaration And What Does It Mean For Investors?

The declaration came at a time when the People’s Bank Of China declared that it does not recognize cryptocurrency as legal tender anymore and shall not be providing the necessary services associated with crypto.

Owing to the fact that China holds major stakes in the cryptocurrency market around the world, this led to investors starting panic selling.

Thus, with bitcoin already placed at a high pedestal of an inflated trillion dollar empire, the panic selling of investors invariably caused a downfall of about 35% in its value.

The 35% downfall of bitcoin was followed by the 42% downfall of Ethereum while other cryptocurrencies displayed a similar graph.

The crypto market bore witness to a market crash much worse than 2017’s downfall and the uncertainty that prevails over the market gaining foot again looms still.

This article does not state that the crypto market is doomed for a few smaller cryptocurrencies have found their footing in the market, such as Matic, which has displayed a 10% growth.

However, what this instance projects to us is the same tale that history has taught us since long, “Go gentle into the good night,’ and don’t over speculate on the market.

Why Is The Government Planning To Ban Cryptocurrency When #IndiaWantsCrypto?