HomeED OriginalsAadhaar V/S No Aadhaar Card: Our Bloggers Fight It Out On The...
ED OriginalsFlippEDPolitics

By Sriraj Singhania and Tanmay Mehra

We are back with FlippED! And this time our two Bloggers are fighting about the much-debated issue of Aadhaar card. While it seems there may come a time when one will be commanded to be born with an Aadhaar Card but the real question is: Will Aadhaar be a game changer?

Aadhaar will bring about a revolution in India.

Very soon, our voter ID and Aadhaar number would be interlinked in order to help decrease voter fraud to a huge extent.

A person with unique biometric data cannot vote twice and so creating a fake voter profile would be next to impossible bringing down the rigging of elections.

Since Aadhaar cards will be gradually issued to all Indian residents, the system can instantly legitimize those Aadhaar card holders who turn 18 to vote. This will increase the voter base a lot.

Aadhaar-backed bank accounts and another online payment system will ultimately succeed in making a Cashless India.

Legitimate and Fair distribution of subsidies

In a recent report, it was explicitly mentioned that Aadhaar helped to eliminate 4.4 Lakh ‘Ghost Kids’ Under Mid-Day Meal Program. This is a just a minor example to showcase the huge virulent corruption in regard of catering to the basic needs of the poor. As Nandan Nilkeni had rightly pointed out, a digital Aadhaar card which would contain the health records of every person can also be used to identify public health trends, build up statistical data and detect any epidemic outbreaks.

It is also common knowledge of how Aadhaar would be of great help to fix our social security net and the subsidies scheme which has been feeding the wrong section for a long time.

From cracking down on fake resumes (in collaboration with the Digital Locker initiative) to putting an end to the never-ending Vyapam Scam, Aadhaar would be a gift too difficult to ignore.

Aadhaar Act clearly states that information will not be disclosed except in the interest of national security.

Moreover, Unique Identification Authority of India has said in clear terms that the card doesn’t collect information on where or why Aadhaar is being used to verify the identity of the concerned holder. The UID database has no information whatsoever on the reason or location of authentication. It only collects the logs of authentication.

It is quite naïve that Aadhaar is being singled out as the sole reason which compromises our security. Yes, there is a need for a privacy law and that the biometric system needs to be stronger. Although the system in place is possibly the best in the world, there has been leakages and we can’t afford that.

The biggest privacy risk that we have right now is our smartphone. All of us will have smartphones as we go forward, our conversations will be recorded, messages read, location easily identified with the GPS or the triangulation of the towers on a real-time basis. So, 24*7,  one knows the location of where we are.

This kind of intrusion of privacy is of an order of magnitudes higher.  Aadhaar is much more sporadic and episodic in nature.

All in all, I think Aadhar is the need of the hour.

Also read: What Was The COALGATE Scam: We Demystified It For You

Aadhar will be a colossal waste of time and energy.

The UID project began as a way to keep track of people in border areas after the Kargil War. It was furthered by the cries of people that lamented the paper trail that had to be created to achieve anything.

There were also multiple reports of people having more than one passport, thus creating the danger of ID theft and impersonation and so on.

But as this project came into being and was finally implemented, things were no more black and white. Numerous concerns were raised about the validity and the methods of implementation of this scheme. The first concern is that of privacy. After all, you are taking the biometric information of millions of people and putting them in a central vault. Just think about it, your fingerprints, name, address, iris scan, all uploaded and backed up.

But critics say that the vault is secure, the government has put many safety features in place. What they are talking about is the way the UID system functions or rather used to function.

Now, any entity which is willing to pay the fees can access your information, except for the core biometric information ie fingerprint and iris scan.

What it can do is get your photograph, address etc. Sound scary?

Speaking of security, the government does not exactly have a perfect track record with that. Around 130 million Aadhaar Numbers and 100 million bank account numbers were leaked a few months ago due to shoddy security practices.

130 million identities, out in the open.

And that is not even the scariest thing. What’s scary is the fact that the government now has access to all your data.

The government has also tried to make Aadhaar card mandatory in many situations. It first started by making it mandatory for welfare schemes and then the PAN card and now SIM cards.

This is dangerous. Given the original purpose was to give a unique ID and keep track of it, we see the government moving towards it now, with the ultimate goal of linking all services to this unique number.

And therein lies the problem. The government  can sail through the loopholes in the privacy act to justify mandatory Aadhaar linkage. And with the basis for ID being your biometric data, you can’t even fake it easily.

Supporters say that digitization will benefit everyone, reduce corruption by cutting out middlemen, make life easy and more productive.

But that is not the case. First of all, for a phenomenon ingrained deep into the minds of Indians, corruption can never be eradicated with a single step, it needs multiple attacks on the very root, ie the mindset. Treat the disease, not the symptoms.

And secondly, no amount of productivity or easement of life is worth a Big Brother watching over you 24×7, tracking your every move. Especially one with horrible security management.

Facebook
Twitter
Pinterest
WhatsApp
Previous articleHow To Fail At Getting Into Delhi University Via The ECA Quota
Next articleAfter Today You Won’t Find McDonald’s Outlets Easily In Delhi, Here’s Why 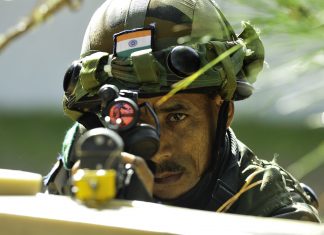 “Sleep Safe My Country, We Are Here To Protect You”: This...

Somnath - December 4, 2021
They say two stars on the shoulder are better than a million in the sky. True to the core, that is what keeps young...