India’s internet population is seemingly ever increasing but a loss of around 50 million customers has dented the pockets of E-Commerce giants plying their trade in India.

As per the reports of Bain & Company, Google and Omidyar Network, the current online shoppers are around 50 million in India but alarmingly, the same number of users have opted out of shopping in the past 12 months.

Most of the users who have dropped out are mostly first-time users who face the constant problem of the language barrier and complex interface.

Statements Made By Experts

As reported in Economic Times, Roopa Kudva, managing director, Omidyar Network India said, “It will be a long journey to get them back. We can’t do version 1.0 of ecommerce for them.” 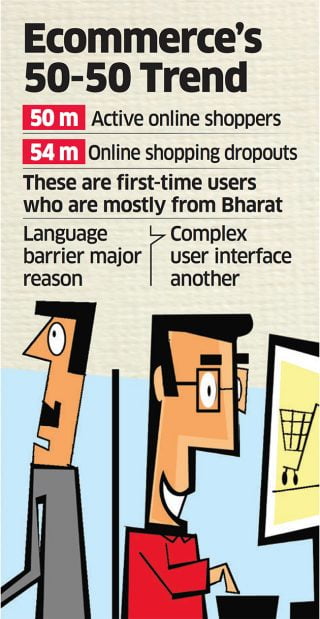 “Optimistically, it’s a $50 billion of realisable ecommerce opportunity if we just get 50% of the 50 million back and get 40-50% of the next wave of 500 million internet users to transact online.”

Also read: Imran Khan- From Playboy To PM And What Does The Change In Pakistan Mean For India?

Why Is There A Decline?

As stated, an equal number of users and dropouts is a matter of grave concern which will impact the e-commerce industry heavily and ultimately decide their course of action for the next few years.

In addition to the above two factors mentioned, the biggest problem noticed is that though the number of people consuming the internet has increased rapidly, millions of users are still reluctant to purchase anything online. This trend is mostly seen in tier 2-3 towns and rural areas.

This fact has been well brought out by Omidyar’s Nautiyal, who says, “A customer sitting in say, Bareilly is concerned whether he will get a refund.”

It is surprising and sad to note that out of 50 million lost users, half of them are women. It is evidently clear that in a majority of rural areas and lower-tier towns, women are still considered as objects whose primary job is to run homes and not spend considerable time on their phones.

This is not only a deplorable state but is something which must be done away with as soon as possible. Usually, we have a perception that with time, women have been more integrated into the e-commerce industry but the disturbing trend as reported by Bain is an eye-opener.

What Steps Are Being Taken To Plug The Loophole?

It is visible that not only online shopping websites but other social media forums also are switching to Hindi and other regional languages to tap into the market that will define the growth of the e-Commerce industry.

IFFCO – Kisan and Pratilipi are two such initiatives which provide relevant concerned information in vernacular languages. Similarly, there are copious ways in which companies are trying to tie the customers to their website and keep a hold on the market.

At a time when internet usage in India is at an all-time high and also, most of the e-commerce websites haven’t yet crossed the ‘zero profit-zero loss’ stage, it is vital to adapt oneself to the demands of the situation at hand.

Why Is National Register for Citizens in Assam The Need Of The Hour And Not A Humanitarian Crisis?