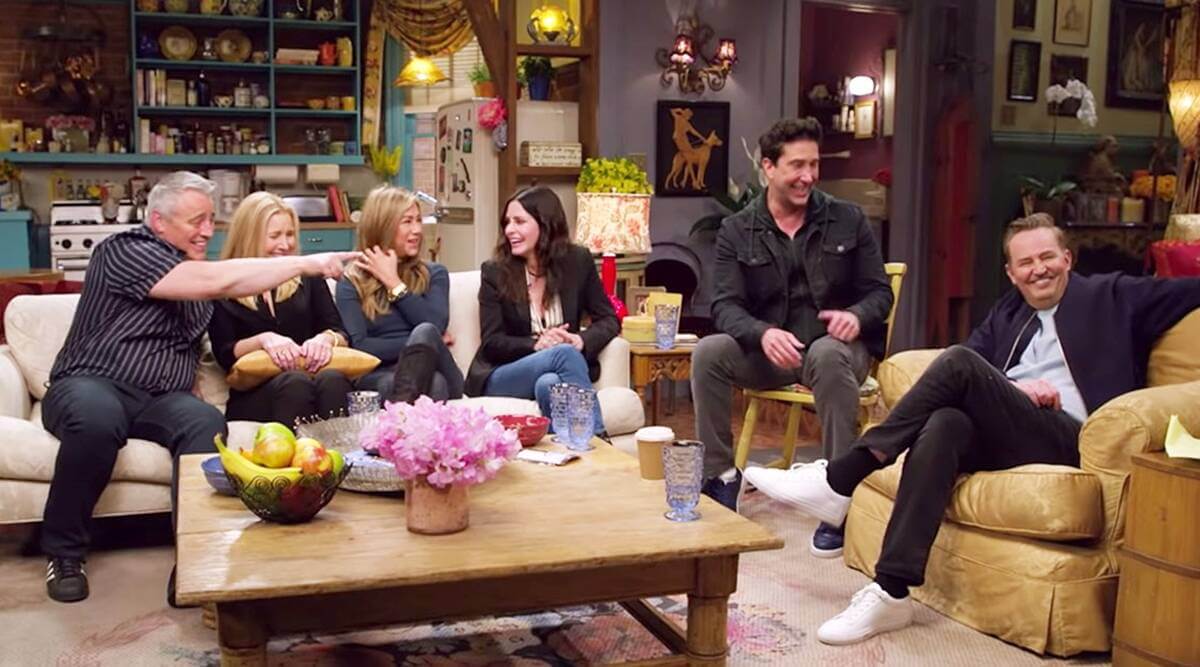 Finally, after years of asking for it, we all got a Friends Reunion. And all it took was a global pandemic to make it happen.

Jokes aside though, the reunion was a much-needed treat after the depressing times we are all in and allowed us to travel back to a time when things used to be much simpler.

Along with many things, the cast Jennifer Aniston (Rachel), David Schwimmer (Ross), Matt LeBlanc (Joey), Courteney Cox (Monica), Lisa Kudrow (Phoebe), and Matthew Perry (Chandler) and creators of Friends, revealed a lot of things that we didn’t know before.

1. Why Was Mathew Perry Slurring

Mathew Perry who played Chandler in the show was seen to be slurring a bit during the interview. This concerned audiences, however, it was revealed it was simply because Perry had had an emergency dental surgery just a few hours before the taping of the interview.

Sources revealed that “Matthew turned up to the reunion [in April] and members of his team said that he had an emergency tooth procedure that day,” and added “That was said to impact his wellbeing and also how he was feeling. [Matthew] had been in pain from what we understand, which caused the slurred speech.”

During the shoot for the episode ‘The One Where No One’s Ready’ in season 3 Matt LeBlanc actually dislocated his shoulder while filming the scene where Joey jumps towards the chair that he and Chandler were fighting over.

The creators in the interview during the reunion said that they had already filmed the sequence around three times, but God knows why they wanted to shoot a fourth time too.

LeBlanc, however, dislocated his shoulder during the fourth time and his shoulder came out of his socket. The shooting was halted and the ending of the episode was actually delayed until LeBlanc fully recovered.

During the reunion, Jennifer Aniston and David Schwimmer who played Rachel Green and Ross Geller revealed that they both crushed on each other while filming.

Schwimmer said, “The first season I had a major crush on Jen – we were both crushing hard on one another, but it was like two ships passing ‘cause one of us was always in a relationship and we never crossed that boundary.”

The whole Ross and Rachel ‘will-they-won’t-they’ thing was huge among the fans and kept them intrigued with the pairing for years.

Aniston said that they both put their feelings into the characters instead “channeling all our adoration and love for one another into Ross and Rachel”.

Read More: The Friends Show Would Fail Massively If You Tried To Make It Woke

Mathew Perry also commented on how anxiety-inducing it was to perform in front of a live audience. Stating that if they didn’t laugh at his lines or jokes he would start to sweat and get fidgety.

David Schwimmer also revealed that he did not like filming with Marcel, Ross’s pet white-headed capuchin monkey.

He commented on how the animal would mess up a few takes of the episode and not just that but while filming Marcel would often hang around David’s neck. And after eating the live bugs given by his handler would wipe his hands on the actor.

Schwimmer said “I would have monkey grubby hands all over. It was time for Marcel to f*** off!”

6. NBC Asked The Audience About Monica Sleeping With Paul The Wine On Their First Date

Apparently, the NBC network, on which Friends used to air was not quite open towards sexual promiscuity from the female characters.

Creator David Crane revealed that network head Don Meyer was skeptical over showing Monica to have slept with Paul the wine guy on their first date while the pilot episode was being shot.

Meyer even decided to take a poll from the audience, Crane said “The network gave the audience a questionnaire that was so skewed. It basically said: ‘When she does this, is she a trollop? Is she a slut?'”

Thankfully though the audience was more open-minded and said “The audience all came back with, ‘No, we still like her.'”

Crane added that “Then Don got on board because he said, ‘Well, I’m OK with it because she gets what she deserves when the guy sort of screws her over.'”

7. The 27-Second Applause When Chandler And Monica First Got Together

This is not really a secret since Mathew Perry did reveal this in a 2004 film after the Friends show ended. But the reveal of Monica and Chandler for the first time got a huge 27 second long applause from the live audience.

We witnessed it for ourselves in this reunion when they showed a behind-the-scenes clip of the scene when we first see Monica coming out from under the covers on Chandler’s bed revealing that they had hooked up in London right before Ross’s wedding.

When Courtney Cox comes out the audience went wild and the creators said that they allowed them to fully have their reaction, choosing to let them clap, hoot, and whistle for as long as they wanted.

Breakfast Babble: Thoughts I Had About The Friends Reunion Teaser As An Indian Fan