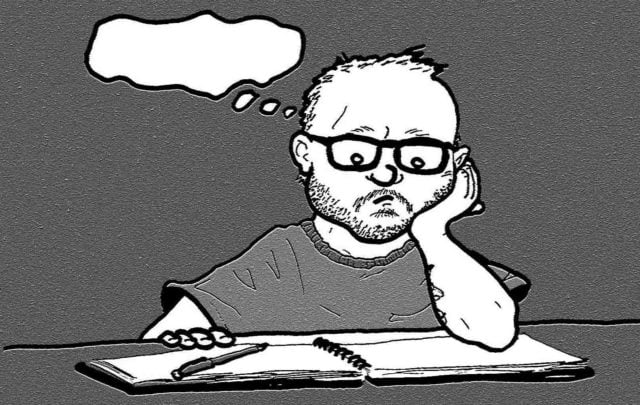 No matter how many times people say that writer’s block is nothing but laziness, those who write know it’s a real problem.

Writer’s block occurs when all you can do is stare at that blinking cursor, and no words come out. It can occur only before the first draft of whatever you’re writing is finished.

Ernest Hemmingway said that the first draft of anything is shit, and that’s true. But, once you have the first draft, the nightmarish part is over. What comes after is ruthless editing: and, fortunately, there is no such thing as editor’s block. Here are a few ideas as to what you can do when your muse is being elusive.

1. Exercise the right side of your brain. Listen to music, play a video game, or play a musical instrument, if you can. Anything to get the creative juices flowing. Preferably, do something you haven’t done before, something that’ll make you think differently.

2. Read. It can be a book, a blog – anything creative. And in case you’re wondering, reading articles like this one does count, but don’t stop there. Read until you find something that gets you thinking.

3. Talk to someone with whom you can have a constructive conversation. A friend, a sibling, a parent, or even just some stranger on an online forum. Just talk to someone – and I don’t mean small talk. Have a serious conversation. It could be about anything – current news, social issues, politics, love, or life. 4. Write something other than what you were stuck on. Look for prompts online and write a new short story – no matter how trash it is. Write fan fiction, if that’s your thing. Or pick a topic and write a blog. According to Charles Bukowski, even writing about a writer’s block is better than not writing at all!

5. Work on some other aspect of your writing project. If you’re writing a story when you experience a block, leave the spot you were stuck on and work on other aspects of your story. Write character sketches. Draw character illustrations, or if you’re shit at drawing, look up images which would fit your character’s description. Write a poem about your characters. Edit the already written parts of your story. There’s a lot to do with one writing project!

6. Freewrite. If you didn’t already know, freewriting is an exercise used by writers to gather their thoughts before beginning a document. The result is an endless free-flowing paragraph without punctuation. You can either pick a topic or just write without one. Even if you begin with “I don’t know what to write,” you might be surprised at what you come up with when you follow that loose train of thought. You can set a timer for yourself, and just keep writing whatever random thoughts cross your mind until the timer beeps.

What will not help you tackle that writer’s block are things like procrastination, wallowing in self-pity, or refusing to write until you magically feel inspired. In the end, you overcome writer’s block by writing. Start somewhere, and see what happens. Do not let your block paralyse you; push through.

Trust me, you got this!