Home Fashion 16 Year Old Pakistani Beauty YouTuber With Down Syndrome Is Breaking The... 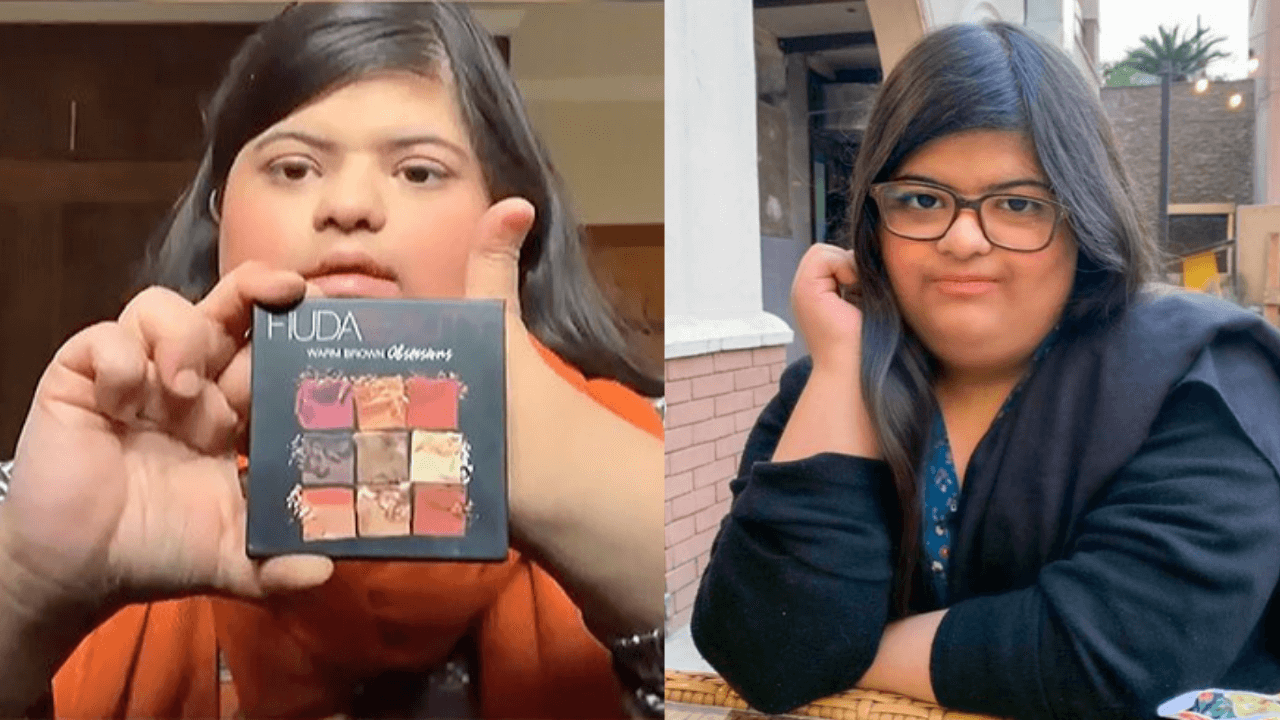 Pakistan’s first beauty YouTuber who has Down syndrome is taking the world by storm. She is charming, witty, determined, and unstoppable. She is Ridda Zahra Naqvi.

Ridda started her social media venture just a month ago and her videos are already accumulating more than 100,000 views.

People from all over the world liked and shared her videos so many times that even Pakistani celebrities like Zara Noor Abbas and Ayesha Omar have watched and encouraged her videos.

The Rise To Fame

On February 7, Syeda Zainab Naqvi, Ridda’s sister, uploaded her first ever make-up tutorial on her account captioned—“My little sister wanted to do my makeup and told me to put this up because she wants to be a future makeup artist.”

“As we saw the video go viral, we wondered what was happening! This is because people in Pakistan do not usually look at special needs children like this,” said Ridda’s sisters.

The netizens admired her so much that Ridda gained 40,000 followers within a few days only. Alina Naqvi, Ridda’s sister who handles her account thought of this as a ‘welcome surprise’.

People have reacted with positivity and encouragement, their virtual support has motivated Ridda and given her a boost of confidence to create more content for her followers.

Ridda’s sister gave a positive remark about the comments on the sixteen-year-old beauty guru’s videos. “I enjoy the comments the most; they make me really happy,” said Naqvi.

Also Read: Breakfast Babble: Why I Think YouTube Has Become A Better Streaming Platform For Gamers Than Twitch

“This is the first time she’s done this,” she continued. “We are really happy to get so much appreciation from people and the media.”

Ridda, the star herself, is full of talent and dreams. She likes artistic projects and wishes to broaden her horizons further. “I like making videos a lot and being a makeup artist,” she said, “but I also plan to be a photographer and go into teaching as well.”

Farah Naqvi, Ridda’s mother told the media “I am so proud of her. It feels like there is a lot of appreciation for her talent and how she carries herself,” she said in an interview. “Members from Down syndrome communities in Karachi, Lahore, and Islamabad have been reaching out as well to tell us how happy they are.”

She pointed out that her daughter managed to become a sensation because of ‘poise’, ‘confidence, and ‘visibility’.

Farah Naqvi also highlighted that the representation of a community that is virtually absent from mainstream media is something to be celebrated.

The Problem Of Representation

Ridda’s rise to fame and visibility is, no doubt, positive reinforcement for every person who has Down syndrome and even for people with other learning disabilities, but it also draws our attention to the absence of these communities from the virtual space.

Down syndrome happens when an extra copy of the 21st chromosome is developed in the fetus during pregnancy, resulting in significant symptoms. Every person who has Down syndrome is unique as there is a variance in symptoms for every individual.

According to the statistics provided by W.H.O, Down syndrome occurs in every 1 in 1,000 to 1 in 1,100 live births worldwide. ThePrint also reported that Down syndrome is the most common disorder in India with 30,000 cases every year. It is common in Pakistan as well.

Yet it took so many years for a person with Down syndrome to become a YouTuber in Pakistan.

The question thus arises—If a significant amount of the world population has Down syndrome, why is there a lack of visibility in media?

As a society, we have made virtual space a very significant part of our lives, everybody is on the internet. The pandemic has further accelerated our dependence on the internet and led to a burst in content creation.

Still, we come across very few people with disabilities.

It’s partly the overwhelmingly ignorant attitudes prevalent in the society and partly the stigma attached to disabilities that leads to social exclusion. Both of which make a negative impact on these communities and their families causing them to stay alienated.

People with Down syndrome can lead a fuller and more independent life if given the right resources environmentally, socially, mentally, and economically.

Ridda’s confidence, her success and her rise to popularity are a testament to this reality. Her loving and supporting family encouraged her and provided an environment that fosters her growth.

Hopefully, this story will inspire a positive change in the community.