The elections are a crucial time for a democracy like India. The Bihar elections are going on in full swing, and the debate on which political party will win the majority can be viewed on every mainstream news channel.

Elections, however, overshadow any other major happenings in the country. One such incident that has been blatantly ignored is the plan to convert Goa into a coal hub.

Plans To Turn Goa Into A Coal Hub

Goa is known for its golden beaches, lush greenery, pristine wildlife, and beautiful ecology. It is one of the few Indian territories to have not faced the wrath of modernization and mass-scale ecological destruction. Rather, it was, until now.

The state serves as a crucial transport link for coal transportation to Karnataka and surrounding places, where there is a great demand for this natural resource due to dozens of steel factories. The government wants to increase the state’s transportation capacity.

The proposed infrastructure projects are:

The centre-approved 2016 Sagarmala Programme is believed to be the main culprit behind it all. 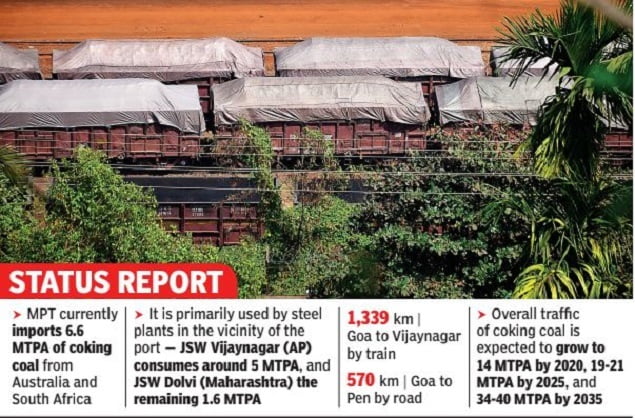 Read More: Modi Sarkar Is Going Easy On Environmental Clearances & It Is NOT Ok

What Is The Sagarmala Programme?

Goa currently imports 10-12 MTPA (Million Tonnes Per Annum) coking coal from the Mormugao Port Trust (MPT) to the adjacent states. The Sagarmala Programme, however, proposes to develop the infrastructure in a way that the state can transport up to 137 MTPA coal.

As per RTI activist and lawyer Savio Correia, “They (the Government) have done it beautifully. Breaking up the larger project of coal hub and transportation into small projects, like pieces in a jigsaw puzzle, so that the true picture, and hence, the cumulative impact of the project on Goa will never be known.”

The doubling of the railway line remains the most important fragment of the whole project. To make sure that the supply is in sync with demand, this had to be completed by 2019. However, the state government permitted the same in June 2020.

Goa’s Environment Minister Nilesh Cabral earlier said, “I am not for coal, but I am for development for the nation,” in support of the project, as reported by Reuters.

Now, the project is going on at full speed. The railway authorities are working on the same since last week, as reported by India Today.

This construction comes at the cost of mass deforestation – harming the wildlife and ecology of the state. Many people are going to be left homeless, many animals will die, and the pristine forests will be affected the most.

As a result, thousands of Goans came out on the streets in Chandor district to oppose this move and save nature from the worst.

Protests In Goa On Sunday Against The Project

“This is going to devastate Goa’s coast, fisheries, rivers, villages, Western Ghats, forests, and the very essence of Goa. That is why people of Goa are out on the streets with the demand to stop coal transportation from Goa,” said Abhijeet Prabhudesai, co-convenor, GKN, People’s Movement.

Moreover, the increase in coal import would not necessarily benefit the state monetarily either. Only the corporate giants are expected to receive profit from this move.

“By importing coal, the nation will lose valuable foreign currency. Besides, while Goa stands to get no revenue despite serving as a coal corridor, even Karnataka will have to suffer from heavy pollution owing to several power plants there,” explains Rajendra Kakodkar, management consultant and an expert in mining matters.

Hence, neither the state nor the country will benefit heavily from this.

An additional disadvantage is the noise and air pollution caused by large-scale transportation of coal. Coal dust, being very light, remains in the air for 3-4 days at a time, posing a grave threat to lungs.

As a result of protests and mass opposition, Nilesh Cabral has assured that Goa will not be a coal hub. The Chief Minister of Goa, Pramod Sawant, will provide proof of the same in a few days.

In times when we should try and reverse or at least delay the climate change, such activities are making it only worse for us and our future generations. It is high time that the government comes to its senses and takes a decision appropriately.