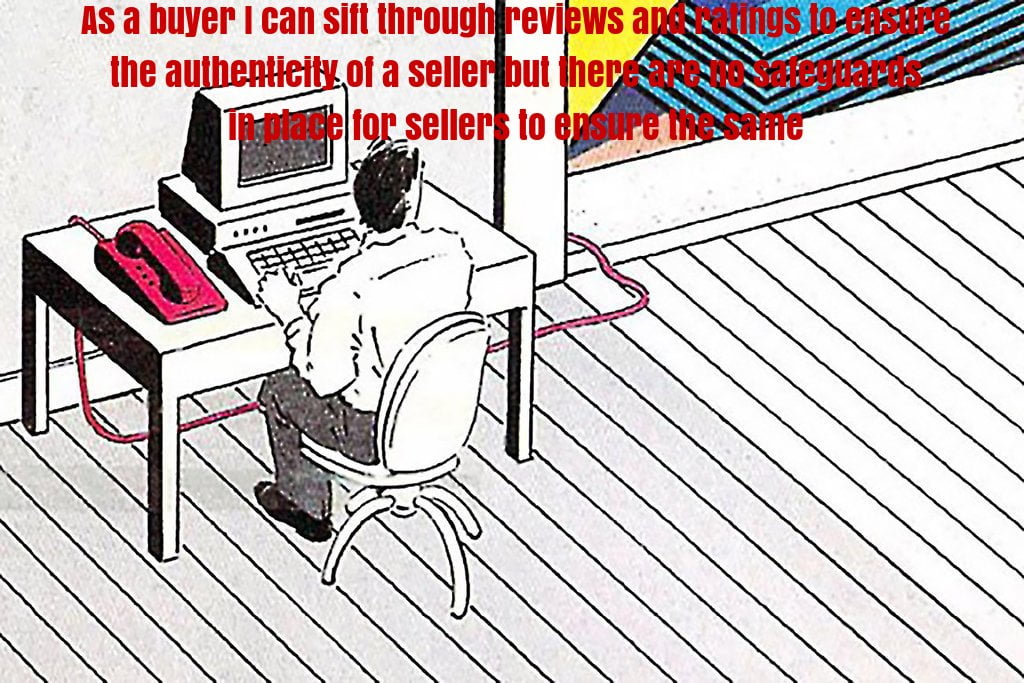 So, a while back, I wrote about the hassles, us consumers have to face in an online marketplace; the various scams we have to be weary of and the many many precautionary measures we have to take before making that final purchase. You can read about all of that right here.

But now, I would like to bring in a fresh perspective. As the infamous adage goes, there are two sides of the same coin.

When we order stuff online, it rarely registers with us that there is an actual person on the other side of the screen. I, personally never even thought to view the sellers as actual people, instead I saw them only as an extension to the ruthless multi-million dollar corporations.

And so, when my friend approached me with his tales of woe and told me about the innumerable difficulties he has to face as a seller, I was baffled as to why this hadn’t occurred to me earlier.

I know it’s hard to believe, but sites like Amazon and Flipkart are heavily customer oriented. Where I, as a buyer, can sift through reviews and ratings to ensure the authenticity of a seller, there are barely any safeguards in place for sellers to ensure that the customer is a genuine party to the transaction.

My friend sells lighting equipment and custom-made backdrops used for professional photo shoots online and he told me that he gets at least 15 fake orders every month and 99% of those returns are used! And there were times, when the orders were placed on ‘Cash on Delivery’, following which customers refused to accept the delivery by selecting a bogus reason which further hurt his ratings on the site.

Seeing as his products are custom-made, it would be reasonable to classify his product as a non-returnable item but apparently that’s against the site’s policy, because they only classify products like under-wears (keeping hygiene in mind), as a non-returnable product. So he suffers the losses, seeing as specially manufactured products can rarely be sold off again.

And the kicker? In the event of a dispute, the company will, more often than not, side with the buyers than the sellers.

Which becomes a problem because, unlike sites that act as retailers (for example, the official sites of Forever 21, Chumbak etc.), sites like Amazon in India act as an online marketplace and so it is only equitable to expect grievance mechanisms to be put in place to address both the customer’s and the seller’s complaints.

Also Read: You Can Now Set Up Your Own Online Shopping Site For Free

Lack Of A Loyal Customer Base

There’s no direct communication between the buyers and sellers. The only way to keep track of your orders is through the site you ordered it from, and the only way to have your complaints be heard is again through that very site. Any miscommunication is directed towards the main site which will address the situation as it sees fit, which is basically code for whatever is more profitable for the company.

Furthermore, according to this one seller voicing her concerns on Quora, courier vendors are the biggest snag in the entire process. In the event their gross incompetence manages to damage the product, the seller is the one who suffers the backlash and gets suspended.

This lack of communication hampers the sellers from creating a loyal customer base which, if they are able to properly establish, can ensure a regular income.

And the worst part is that start-ups and small ventures cannot afford to up and leave these platforms, since there are some hefty advantages to being part of such platforms, for example, being able to profit off of a ready and established market and not having to worry about infrastructure and overhead costs.

Moreover, a few sellers leaving would hardly be a cause for concern for these multi-million dollar corporations, which makes it obligatory on their part to ensure that the experiences of both parties on their sites is exemplary.