The untimely demise of Major Nisheet Dogra while manning along the China border has come as a great shock for his family and the army fraternity.

He was newly posted to take over an independent armoured squadron in high altitude area in North Sikkim and belonged to the 7th Light Cavalry.

A snow blizzard struck the temporary Chakda (a tin sheet supported habitat with improvised entry and exit on both sides) in which he was present on 9 January, 2019.

He was trapped six feet under snow and pulled out approximately 5-6 hours later by a search team of the same regiment. There are speculations that despite having a weak pulse, he couldn’t be evacuated due to road blockage by heavy snow.

Following this incident, the ones close to him have raised serious concerns about the working conditions of the army personnel in sub-zero temperature locations.

In a recent tweet, the father of the Army Major pleaded with the government to improve basic facilities like electricity for the soldiers at border postings. 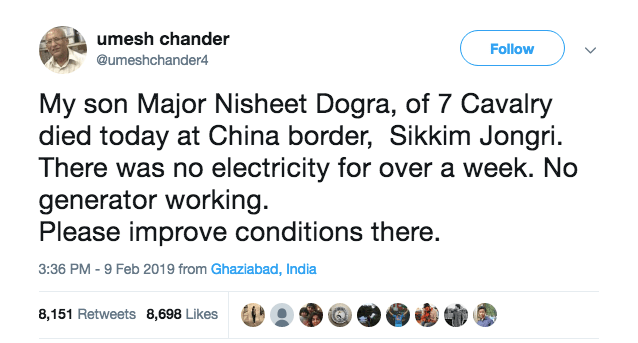 Civilians and Army generals took to Twitter to express their condolences and dissent with the current provisions for the army. Many Twitteratis even urged the government to address his father’s concerns.

We are aiming to become a global military superpower which fails to provide basic amenities like electricity to the army. Another day or so and this incidence will have lost its purpose like countless others.

Former Navy Chief Admiral Arun Prakash responded to the demise via a Twitter post which shared an anonymous account of late Maj. Dogra ’s last days. In a later tweet, he was asked about the anonymous nature of the erudite soldier’s post. 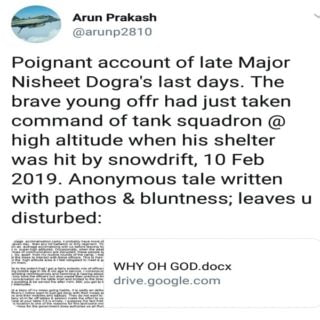 “I share your dismay. There could be many reasons. But it’s a fact that frank and outspoken persons have to be lucky to survive in prevailing culture and ethos. True in today’s politics, civil services, business and to lesser extent in military”, he responded.

Sadly, it is tragic incidents like these which force us to dwell upon the lack of resources when our army troops are sent to such dangerous missions in high-risk areas.

“We are talking about two and a half front war without being able to open the road to even one front. Imagine, it took 24 hours to evacuate a body. Nisheet Dogra’s death was tragic and highly avoidable”, the post read.

On the other hand, the official statement on Sunday read that the officer was given immediate medical aid. However, around midnight, the brave heart lost the battle of life and attained martyrdom on the line of duty.

Also read: Why I Am Disappointed In Dr. Shashi Tharoor’s Take On Sabarimala

This happened at a time when the Interim Finance Minister Piyush Goyal presented an outlay about the increase in the defence budget to more than Rs 3 lakh crore for the financial year 2019-20.

This is a mere increase of 6.87% in comparison to last year’s budget, notwithstanding expectations of a major hike.

In addition to this, “more allocations will be provided to the defence forces if needed,” he added.

We cannot possibly fathom the circumstances under which Maj. Dogra died. It is extremely essential to not miss out on Jawans who are relentlessly manning our borders .

That being said, we must start by considering their basic demands and providing them with top-notch equipment.

The political parties engaged in a tug of war over the important projects like Rafale leads to delay in commissioning the much-needed deployments which in turn again affects the armed forces adversely. Same old political vendetta all over again.

This incident speaks just one truth and  highlights a very important question, ‘are we doing enough for our army?’