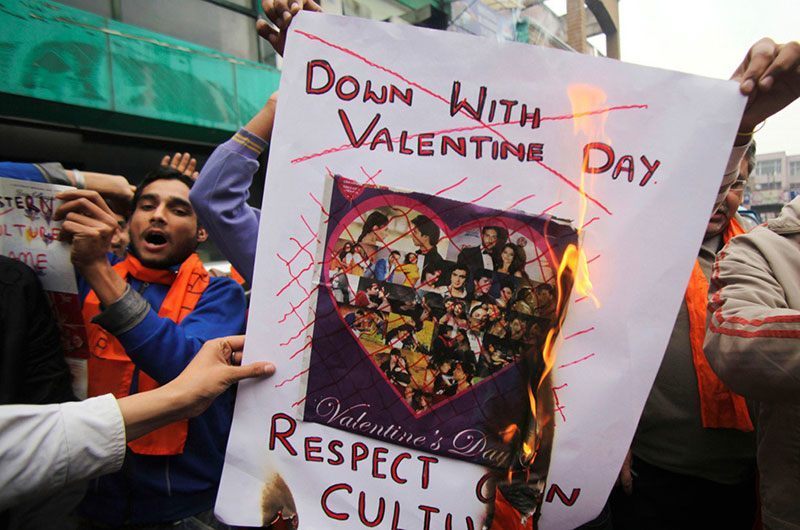 Are you single as a pringle and dreading the PDA you’re going to witness on Valentine’s Day? Then get those moral-policing-canes out and head over to Kochi to join in Kerala’s FIRST EVER Anti-Valentine’s Day March!

A group of patriots are taking to the walkways of Marine Drive on February 14 to dissuade misguided youngsters from profaning the moral values of Hindustan through displays of affection.

Though further details are yet to be mentioned, one can hope to have an exciting day of chasing after romantic lovers, married couples and even siblings (because, why not?). Extra points for a solid knock on the head!

You can keep those hockey sticks away for another day because there isn’t going to be an Anti-Valentine’s Day March. Not in Kochi anyway.

Dank Memes Malayalam, a popular meme page, created this fake Facebook event a few weeks ago with quite an interesting description: Those acquainted with the page caught the satirical tone of the event description and laughed it off while those who didn’t (bless them) spewed in rage.

The idea behind the event was a satirical attack on the moral policing incidents that have been happening in the state. There is a special reference to the incident on 8th March 2017 when the “valiant warriors” of Shiv Sena chased away couples from Marine Drive with the use of canes. The incident had led to the outbreak of the 2nd chapter of Kochi’s famed Kiss Of Love campaign on the very next day.

Valentine’s Day: The Event of the Year for ‘Im-moral’ Policemen

United by the cause of reinstating moral values in the Indian youth by becoming a public nuisance, moral policemen across the nation get together on February 14 to celebrate their most productive time of the year.

Just last year, Bajrang Dal commemorated the day by parading through the cities of Bihar, Jharkhand and Uttar Pradesh. They publically humiliated couples who dared to celebrate Valentine’s Day and forced them to do sit-ups while compelling the women to tie rakhis to their lovers. In Kerala, the story of a 23-year-old who took his life ten days after being harassed by a group of men for spending Valentine’s Day with a female friend shocked the public. The tormentors posted photos and videos of the duo on social media, which caused them to become victims of public abuse for days before the video was taken down.

So There Is No Real Protest?

Nope. Dank Memes Malayalam one-upped a good number of Facebookers with their witty event and have no plans on carrying out the fake protest. Hilariously, those who try to buy online tickets for the event are redirected to the booking page for Padmaavat!

I’m quite curious to see if anyone does turn up on that day, armed with canes and anti-Valentine’s Day placards. If nothing else, it sure will make an interesting read!

Here’s Why Judiciary Should Be Allowed To Have Emotions, Too