Getting a tattoo of your favourite music band on your skin or getting a ring pierced on your ears and nose are ways of making yourself feel unique and distinct from the crowd.

Such acts are classified under what is known as ‘body modification’, which refers to the deliberate alteration of one’s appearance to assert some form of identity. 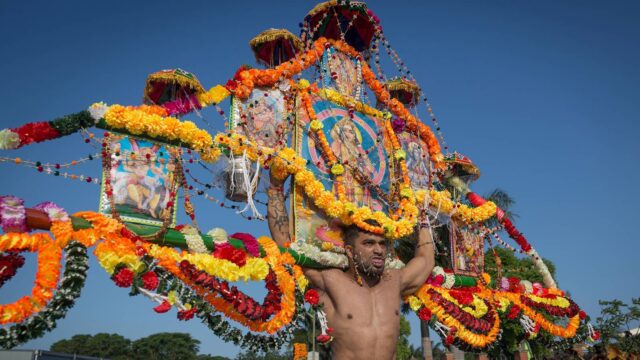 While tattoos and piercings are not harmful, people also engage in extreme forms of modifications that are detrimental to their health. Cosmetic surgery is one such way by which many people alter their bodies to feel “perfect” by either society’s or their definition.

The debate on whether such acts are good or bad has been going on for years. However, what kind of agency can one place on practices that are traditionally rooted in religion and cultures and performed by those who want to participate in such institutionalized practices?

The Rituals Of Thaipusam

Thaipusam is one such cultural festival in India in which devotees engage in extreme and harmful forms of piercings on their body. It is a celebration in which people of Kerala worship and celebrate Kartikeya, also known as God Murugan.

The devotees believe that on this day, the deity defeated an evil demon named Sooryapadmen using his spear called the “Vel.”

Also Read: Read About These People Who Underwent Extreme Body Modification To Look Like Animals

The celebration has been historically believed to ward off any kind of trouble or evil power and has been a sign of gratitude towards the deity. Kavadi Attam is one such activity where devotees carry a wooden carrier full of offerings for the deity and dance to celebrate.

However, they don’t carry these pots on their hands or shoulders. These vessels are hung on rods and spikes that are usually pierced into different parts of their bodies. There are different meanings associated with the different kinds of piercings.

The Garudan Thookkam, or Eagle Hanging, is one in which a person is hung using hooks pierced through the skin on their backs and paraded through the streets. They are not even allowed to use any painkillers. The act is believed to give them more endurance.

There are also instances of devotees walking over burning coal, and pulling huge carts by hooks pierced into their bodies.

Not Just In Kerala And India

This festival is also celebrated in Tamil Nadu and other South Asian countries such as Malaysia and Singapore. In Malaysia, it is a public holiday. Hindu pilgrims flock to the Bata Caves of Kuala Lumpur, where they climb 272 steps to reach the main temple.

There were talks of banning the festival in Singapore because of its very dangerous nature. Hence, the celebration has reduced in the country, however, it is still practised in Kerala and Malaysia.

The Debate On Body Modification

There is not much information available about this cultural practice as it has become normalised in accordance with the anthropological evolution of different human cultures. The festival has not been contested by anyone in the states of Tamil Nadu and Kerala.

While many countries such as the UK have discussed the legalities of such acts, it has not come to India because artificial modifications are not in vogue here yet. Hence, festivals like Thaipusam would go on to convince young men and boys to take part in such extreme piercings because they are normalised in Indian culture.