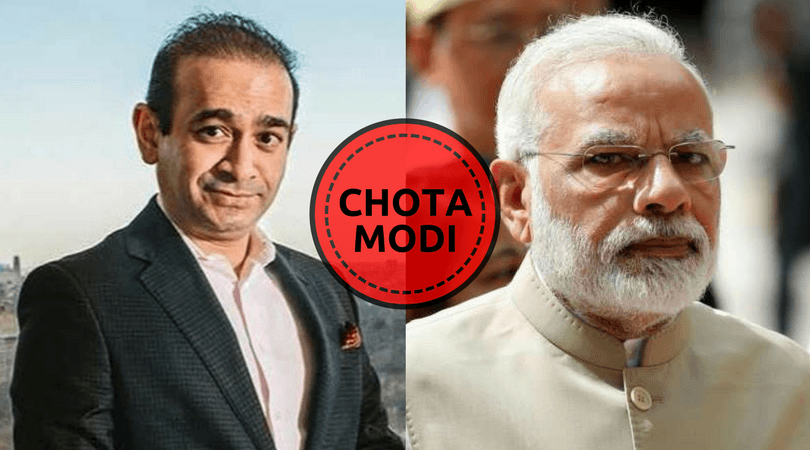 Union Minister Ravishankar Prasad, in a press conference, took strong offence at Congress’ remark of Chota Modi, a euphemism aimed at linking Prime Minister Narendra Modi with the diamond tycoon Nirav Modi who has been accused of a multi-crore scam.

The scam known as #PNBScam surfaced mid-February where Nirav Modi and members of his family allegedly cheated Punjab National Bank and caused wrongful loss of about Rs. 11,360 crores to the bank.

Soon after the news surfaced, opposition leaders took a jibe at PM Modi by calling Nirav Modi ‘Chota Modi’, a phrase comparing Modi with the alleged fraudster Nirav Modi. Opposition leaders have dug up a photograph of the World Economic Forum meeting at Davos where PM Modi is seen getting clicked with Indian businessmen and CEOs, Nirav Modi being one of them.

Speaking on the issue, Ravishankar Prasad said the remark is shameful, derogatory, scandalous and demeaning to the PM. He was angry. It makes me wonder how BJP didn’t see that coming. Chota Modi is such an obvious pun. Nirav Modi scammed PNB during Narendra Modi’s tenure as Prime Minister. How obvious can it not be?

BJP’s defensive mode makes one ponder how can it claim victim after being the prime creator of name-callings, jibes and evil acronyms towards opposition leaders and other parties. The fundamental bullying being Pappu.

Rahul Gandhi is Pappu. Everybody knows it and practices it. Then comes Maunmohan Singh. The raincoat jibe at former Prime Minister Manmohan Singh. Calling Sonia Gandhi Italian. Moreover, during an UP election rally, PM Modi said SCAM stands for Samajvadi-Congress-Akhilesh-Mayawati.

Flash forward to 2018 when Honourable Prime Minister Modi called Congress MP Renuka Chowdhary “surphnakha” (an evil character from Ramayana mythology) when he was delivering a speech during the budget session of the Parliament.

What, then, forced BJP to cry foul of the name-calling?

Chota Modi is comparatively decent and non-trolling. Even #NiMo being created following #NaMo. Indian politics strives on rhetorics especially after the magnanimous overpower of right-wing politics. There was name-calling when the 2G, Commonwealth, Adarsh, and Coal scam broke out. Not to forget all the Vadra bullying.

Hence, there will be name-calling when any scam breaks out in the present government, just how it was during last government’s tenure.

To be fair, the initial handling of the scam in BJP’s time is certainly praise-worthy. The offices and residences of Nirav Modi have been raided. The properties have been seized. Few officials of the PNB bank have been arrested too. Whether the culprit will be brought to India and tried or not, that the future will tell. But for now, it looks promising.

Watch Why Has Maldives Declared A State Of Emergency?

North-East Elections: How Important It Is For BJP To Win