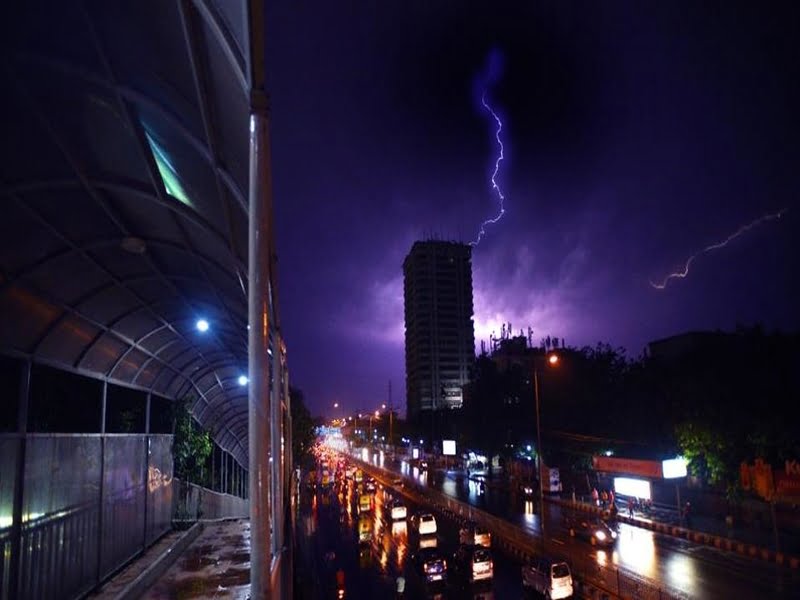 The Home Ministry, on Sunday, issued an alert for a thunderstorm in Delhi and 13 other states for the next two days. Thunderstorm, accompanied by squall and heavy rains is expected to occur in different parts of the country on Monday and Tuesday.

Following the alert, the Haryana government has ordered that all schools in the state will remain closed for the next two days. The Punjab government hasn’t issued any such order yet.

Dust storm and thunderstorm are also expected at isolated places in Western Rajasthan.

Just last week, 124 people died and more than 300 were injured as thunderstorms and lightning hit five states, including Rajasthan and Uttar Pradesh.

Let’s take a look at what exactly is a thunderstorm and how is it caused.

What is a thunderstorm?

A thunderstorm is a storm of heavy rain that is characterized by the presence of lightning and thunder. It is often accompanied by strong winds, heavy rains and sometimes, even snow or hail.

It is one of the most dangerous weather phenomenon. It can occur anywhere, although it is most common in mid-latitudes, where warm, moist air from tropical latitudes collides with cooler air from polar-latitudes.

Thunderstorms are often damaging as they are the beginnings of some other dangerous storms like hurricanes and tornadoes.

How is it caused?

As the rising air reaches its dew point temperature, water vapor condenses into water droplets or ice. These water droplets begin to fall on the Earth’s surface, and as they fall, they combine with other droplets and become larger.

The falling water droplets not just drag other water droplets with them, but they also drag cooler air down with them.  This creates a downdraft and as this cold air spreads across the Earth’s surface, it causes strong winds that are commonly associated with thunderstorms.

Also Read: How To Keep Yourself Disaster-Ready for Cyclone Ockhi

Why is the northern part of India experiencing such weather conditions?

Thunderstorms occur when there is moisture in the atmosphere, accompanied by heat. Warmer temperatures aid moisture retention, which leads to the formation of large, dark clouds.

In the summer months of May and June, India experiences tremendous amount of heat. Rainstorms and dust storms are often initiated by spells of intense heat.

At the same time, there is a development of large-scale air circulation system. Western Disturbances carry moisture from the European water bodies to north-western parts of India.

Moisture, when combined with the unusually high temperatures of Rajasthan and Haryana, causes devastation in the form of thunderstorms.

The temperatures in India are abnormally high at this time, and even though they may not be the primary cause, they aggravate the situation by making the atmosphere more unstable.

Why this sudden fear of the storms?

Dust storms, as experienced by Rajasthan and Western Uttar Pradesh last week, are usually not this intense, nor do they cover such a large area.

Having lost more than 100 lives to the disaster already, the Ministry is understandably concerned. Not to forget, the storm caused a massive loss of crops in these states. Crops worth thousands of acres have been damaged.

What makes this weather condition more dangerous than ever is that with the change in climate, more such storms are expected in future.

What to do if you are caught in a thunderstorm?

Thunderstorms produce lightning, which is a threat to life. Fortunately enough, most lightning-related deaths are preventable.

Keep an eye on the sky. If you see it darkening or notice flashes of lighting or increasing winds, beware.

If you find yourself in the middle of a thunderstorm, follow these steps to guide yourself to safety:

1. Find yourself a shelter immediately. Get inside a protective structure, such as a sturdy building.

2. If you can’t find a protective shelter, get inside a car. Make sure the windows in the car are rolled up and the doors are closed.

3. If you cannot find a shelter, DO NOT stand under a tree, power pole or other tall objects. Lightning strikes tall objects, and if the tree you are standing under is struck, you may be struck as well or injured by the tree.

4. Stay away from metal objects such as fences or a metal equipment, as metal is a good conductor of electricity.

5. If you are driving, park the car in a safe spot and stay inside the car with the windows closed and avoid touching any metal part inside the car.

6. Listen to the radio or television for latest information, updates and instructions to be followed.

7. If you are indoors, avoid water, as water too is a good conductor of electricity. Taking a shower or using the bathtub is a bad idea.

8. Do not use corded telephones like landlines as lightning can travel into home through any material that conducts electricity.

9. Do not use electrical equipment like computers and appliances. Stay away from power plugs at this time.

10. Stay inside at least 30 minutes after the last sign of thunder or lightning, as there is still a significant risk of being struck by lightning.

Take precautions and be safe. Stay inside your houses and go outside only if absolutely necessary. Listen to the weather forecast and pay special attention to any important instructions or warning that may be issued.

If you are stuck in a thunderstorm, you can dial the Government Disaster Management helpline number 108. The helpline provides assistance within an average time of 18 minutes, and can be dialled from mobiles and landlines across India.