Home ED Originals The Good, Bad And Ugly Of The So-Called ‘Debates’ On Indian News... 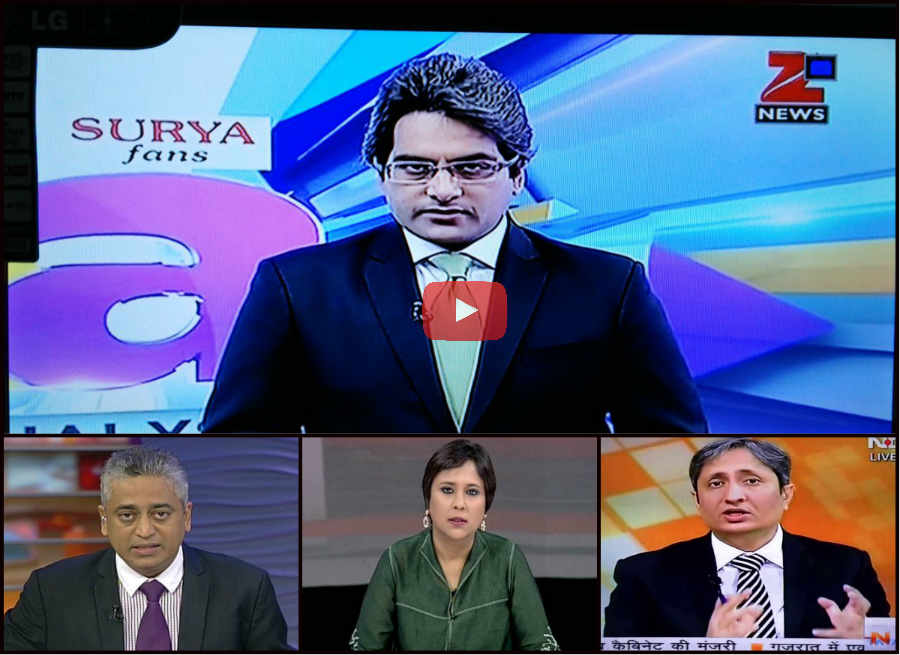 Indian Journalism is going through a phase that I wish I hadn’t witnessed in my lifetime, especially being a student of Journalism.

In all seriousness, I want to close my eyes very tightly and wish to see this madness gone when I open them!

The past three years have made Indian Journalism a topic of regular heated discussions and conflicts in spaces where it was non-existent earlier. People in their homes, their WhatsApp groups, and their workplaces have started having such heated and angry debates over their political preferences, media, and news. These discussions sometimes shape their relations with others and intolerance and outrage over some issues are not simply restricted to social media.

This, in my opinion, is largely because of Prime Time ‘Debates’ on News Channels. They have normalized the art of shouting and screaming in the name of ‘debates’. TV anchors have been made the hero/heroine of the discussion.

A lot of my non-journalism friends happen to like these anchors. Their reasons include:-
“Damn this anchor is so gutsy, talking to a politician in that demeaning tone.”

“He has the guts to say that we should attack and destroy Pakistan.”

“He is so confident. It doesn’t seem like he is lying.”

“He gets so many papers and quotes them. Of course, he is a well-read man.”

I am not kidding, these are actual arguments people have given me. These are extremely naïve and credulous of the media that is highly corrupted behind the scenes.
It is a no-brainer that news on TV presently is under the clutches of hyper-sensationalism and chest-thumping jingoism.

Watch these shows for half an hour and your blood pressure will shoot up and every possible hole of your body will be bleeding due to anger, irritation, annoyance or something else.

Unfortunately, this is what the news channels want.
It is easier to influence and convince people through emotions rather than factual evidence.

Clickbaity headlines, sensational misrepresentation of events, incomplete coverage, exaggerated coverage of non-issues to create a certain attitude amongst people, inherent bias and patronizing attitude towards critical issues have resulted in jutting out a horribly skewed understanding of national issues.

It is sadder when people consume these as news and validate their ignorant existence by calling themselves well-informed.

Also Read: Dear Media Houses When You Are Owned By Political Parties/Corporates, Then You Can’t Be Hypocritical And Cry Foul

Let me tell you straight-up! If your source of news solely is TV news channels, then you have successfully been duped to think that you are a well-informed citizen of this country and the level of your ignorance has crossed infinity.

In this article, I simply wish to highlight some of the good, bad and ugly of Indian TV news channels through some examples. See for yourself and look at the so-called content you are consuming.

You might think that this was the easiest part for me to write because there are so many examples. But NO! This is exactly why it was difficult. There is no dearth of crappy stunts to shoot up TRPs.

This was after the recent Sonu Nigam over loudspeakers. Which side were the two of these on, it really doesn’t matter. When a channel calls two such people for a ‘debate’, you know that it was never meant to be a debate in the first place.

This was before Swami Om became the cringe-worthy contestant of Bigg Boss 10. He didn’t create this personality for BB10. His “Ye acting hai” argument was never true! This is the real shitty person that he was since forever.

The journalistic ethics that existed at one point in time have gone to the dogs at present. Under the category of bad, I would want to put those examples where journalists gave out fake news or themselves fought with guests if there was a lack of panelists who could do that.

Even without panelists, Rahul Kanwal is horribly loud and condescending. Imagine when an extreme rightist tries to compete with him. Or stop, don’t imagine! Watch it yourself.

The level of confidence and hilarious level of seriousness in this report is something to look at. Even AIB covered this in their episode about Fake News on On Air With AIB.

Interestingly, Sudhir Chaudhary did an episode on ‘fake news’ recently and irony just called me to inform that it is committing suicide!

Okay, I was wrong, it is not the ugly that were the most difficult to jot down, but the good. Call it coincidence (or bias), but most of the attempts to bring back journalism to its roots have been made by Ravish Kumar. I know a lot of you have already begun to ascribe tags to me after reading this. But I’ll give you examples.

Now why I mention this one topic, because normally, Arnab makes you decide whether we should attack Pakistan or not in an hour of discussion wherein he speaks for a total of 55 minutes.

The ‘debates’ on other channels as well end without actually giving a solution or even a whole picture of the issue being discussed. It is mostly hyperbole with a severe lack of nuanced arguments.

But in this case, Ravish Kumar did a whopping 7 episode discussion on the school mafia that is literally sucking the life out of the parents’ money with exorbitant fees and other expenses. Each episode covered a different aspect of this loot and Ravish as usual gnawed through the layers of ignorance that have blinded us against this and other evils in this country that we mutely observe. The episodes began on 12th April and ended on 20th April 2017.

Link to the first episode:

Link to the last episode:

2.The Mime Episode By Ravish Kumar

Normally, TV debates have had loud, cacophonous, rude, staunch political personalities who appear on almost all debates across channels because they are the ones who fetch TRPs with their incessant screaming.

In such a scenario, Ravish Kumar brought out an episode that literally belonged to the extreme opposite side of the spectrum. It was in protest against the ban imposed on NDTV for a day. Nowhere in the recent past has any journalist dared to look at the administration in the eye and hit so hard!

Lastly, I would like to mention an incident when the Chief Minister of a certain State told Ramnath Goenka, the then Chief Editor of The Indian Express, that one of his journalists was doing great work. The next day Goenka called that journalist and fired him.

At present, Indian Journalism is at the exact opposite side of this spectrum.

You May Also Like To Read:-
Want To Be A Journalist? Then You Should Know That There Are More Than One Kind