Indian students have, for decades, viewed the US as the preferred destination for higher studies because of the migration possibilities it offered. The UK remained a poor second. In fact, the pull of America led many in the Indian government to lament the loss of India’s human resources through, what came to be known as, ‘brain drain’.

There were several reasons why India’s best and brightest migrated to the US. For one, American educational institutions were far superior to the ones we had in India and second, the US was looking for talent and the high-achieving Indian students found the US ‘pull’ to be rewarding.

Over time, this dramatically changed. India’s middle class grew and with higher incomes, so did the aspirations of their children. Simultaneously, India’s higher education system failed them. A significant demand-supply mismatch left many Indian students at the mercy of substandard institutions that had mushroomed and foreign education shifted from the ‘pull’ factor to a push-driven demand. Recognizing the significant revenue implications, several countries began to woo Indian students, such as Canada, Germany, Australia, Singapore and even, Ireland. In recent years, however, several countries started to tighten visa, employment, and migration policies. This impacted destinations of choice with the US, UK, and Germany sharply declining in popularity. Australia, with its enlightened study-work regulations, began to outpace traditional destinations and may well overtake the US in coming years.

It offers exceptional educational facilities, a highly livable environment, and strong employment possibilities. Out of the 35 highly rated universities in the country, six feature in the prestigious top 100 on Times Higher Education’s World University Rankings 2018.

The added fact is that Sydney, by any standards, is one of the world’s great cities and home to the prestigious University of New South Wales [UNSW], which is ranked 45 by QS and 9th for graduate employability. Its engineering program is considered the best in Australia and its business program among top 10 in the world. At the same time, UNSW views its relationship with India as a strong partnership that combines student enrolment alongside robust research collaboration with institutions of higher learning, the corporate sector and government cutting across various areas of developmental interest, such as, photovoltaics, cybersecurity, cervical cancer, quantum computing, waste management, sustainable housing, etc.

Vice-Chancellor Professor Ian Jacobs calls this ‘the Diya Initiative’ and has firmly embedded it in UNSW’s India Strategy.

Through the multiple partnerships that UNSW is forging across India, higher education collaboration may well emerge as yet another strong pillar in the India-Australia bilateral space.

Alternative International Universities are Fast Taking Over And Here’s Why 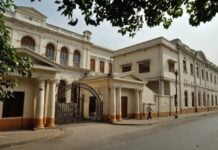