Home Politics Why Bhim Army Is Making The Right Noises 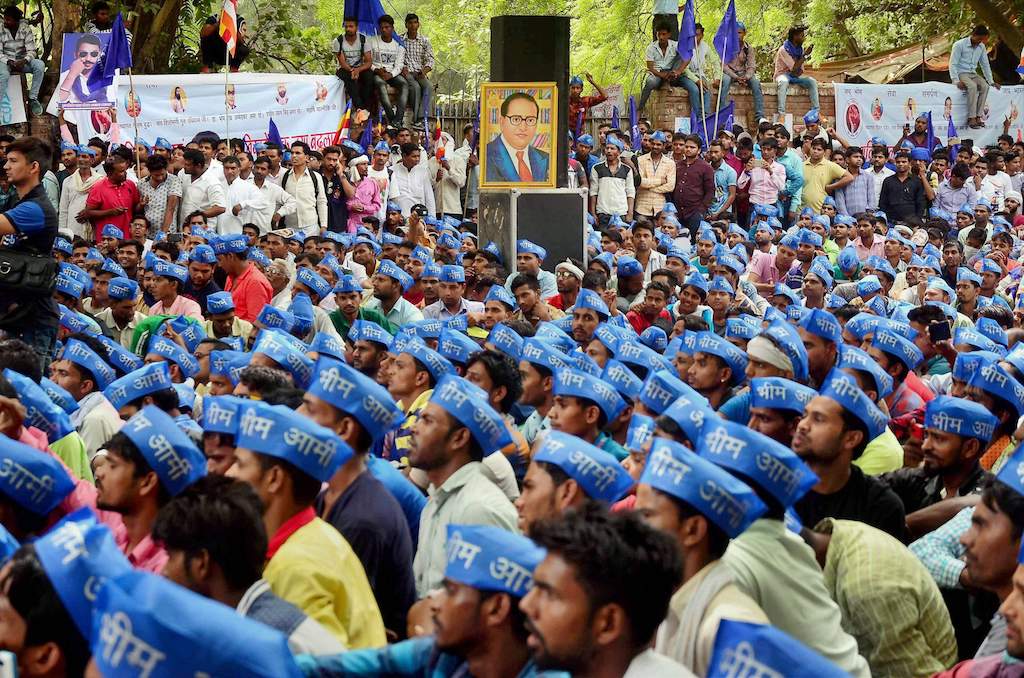 For years Dalits in UP have been oppressed and exploited. The emergence of the Bahujan Samaj Party was seen as an open window for throwing out the differences practiced against the Dalit community in the state. The condition did improve, however, there is still caste tensions in various parts of the state on a large scale, especially in villages.

Bhim Army is not just any other Dalit outfit demanding justice. It is getting bigger every day. Even the BSP and its chief Mayawati had to acknowledge its presence. What sets Bhim Army apart from others is that it acts and does not hesitate to resort to extreme and aggressive measures.

The aggressive nature is natural. This is hundreds of years of frustration among the community.

Chandrashekhar invited trouble and media attention to himself when he put up a banner at his native village which read as: ‘The Great Chamars of Dhadkauli Welcome You’.

The word Chamar is often used as an abuse by upper-castes, with or without intending to denigrate a caste. And Chandrashekhar proudly held his caste against the world, without hesitating.

This led to tensions between Dalit and Thakur groups in the village. (An obvious case of an upper caste person being threatened by the audacity of a lower caste person.)

Why Bhim Army is unique

Bhim Army works prominently towards educating children of fellow Dalits in various villages. The Army has hundreds of study circles across villages.

These small schools and coaching centers established by the Bhim Army for backward communities was a brainchild of Chandrashekhar Azad, and his associate Vinay Ratnam.

The schools and coachings are run by volunteers who are themselves college or school going students and their age group fluctuate from late teens to mid-twenties. Bhim Army has established more than 300 schools in Saharanpur itself.

“Most Dalit children don’t have access to good education. The government schools, where they generally enroll, are not good enough. And in private schools, Dalit students remain on the margins. Teachers ignore them,” a volunteer quoted in The Hindu.

Bhim Army also arranges scholarships and funds for backward class students who are unable to afford college fees. They also attend to ailing and violence-hit members and provide them with medical attention.

Also read: How To Do Stone Pelting In India: A Step By Step Guide

Bhim Army has been accused of perpetrating the Saharanpur violence that took place in May last year. The government was hesitating from arresting the chief Chandrashekhar as they feared it would make him a bigger hero than he already is.

In a shocking move, Chandrashekhar Azad was arrested on June 8 by the UP Special Task Force. The members of the Bhim army have alleged that he is being falsely implicated in 47 cases.

In June 2017, Bhim Army organized a protest at Jantar Mantar demanding the release of Azad.

Azad is not an ordinary person. He keeps a pointed moustache like a Thakur and has a body structure of a soldier. He looks different for a person of his community and is braver than a lot of politicians.

Incidents of vandalism against the portraits and statues of Dalit leaders are very common in rural areas of UP. Azad makes sure he goes to the police station to file a report, which the police officers usually decline to file.

Why BSP should worry

The Bhim Army poses serious threats and challenges to the Bahujan Samaj Party. BSP was the leading party to champion the Dalit cause but soon its tactics started being rendered inefficient. Further, the Bhim army does not like the way Mayawati carries on her political life.

Bhim Army’s growing influence over the Dalit community is harmful to BSP. The outfit is not only open for backward castes, but the membership is available to Muslims. In fact, at least 7-8% members are from the Muslim Community.

This is posing a serious menace to Mayawati, who not only brought together Dalits and backward castes but also is the pet favorite for the Muslim community in Uttar Pradesh. This brings a need for introspection in the BSP. The groundwork laid by the Bhim Sena and the immense courage shown by its chief is really commendable and can be a changing point in the politics of UP very soon.

For Dalit and backward community in the rural population of Uttar Pradesh, Chandrashekhar is emerging as an effective and charming leader. He is considered as Messiah by the Dalit people who are now beginning to see the light at the end of the tunnel after a very very long time.

Bhim Army could be a game changer. Its future looks bright and sunny. If everything goes right, we might see them contesting elections. However, what’s more important is that it must keep continuing to cause trouble to the troublemakers and uplift the backward classes via their beneficiary programmes.

Due to the changing political scenario in the country and the emergence of small student leaders, issues of caste discrimination has again hit the mainstream light. The matter in question, arrest of Chandrashekhar Azad, is now being addressed on a national level by Jignesh Mevani and his counterparts. Questions are being asked and the government is being targeted.

Why has Chandrashekhar, a potential/future lawmaker or leader, been kept in jail for more than ten months? We need answers. There’s an obvious conspiracy by all the major political parties because he belongs to none.