Home Entertainment Being Dumb Is Ok, Sonakshi, But Being Arrogant Made Me Lose Respect... 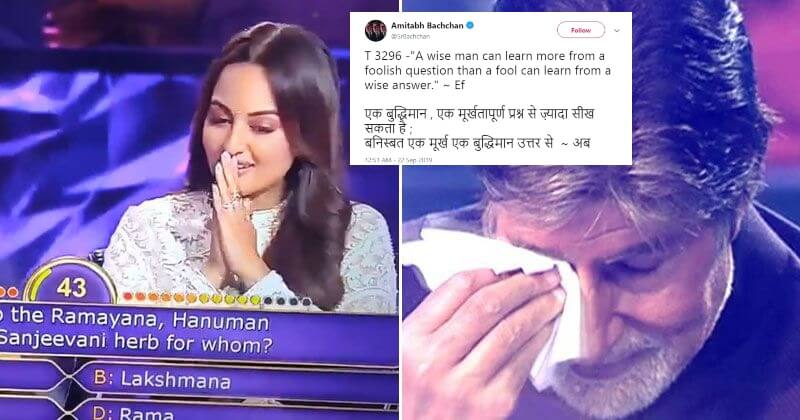 There is a big stereotype that actors are stupid and dumb. That they don’t have any intelligence in them and are mere puppets wearing fancy clothes and make-up.

This is even stronger for female actors who have to deal with being called ‘blonde’; ‘dumbo’ and more such words.

And to break this stereotype actors are increasingly trying to prove how intelligent they are. Also considering the social media age and the troll culture, actors take even one step after much consideration.

All that hard work was broken though on Friday night, 20th September 2019, when Sonakshi Sinha appeared at Kaun Banega Crorepati (KBC), the mega popular quiz show hosted by Amitabh Bachchan.

To be honest I was not that concerned since at that time I still genuinely thought that Sinha was a semi-intelligent person.

My illusions soon crashed and burned when the whole Ramayan question came on.

If you don’t already know the social media storm that happened after that question then you must have been living under a rock.

But since I’m not a rude person I will give a brief recap on what happened.

Sonakshi Sinha who was a celebrity guest at the show was partnered with contestant Ruma Devi, President of Gramin Vikas Evam Chetna Sansthan, an NGO in Barmer, Rajasthan.

During the game at a very early stage a question appeared that asked, “According to Ramayana, Hanuman fetched the Sanjeevani booti (herb) for whom?”

The 4 options given for this were:

Sonakshi could not answer and neither could the contestant and they ultimately had to take the life-line of ‘Expert Opinion’.

This had not only social media but even host Amitabh Bachchan shocked considering the close relationship she has with Ramayana.

Not only are her brothers named after Sita’s sons Luv-Kush but her father’s name, her house name and more are all from the epic textbook.

Social media had a blast with this considering how it felt like an Alia Bhatt 2.0 moment and #YoSonakshiSinhaSoDumb even managed to trend on Twitter for some time.

And although I also laughed at all the memes and the utter idiocy of the situation, some part of me also lost respect for Sonakshi Sinha after all this. Not just for her being dumb… but also her general behaviour during the episode. Allow me to elaborate:

The Way She Justified Not Knowing The Correct Answer

When she gave the wrong answer Amitabh Bachchan very correctly commented that,

To this Sonakshi Sinha replied that,

“Mujhe laga tha, lekin mai inke liye bahut nervous thi to chance nahi lena chahti thi (I thought it should be Lakshman but did not want to take any chance).”

I mean wow… way to shift all the blame on the poor contestant and make oneself seem like such a saint.

The reason this really ticked me off was because the contestant was genuinely someone who had worked her way up from nothing. She came from a very regressive place where females were not allowed any freedom, education or anything.

It was not such a shock that she did not know the answer to it. But Sinha very conveniently putting all the blame on her?! That was something.

Her Arrogance During The Episode

Besides all this her arrogance during the episode was also that struck me and made me rethink my thoughts on her as a person and an actor.

During the episode, the contestant was talking about how repressed women still are especially in her village.

“When a daughter-in-law comes to her new house she not allowed to eat ghee or jaggery. She can’t prepare halwa and have it if she wishes to some day. Only boys have that freedom to do it. Girls are only allowed to eat simple dal and roti.”

She then told how a woman from her village had 5 daughters and was subject to ridicule and insults because she was not able to give birth to a boy. People even said that her husband should be remarried to a woman who can do so. So she put all her girls along with herself in a water tank and killed herself.

It was after this really sad story that Sinha unnecessarily inserted herself into the mix by saying that,

It wasn’t even Bachchan adding her in, she herself did so and was trying to show how she had also done things to be proud of. There was clearly no need to add her credentials here, when the contestant had the spotlight on herself. Rather, had she been the bigger person and not stolen the thunder of the contestant, I probably would not have been so harsh with my judgment. 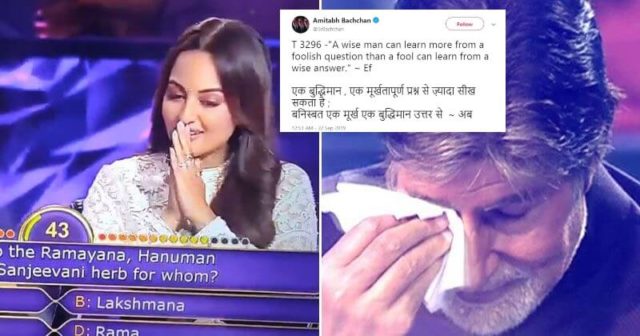 Read More: This Short Film Proves That Urban, Educated & Good-Hearted Men Can Also Deny Consent To Their Wives In Marriage

A few days later I came across this tweet by Amitabh Bachchan: 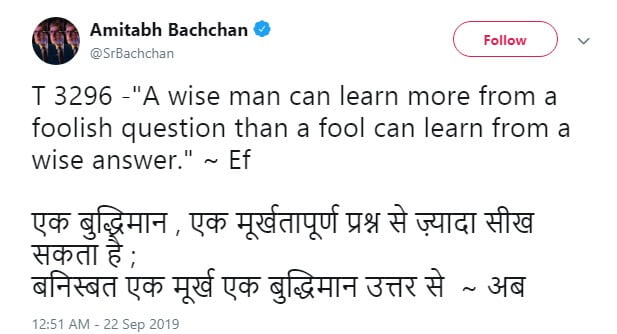 And to be honest, it seemed to have been posted a little too soon after the whole KBC episode. For a second it felt like he was somehow commenting on the entire situation without directly taking names.

Of course, it could be just me looking too much into it… what I thought until I saw some people in the replies also thinking along the same lines.

There were also some more memes and jokes related to Sonakshi Sinha’s gaffe and many thought the tweet was pointing to her in some way.

But all in all, it somehow was not Sinha’s wrong answer that really ticked me off, it was her overall attitude in the episode that completely changed my perception of her.